The sail, or to be more precise motor to Tarragona was long and uneventful. We set off early and the limestone cliffs of Sant Carles were turned pink by the rosy glow from the rising sun. There was no wind at all, so we were able to just let go most of the lines before John reversed out smoothly as I slipped the stern line. There was plenty of time for me to go round stowing the fenders and coiling the ropes before we even reached the channel markers. In fact it took us a good two hours to go round the head of the lagoon and come back level with our Z Pontoon berth out on the open sea. At first the sea was dead calm, but then the wind came up a bit from the north raising a chop, which became more pronounced as we drew near to the point at which the River Ebro reaches the sea, after being diverted through all the dikes and paddy fields. The wind was directly ahead, so no use at all for sailing, so we motored on. Lyra was being slowed by a current coming out of the river and sweeping along the sand bar it is forming, but eventually we reached the point at which we could set course for Tarragona. Here we received a boost from the river and the sea calmed down again as the wind dropped. It was a straight course across the bay and we settled down for the four-hour trip, taking turns to keep watch for lobsterpots and other craft. Nearing Tarragona I spotted ripples in the water beneath a flurry of seabirds. I called John and we watched our first dolphins of the season, though there was not much to see beyond the fluid dark backs circling low, as they were fishing and not interested in coming over for a look at us. 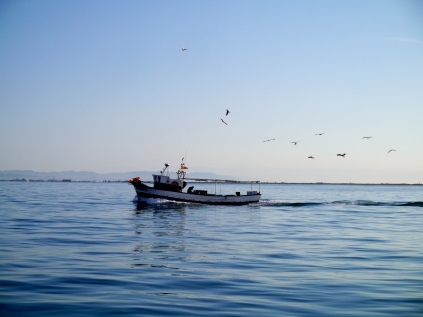 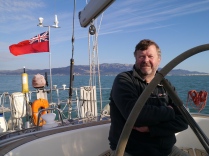 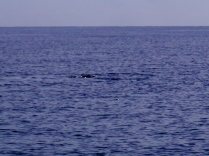 True to form as we came nearer to the point of having to park the wind started to build. What was worse was that it had swung completely round to the south, from which direction it would be pushing sea into the harbour and acting as a crosswind during maneuvers inside it. Our approach seemed to take forever. We passed a number of large cargo ships at anchor outside Tarragona and one that turned out to be moving, but which passed well ahead of us. Several fishing boats also passed us on their way in, trailing seagulls. Eventually we arrived outside the marina entrance. We waited for another yacht to turn to wind and take in his sails, before watching how he approached the entrance. Then I wobbled about putting out lines and fenders while John held us in the shelter of the harbour entrance. Once we were ready we headed in John trying to radio ahead in between a lively conversation in Spanish on Channel 9. The entrance was narrow and kinked, so we were glad not to meet anyone coming the other way. Once John managed to make contact the marina office was very efficient and sent us straight to our berth along the harbour wall. A marinera met us there, John reversed in and we handled all the lines pretty well. The marinera was helpful and pleasant and we were relieved to have the first berthing under our belts with no anxious moments.

After John had settled with the office we headed off into town, which is quite a climb.

This entry was posted in Sailing. Bookmark the permalink.