Tarragona is a lovely city in which history sits cheek by jowl with the present, sometimes erupting out of the pavements or hiding round the corner of a shopping square and sometimes spilling out onto the streets in traditional pageants and festivals.

The old town sits on top of the cliff overlooking the marina. To get there we either had to come out of the marina precinct, cross under the railway tracks and climb a steep hill. This is what we did the first time, repetitively overtaking the same two gentlemen out for a stroll, who kept passing us when we stopped to consult our map. On our way back however we discovered the escalators, which we then headed for. This may sound like a cop out, but the streets are impressively steep and we could have taken the “Tran”, a road based mini tourist train if we had been able to work out where to buy tickets that did not involve first climbing the hill. Tran, escalators and steep hill all culminate in a wide boulevard, along which trees line a wide central pedestrian walkway with traffic on both sides, then normal pavement with cafes and shops. At one end of this boulevard is a statue celebrating the human towers for which the region is renown. If we had been here on St Georges Day there would have been tower building events along with the libraries and the roses. It seems as though they will stand on each others shoulders here at the drop of a hat.

At the other end the concourse ends with a cliff terrace. When we first arrived on the terrace groups of teenage girls in leotards were clustered with their entourages chattering, dithering and in a couple of cases striking poses. We seem to have just missed some sort of display. When we made our way to the edge we could see the marina far below us on the left and the Roman arena to the right with the train tracks threading between them. This was not the top of the hill, above us was the old town, which has mediaeval and modern buildings with Roman intrusions.

We had passed through Tarragona on our way home back in October and had visited the amphitheater then. Our visit had coincided with that of a school party, a large one, probably an entire year group of junior school children organized into classes. When we arrived and paid our entry fee there had been no sign of them. As we emerged from the relatively small antechamber, which would probably have been very informative had we been able to read either Catalan or its’ Spanish translation, we could hear the massed chattering and looking up saw them being sorted into phalanxes, prior to the march to the entrance. It looked as though this could take some time, but nonetheless we felt speed was of the essence. We toured the arena exploring its various archways and levels, looking round at the views and imagining it all back in the day with a self-conscious urgency. 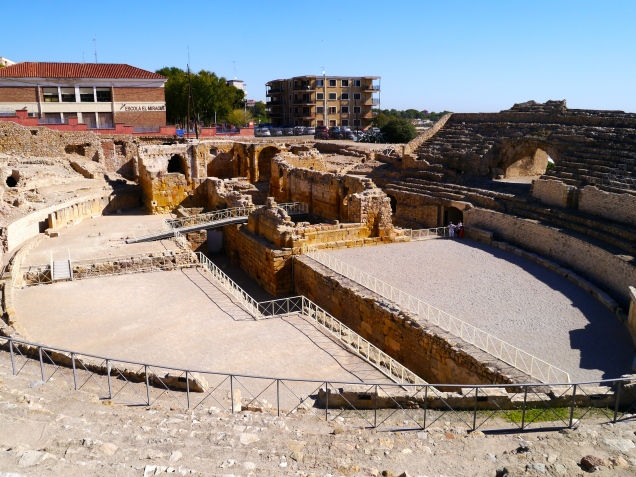 We had reached the upper level when the waters broke, down the first group came, only to be enclosed by afore mentioned display room. As they all had work sheets to fill in this held them up a treat and we were able to finish our tour and walk back out passed the straining hoards of their waiting classmates before any emerged into the arena below. We carried on up the slopes through some pretty gardens and peered over the edge as children finally fanned out joyously into the amphitheater below. John predicted gladiatorial battles breaking out, but such was the power of the worksheet combined with the glower of formidable ladies, that no such anarchy broke out. From our vantage point high above it all looked good clean fun. We then headed up into the old town and wandered through the narrow streets, where they were holding a festival of Tapas. Groups with booklets were going into the restaurants on some kind of culinary pub crawl and we struggled at first to find somewhere to let us eat a whole meal. Eventually John spotted a rather smart cellar tucked away down a side street, where the waiter tucked us round a corner beside a glass capped well, where we ate a splendid diner glancing down into the illuminated depths.

On this visit we decided the amphitheater would seem tame after our previous experience and headed straight up into the old town via the smart streets of the shopping center. We knew we were entering the old part when we turned a corner and came face to face with the backstage stables of the Roman circus. As we continued to climb we looked back to see a mural on the adjacent building, mapping the history of the area. Our climb turned a picturesque corner, where a restaurant spilled out onto the pavement all pink pot plants in white metal buckets. We then headed up to the Cathedral with its gothic façade set off by the steeply stepped street in front of it. To either side the buildings were mediaeval and rather lovely, though one was cloaked in scaffolding and the other marred by a large plastic bar sign. We climbed up to the Cathedral, but it was shut. Two rather grand wedding cars were parked outside with waiting chauffeurs, goodness knows how they came up there. We surmised the closure was due to a rather splendid wedding and explored up round the side of the building instead and found the back of the Cathedral to be the same combination of mellow stones and pantile roofs as the buildings either side. There was a pretty small garden with a fountain and a young woman had set up her easel to paint. Having seen as much as we could we retraced our steps to the pretty restaurant we had spotted on the corner. 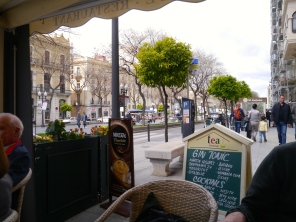 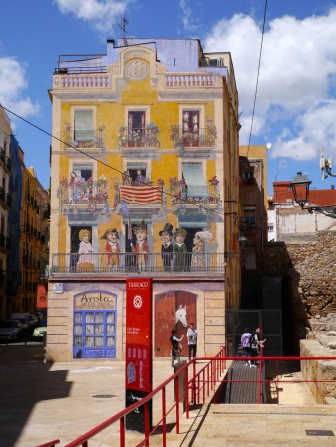 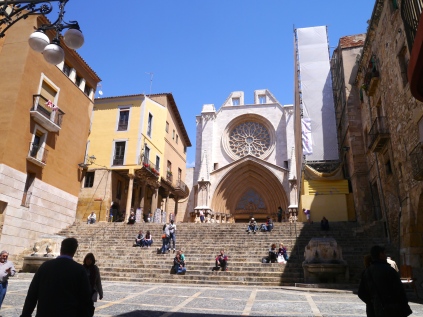 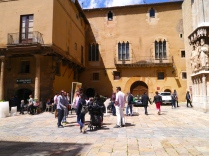 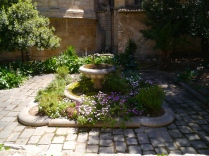 We had planned just a light lunch, but one look at the menu put paid to that, even though it was entirely in Catalan.The retaurant is called the Cucafera, a reference to another of Tarragona’s festivals when papier-mache models of mythical beasts roam the streets. This particular beast is a sort of fat fire breathing crocodile, it could be a dragon, but in papier-mache it comes out looking like a fat fire breathing crocodile, with maybe a trace of dachshund. Given the reference to fire I chose something baked in the oven, aubergine topped with melted cheese, while John opted for penne in spicy tomato sauce. This all sounds healthily vegetarian, but a layer of rather delicious bolognaise was hidden between the aubergine and the cheese, so veggies beware. To start we shared a tomato and mozzarella salad and an exquisite plate of squid in sauce so good I mopped it up with lettuce from the salad, when we had finished the bread. Neither of us could face desert, but we had café solos and were glad it was downhill all the way back. Dinner was a run round the table on Lyra.

The weather forecast is for stronger winds than we would care to face tomorrow so we plan to have a walk along the front and gawp at the super yachts.

This entry was posted in Food, Roman remains, Sightseeing. Bookmark the permalink.