Marmite that is, not Texas tea.

Although the magic of the black jar allows for infinite scrapings our supply was coming perilously close to exhaustion. Things had reached such a pass, we had resorted to eating healthy fruit and yogurt breakfasts to eke out our store. We had great confidence in being able to provision in Gibraltar and set off for the border with our backpack. The traffic jam heading in was winding and horrific, but on foot we passed swiftly through border control, virtually ignored by the officials. Once through there was a queue of mini buses offering tours and a rash of London buses ferrying people into town. True to our quest we ignored these temptations and went forth on foot. We had to wait at a sort of level crossing barrier for an aeroplane to land, before being allowed through to walk across the runway. 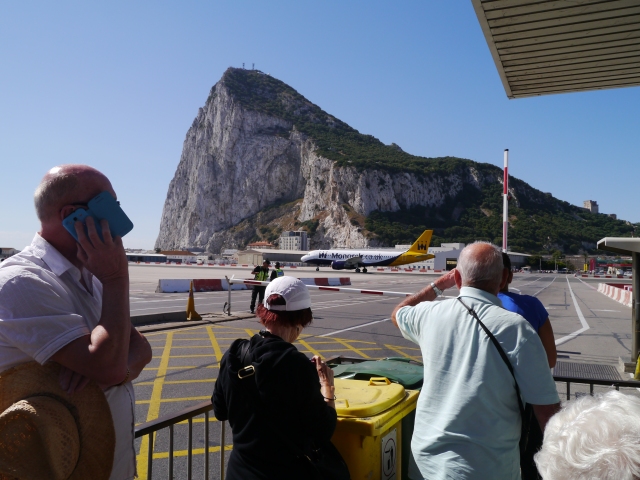 Looking left we could see one end of the runway with nothing beyond it, looking right there seemed an infinite stretch of concrete, but we knew this ended in the sea less distant than the harbour wall. It must look frighteningly short from the air. The day before I had watched a plane climb at a fifty degree angle, as it had took off. On we marched and soon came to a pleasant square of fish and chip shops and sat at an open air café to drink coffee and make a recce . Opposite us I spotted a Tourist Information Office, for which we then made haste.

The girl inside gave us a map, showed us where we were on it and circled the attractions. We asked her to recommend a restaurant, not English, and she marked the spot of two tapas bars, one of which apparently had a beer pump on each table, which made the Captain’s eyes sparkle. We did not mention our quest for the black stuff in case it put paid to the urbane impression we were affecting. Furnished with our map we set off down the Main Street, which had the atmosphere of an English high street some years ago, before the advent of Starbucks and Subway. There were lots of little shops among the long standing big names, mostly jewellers and shops selling cameras. The place is a melting pot, cafes offering “Full English” next to tapas bars, hanging baskets nestling under palm trees. I half expected to see a Woolworths. We paid tribute at the shrine of St. Michael, and were blessed by shorts and a T-shirt in return for our offerings. Then came lunch at the tapas bar without beer taps, too focused were we for such indulgences. There we charmed the proprietor with our determined use of Spanish. This was just as well, for she scorned the use of English from German folk, who shortly arrived at the next table, shrugging at them in a manner to suggest “Even these poor specimens, (us), know the word for bread”. My Duo Lingo-ing had finally paid off. Even the Captain was impressed; he had thought I was speaking French till that point. By the end of our meal she was teaching us specialist vocabulary.

Refreshed we set off again. Finally we spotted a small supermarket and stole inside, but there was only Bovril to be had. Disappointed we threw ourselves into the exploration of the nearby museum, which boasted a display of Moorish baths. We watched a film about the history of Gibraltar, which those north of the border here might take issue with in places, before touring the exhibits. These were an eclectic and somewhat shabby mix of stuffed animals and old model guns. The Moorish baths were an excavation in the cellars of the museum, with arched ceilings punctuated by eight pointed stars. The text said the stars had originally been designed as skylights and there were photographs showing daylight shining through them. The images could always have been photo-shopped, but I fear the stars were filled in modern times, probably when a museum was ploncked on top of them. We ventured upstairs and into a room filled with a whale like model of the Rock, sat in a big glass case and walls lined with black and white photographs of Gibraltar in the early part of last century. The model brought home the strong resemblance between the Rock and the isolated mountain in Close Encounters of the Third Kind. The notes from the film played in my head for the rest of the day. Bong, bong, bing, bong Bonng, I give you the earworm for free. By this time we were almost overcome by the pervading smell of damp and beat a hasty retreat.

Mustering our resolve we set off along the old battlements, where the guns now point at the modern high rise and car parks built on reclaimed land. We shadowed some school children in smart white T-shirts into a park of pink apartment blocks and continued through landscaped gardens to a metal gate. Through the gate we could see Nirvana, otherwise known as Morrisons. The gate was locked. We puzzled over this cunning challenge, pressing and twiddling a plastic knob in the wall. “Try pulling it” suggested the Captain. It came off in my hand. I was guiltily trying to shove it back in, when a friendly native woman with a pass key came by and kindly let us out. Down the street we charged and into the hallowed halls, where we were instantly transported back home. For not only did the shop look the same, the stock also seemed identical to that back home, though why anyone would choose to buy a watery English cucumber rather than a crisp Spanish one is beyond me. Up and down the aisles we ranged, till among the condiments my leader spotted Bovril and despaired. I remained undeterred, knowing the cunning ways of Supermarkets with yeast based products I asked an assistant. Aisle 10, we narrowed in on our quarry and there it was opposite Home Baking, hiding amongst the jams, not just one size, but a range of jars. We put one the size of the planet into our basket. To allay suspicion we added a few sundries – lettuce, natural yoghurt and, daringly, cheddar cheese and swiftly moved through the tills and back out the door.

Now to escape with our stash. We wound expertly through the streets, steering by the Rock. We hurried across the runway only to come to a grinding halt. The traffic in and out was now moving freely, but the queue of pedestrians had reached Disneyland proportions, and we feared there would be no entertainment as we stood in line. With lightning reflexes and an uncompromising expression the Skipper steered me into a group of workmen and middle-aged ladies gathered to one side. As the line of others snaked away from us we were allowed through, expecting to be unmasked and turned back at every moment. Our passports held good amongst the identity cards and we made it to the bag check. Fortune favoured the brave; our contraband was stashed deep beneath yogurt and lettuce. The official gave my leader a pitying look, and shook his head that a man could sink so low as to consider such foods, before letting us through. We emerged, blinking, into the sunlight and made good our escape with the pot of treasure. The shape of breakfasts to come.

This entry was posted in sight seeing and tagged food, Gibraltar, Marmite, Shopping. Bookmark the permalink.