To the Apes Day One

God must have Gibraltar down as a piece of Blighty, either that or he is smiting us and this takes the form of dank misery rather than thunder and lightning fireworks. 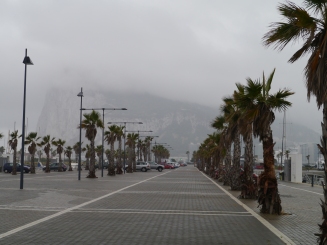 We woke, feeling cold, to grey skies and drizzle, which soon turned to persistent rain.. The Rock huddled miserably in a duvet of low cloud. It seemed a poor day to go visit some soggy monkeys, so we stayed below decks and read for a bit. At the first break in the weather we set off once more to buy time online. Solving a problem with the chart-plotter network had gobbled up our whole months 2 GB capacity. We headed off into La Linea in our waterproofs without much enthusiasm for the task. It again proved fruitless and we were both rendered rather soggy, when the rain came back not long after we had set off. We bought some things in the local supermarket and headed back, stopping for lunch at the marina restaurant.

This is housed in a prefabricated building in the middle of the car park, with an extensive fabric awning, which rattles as the wind blows through it. The décor is simple, with white plastic garden furniture inside and out. Inside the awning is furnished with two big television screens on which, at night, the likes of Shakira and J- Lo undulate sulkily. It seems to be a favoured haunt of the guarda on their way to interrupt people crossing the border. The service is friendly but extremely intermittent. That it was the main recommendation for restaurants in the area on the Spanish side underlines the relative poverty of this side of the border, which is a pity given the stunning location. This is the most disadvantaged part of Spain we have seen, though we’ve only explored on foot and further on might be quite different. Along the side of the marina a lot of building work is underway, which might point the way to a better future, as the marina must bring in plenty of money, most of which currently heads off into Gibraltar. Slowly.

We returned to Lyra and I was able to catch up on the blog. Now the rain has stopped and John is cleaning the boat in a howling wind. The wind has come whistling through here each afternoon so far, so we intend to get an early start when we leave.

To the Apes Day Two

When I was a very small child I was grasped by a monkey at Bellevue Zoo. I am not sure whether I remember the incident, or have heard the story from such a young age that it plays in my head as a partly out of body experience. I am between my parents in front of the monkey cage feeding two monkeys with banana through the mesh. At the side of us are smaller monkeys watching enviously, but their cage netting is too fine for them to be included. Mum is breaking the banana into pieces and handing them for me to pass on to the monkeys, first to one, then the other.” One for you, one for you, one for….”but the bigger monkey thinks otherwise, reaches through the mesh and takes hold of my hand. In the same instant Mum grabs the monkey’s wrist and, though staggered by the chill of it, holds on and Dad slices into both of them with a karate chop, which leaves Mum’s fingers tingling and the monkey backing into a corner rubbing its’ poorly wrist. Largely unperturbed I say “Naughty Jo Jo” ready to pass the banana piece to its rightful recipient, who has not budged, when a panicked lady appears, stopping all the fun. She takes us inside somewhere so Mum can sit down. She tells us the monkeys we had been feeding are vicious and bite, they need the stronger bigger mesh to keep them in, the finer stuff holding the littler monkeys is to protect them from us humans. A sign might have been a good idea. There are plenty of signs around Gibraltar making it clear that feeding the apes is both ill advised and illegal. Here the monkeys wander round freely in packs, so must be well able to fend for themselves. Today we set out to visit them. Neither of us felt keen, but neither did we want to chicken out, so we went on an authorized tour.

Our guide was Gibraltar born, bred and proud of it; he put me in mind of Humphrey Bogart in The African Queen. He took us, an English family and a group from Belgium in a mini bus for the tour. We would recommend it. First we drove round the other side of the island round past the lighthouse and mosque at the far end and then up to the Pillars of Hercules viewpoint. There we could see the length of the Straights laid out below us. There was Africa, close as the Isle of Wight looks from Lymington.

Down in the bay the big ships we had rubbed shoulders with a few days ago moved like tiny toys across a deep blue backdrop. We took photographs of one another at the rail. Then we were all back in the bus and up even more steeply to St Michael’s cave. 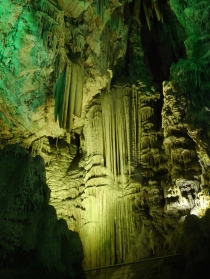 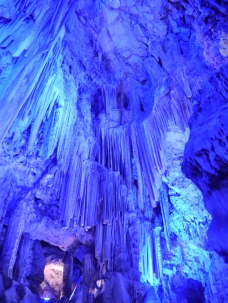 This was an underground wonderland of stone waterfalls, pillars of rock Gaudi would be inspired by, washed by coloured light and classical music. The colours veered on the vivid side and, despite the wonderful acoustics, I longed to experience the cavern in silence, but with a constant dribble of people walking through, that would never have happened. As we exited there were stairs to deeper caves, to be explored separately with a guide with an underground lake. Very tempting. Out we walked and back to regroup at the gift shop and then on to the Apes.

The Barbary Apes are actually macaque monkeys, brought in as pets from Africa, probably by the Moors, and adopted by the British army. They are wild animals, living in troupes, but are clearly accustomed to interacting with humans. Seeing them was like no monkey experience I have had before, more like having the dolphin follow the boat, with an element of danger attached. Our guide took us to a troop he knew, telling us to ignore any other monkeys we might come across when out of the bus at the attractions. Friendly or not he was careful to only open the van doors one at a time, as he said they were lightning thieves if they could get in one door and out another. Once we were all outside the van, he slapped its’ side and a big male loped across and sat on the bonnet. The guide stroked him and pinched his cheeks, before asking if the young boy in the party would like to hold him. Bravely he stepped forward, made a cradle with his arms as instructed, and the monkey just climbed on to him and sat to have his picture taken. He was happy to sit, but reluctant to face the camera, because his attention was focused on some workmen drilling noisily on the other side of the road. As the dominant male, he was obviously keeping an eye on his territory. After the youth a woman from the Belgian party held him, then the boy’s sister, who had him on her shoulders, as our guide thought he would be too heavy for her to hold. As it was she looked swamped by monkey and a bit uncertain about it. After that the macaque jumped off to investigate how the drilling work was progressing. Our guide took us to the other side of the road, ostensibly to show us the view. As he was talking a littler monkey came up and the young girl was able to cradle him for a picture. Then the big guy came running over and the guide said to the little monkey “ Go on then, he’s coming”, but the youngster was already scarpering. The big monkey had another photo-shoot with the boy and the other Belgian lady. I’m afraid I chickened out. He seemed very gentle, but smelled awful. After everyone who wanted to had held him, the guide wanted the monkey to show us his teeth, but he kept them under wraps. I have seen their teeth and think this was showmanship on the part of the guide, to put the shivers up the ladies who had just been holding the monkey. After that we climbed back into the bus a door at a time. As we drove off the smaller male rode on the bonnet for a while. Our guide had his window down and tried to persuade the monkey to ride on the sill, but he would not. I think the presence of the workmen probably distracted them from some of their usual games and party pieces. As we drove off we passed a square of concrete strewn with oranges and other food for the macaques. They are obviously well catered for.

Our next stop was the tunnels, made by the British during the Siege of Gibraltar and used to fire canon down at the French and Spanish in the Napoleonic war. The view from outside showed us the Atlantic on one side, the Mediterranean on the other and the stunted runway filling the gap between them. We wandered down the tunnels to the strains of Gay Gordons, played jauntily on recorded fife and drum. Replica canon had been placed in most of the firing positions, parting rope curtains, designed to catch sparks and stop them coming back to ignite the waiting gunpowder. The view down the sheer limestone face from these canon holes was dizzying. Apparently an insurance company logo used to boast that it was solid as the Rock of Gibraltar as our guide said, we now knew the Rock was riddled with holes. The excavated stone is used to reclaim land from the sea, that was how the runway was built in World War II. 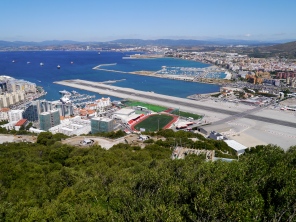 We drove down into town past the old fort tower and finished our tour at the far end of the High Street. We headed off back to Ocean Village and had a nice lunch in one of the bars there. On our walk back to the boat we ran into Nick and Judith, who we had met in ……and had a chat. They had had a miserable crossing. They had sailed closer to shore than us and been caught in some overfalls, a sailing term for rough sea caused by waves interfering as they cross each other at the end of points. They had encountered standing waves three feet high. I’m glad we took the long way round. They are staying in Gib for the weekend, but I think we will be moving on to take advantage of a lull in the weather tomorrow.