We woke early and motored across to the arrivals pontoon to pay, rather than walking all the way round. As we approached it dawned on us that at half tide it was going to be a bit of a hitch up from the deck of Lyra to the concrete pontoon. John did the honours, vaulting up onto the concrete and wrangling Lyra into position. Self consciously, as one is after such a display, he headed off into the office. The staff there doesn’t seem to look out of the massive plate glass windows in front of them. The girl asked what his boat was. John gestured to Lyra tied up outside, told her the name and which berth we had occupied. She picked up the walkie-talkie to ask the marinera to read our electricity meter and after speaking to him gazed up at John in alarm, “But your boat is not there Sir”. John resisted the temptation to tease her and explained his boat was the one tied to the jetty outside.

After that we set off round the corner into Gibraltar, where the diesel is duty free and so astonishingly cheap. Of course there was a queue, or rather a huge motor yacht was filling up and a second sailing boat in the middle of what was left of the space, so we had to wait adrift in the middle of a nest of super-yachts. John did a fantastic job of keeping the boat still in the windy conditions, while the man in the smaller sailing yacht clambered onto the quay and disappeared into the office to pay. Back outside he jumped back down and they set about springing off from their stern line, conscious of wanting to miss the massive yacht in front of them. Half way through the marinera decided they had done enough and cast them off, gesturing us to approach. He was most complimentary about Lyra and was very helpfully walked us back when we came to leave. Then we were back out into first the bay and then the straights. 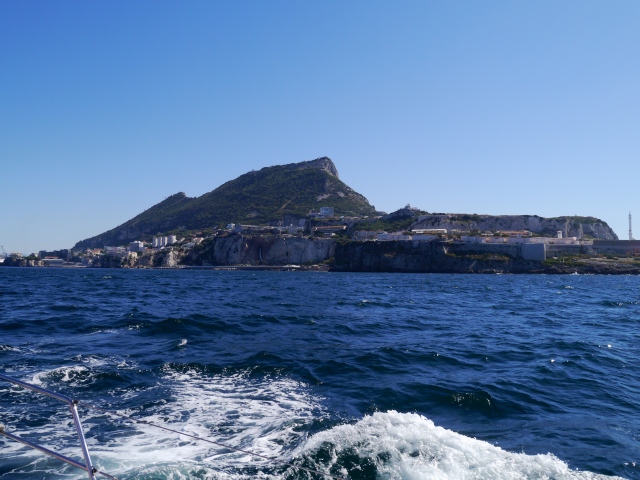 It was much quieter than when we had arrived. Ahead of us a yacht was going out under sail. Sometimes people do this to have right of way over other craft. From our vantage point on the Rock the day before, we had ascertained that collision regulations were largely abandoned and a might is right pragmatism adopted instead, so kept on under engine till we had cleared the melee. The forecast had promised us a nice beam reach all the way to Estepona, but in the event the wind was dead astern, so we just pulled out the foresail. This gave us between five or six knots and, as we had all day, we sat back and enjoyed it. Soon we had sailed past the lighthouse and the modern white mosque at its side and were looking at the other side of the Rock. The realisation dawned that we were actually in the Mediterranean and had completed a major part of our sail to Greece.

We pootled along sunbathing for a couple of hours, with not a lobster pot to be seen this side of Gib, then the sail began to flap lazily as the wind dropped. John wound it in and we proceeded under engine, much less peaceful, but twice as quick. Half an hour outside Estepona the wind came up and was blowing force six, whipping up lots of chop in the little harbour as we came in and again had to wait another yacht to move, this time on the arrivals pontoon. When we did come to tie up the wind made life awkward, but the marinera was magnificent, leaping around catlike, making one rope do the work of four. I think there must be organized marinera contests for the man who can secure the biggest boat with a single length of rope, every marinera we come across is reluctant to use two lines where one will do. This one, though, was a star; not only helping us come in, but also casting us back off and then supervising o 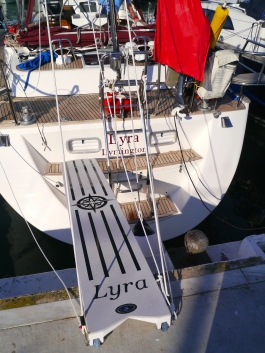 ur first stern to mooring. He left us wedged in tight between two other yachts held by a drum tight lazy line. Although our helper sprang ashore with no effort, John and I unveiled the passerelle, a posh gangplank, which had been waiting in the front locker all last year. Then we were off and down to the nearby jazz bar for a cold beverage or two and to marvel at the drink carrying capacity of the waiter there.

This entry was posted in Sailing and tagged La Linea, Mediterranean, Straits of Gibraltar. Bookmark the permalink.