Estepona is a lovely spot. On arrival, we had been pleasantly surprised by the pretty marina front, with its blue and white paintwork and peaceful atmosphere. 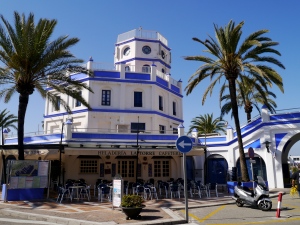 From the range of attractive restaurants we chose an Italian on the upper level and ate watching the sun set over the now calm sea. The wind had completely died and later, from below in the darkness came the strains of accordion music. Today we walked into town, which, once past the fish dock, was a pleasant stroll along a palm fringed promenade looking over a narrow sandy beach. Small oases of palms and the like had been planted at intervals in the beach around open air showers. Opposite the sands were gardens; vivid with short sunflowers and spectacular pink gingers, with benches looking out to sea. We struck off into the old town, heading towards a prominent bell tower. 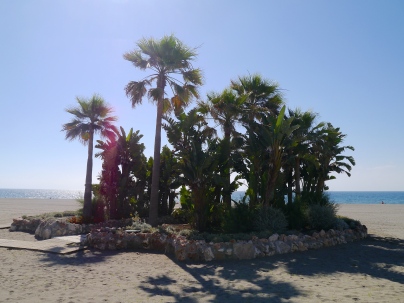 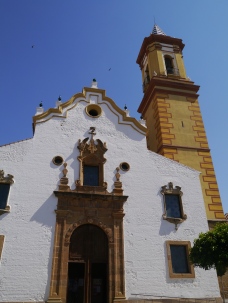 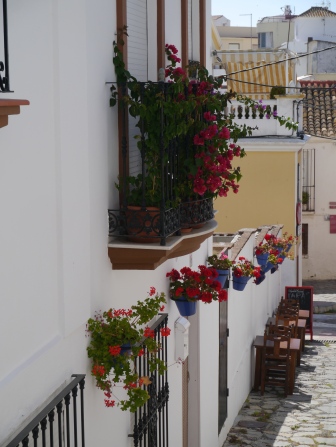 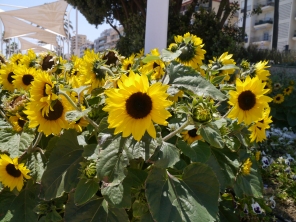 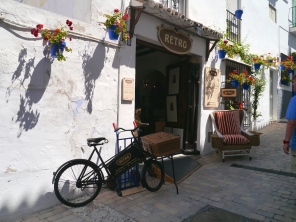 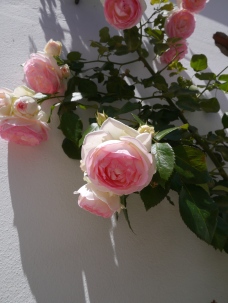 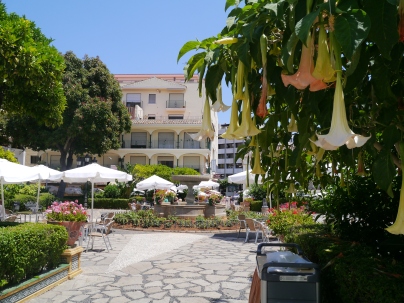 The old town is a wonder of stage managed prettiness on an epic scale. The mainly white houses have black wrought iron balconies, painted shutters and pantile roofs of terracotta. All along the walls range pots of geraniums, usually bright blue pots and red geraniums, though one street sported all green pots and another brick red ones and occasionally plants with pink or white flowers had snuck in, but the general effect was of rampant colour coordination. The old streets wind up from a shaded square with a large fountain to the church with its’ bell tower. We looked inside, the church was immaculate and looked to be decorated for a wedding, with sprays of flowers on a palm leaf at the end of every other pew.

Then, joy of joys, we came across a haberdashers. On the wall opposite the door were orderly rows of spooled ribbons, laces and braids behind a glass counter holding close packed plastic tubes, the end of each sporting a sample of the buttons within. Next to the counter were floor to ceiling shelves, filled library style with bolts of patchwork fabrics in ditzy patterns, arranged so toning shades pressed together temptingly. After peering through both door and window I ventured in. Beside the fabrics were stands with spools of thread in a myriad shades, in the corner a door to the back, but the wonders continued along the back wall, with a smaller counter leading up to the window, between which and the entrance was another bookcase full of fabric, I had not anticipated. As I browsed oblivious, John amused himself by watching a young couple at the counter have a silent, highly gesticulated argument each time the lady serving them disappeared into the back, stopping abruptly on her return. As they were paying John handed me the wallet and went to wait outside. Apparently their argument exploded into full force once they emerged into the street, but not able to follow the rapid Spanish, he was none the wiser as to the cause. Inside the shop a feminine peace descended and, with the help of another prospective customer, I managed to buy some quarters of fabric and matching thread. I feel I was most restrained in the circumstances. 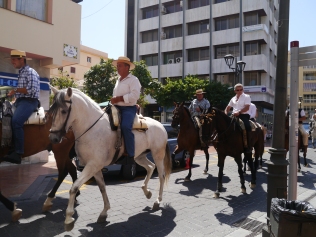 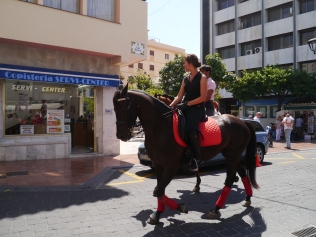 We strolled back into the main street in time to see a parade of horses ridden by men in traditional Don costumes. I snapped away at a scene straight out of a Jack Vetriani print, except in the midst rode a young horsewoman. They headed off to the main market at the side of the ruined tower, so mobbed by a coach party we had decided against going in. Instead we wasted another air conditioned half hour waiting our turn in yet another Orange shop, there were still no data simms to be had. We heading back to the square for lunch. Although it was one o’clock nobody was eating yet, so we started with a drink. We sat in the shade outside a bar, so we could tell which establishment our waiter came from and use the toilet. As it turned out the whole of the centre of the square and our particular corner belonged to just one bar with one waiter, who was a model of efficiency. He used the hedges as a stand for his tray and seemed to pull menus from a stash behind them on demand. Every full tray he brought out held drinks for at least three tables and he managed to serve the correct order to each. A lesser mortal would have been run off his feet, but this man merely looked to be concentrating hard, dispensing pleasantries as an afterthought on his way to the next job. As we sat parties of noisy older people drinking coffee gave way to lunching families with small children, who were quieter, but more given to chasing the pigeons. After lunch we wandered back along the promenade to read and catch up with the writing, if not the posting, of the blog.

We had planned to walk back into town for the evening, but clouds were building over the mountains and the forecast was for rain, so in the event we stayed by the marina. For a change we went to the Indian restaurant and enjoyed our respective curries with okra, and nan bread. As it happened the rain came after we were in bed. It poured, evoking caravan holidays as the rain drummed on the cabin ceiling. John opened the blind and, on the skylight we saw glittering drops, in the flashes of lightning, before rolling thunder drowned out the sound of rain.

This entry was posted in sight seeing and tagged Estepona, Haberdashery, rain, thunder and lightning. Bookmark the permalink.