Saturday was spent doing chores and stocking up with provisions. That evening was the Champions League final, between Real and Athletico Madrid. I expected to be spending it in a bar full of Spanish men, but the skipper turned television engineer on me. Alan and Sheila had included a small flat screen TV when we bought Lyra and it has been on board, lying face down in a cupboard ever since. I had more or less forgotten it existed. Anyway in a remarkably short time John had tuned it in and channel one carried the football. The Spanish commentary was reasonably easy to follow, mainly comprising familiar names and drawn out exclamations of GOOOOOOOAL, though it carried all the excitability of radio broadcasts. We cheered for Real, in spite of Ronaldo, on the strength of their flair and so had a very satisfying evening in front of the telly.

Sunday we were up early and waiting for reception to open to hand in our pass keys and get our deposit back. Then we cast off bound for Barbate. The weather was set to be fair, but the wind slight and awkwardly on our stern quarter. The sea was still lumpy, but I was fortified by Stugeron and able to keep at my post. Once out at sea we tried sailing and it was very pleasant, but our pinking shear track showed we were making little forward progress, so we motor sailed – basically sailing with the engine on, thereby going much faster and in this case allowing for a better course. As we neared Cabo Trafalga, site of Nelson’s last stand, John spotted what we think were dolphin in our wake. At first I struggled to see what he meant and then I saw them, more than thirty big dark commas just below the surface, strung out in a line. It was like a scene from Dr Who. They never broke surface, not so much as a fin, and there were no blow spouts to suggest whales. In truth they seemed small for whales, but big and shy for dolphin. We saw them as shadows in the rise of the wave behind us for a while, then they moved off to our starboard side and then were gone. They may have been tuna, there are tuna nets outside Barbate, marked on the chart, but were not shoaling like fish. Later on we did see dolphin break cover and play in the bow wave, the first of this season. They were both big and black, but I am not sure they were our mystery creatures. 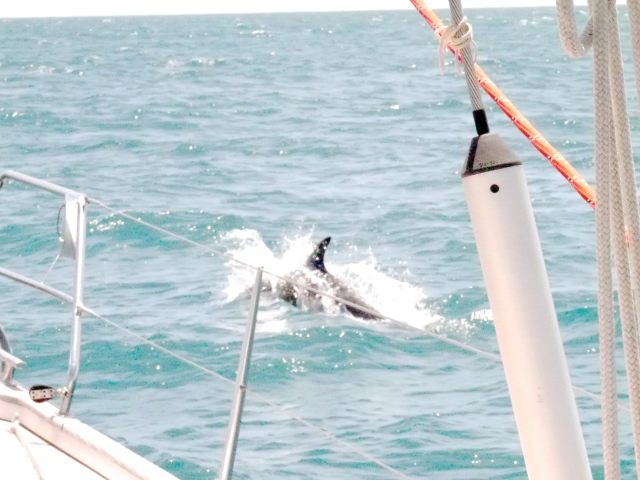 It was exciting to see dolphins again though and naturally I took more photos. As we neared our destination John pointed out a faint shadow on the horizon – Africa.

We managed to miss the tuna nets and arrived in Barbate at five, to be told to pick our spot. 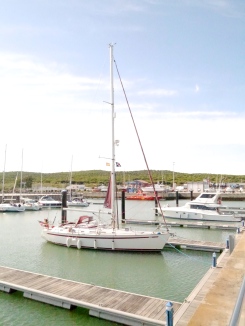 The marina was pretty empty, but had the longest pontoons we have come across, with cleats so widespread we struggled with the lengths of rope involved. It is a big marina with lovely flowering bushes, gorse and oleander, planted all around, but is nonetheless a concrete ghost town, the haunt of skinny cats. We wandered round the perimeter and found abandoned buildings, but no other people. Then we encountered another English couple walking the other way each lugging a large plastic container full of diesel. It turns out they are on a similar route, so we may well keep meeting up, but then again maybe not, as we are all in a constant state of flux. They were heading off to Gibraltar straight away next morning and after thinking about it and looking at the dearth of activity around, we decided to do the same. 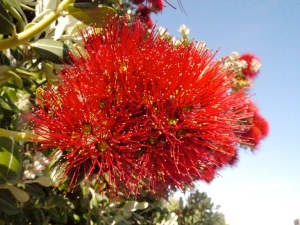 The pilot book advises setting off from Barbate at low water Gibraltar, to make most use of the tide flowing into the Med. In our case this meant setting off at quite a civilized eight am. Nonetheless we both struggled to come round, still tired from the previous days sail. It was well worth it though, one of those early mornings when the air seems new and the low light sets everything aglow, which somehow seem even better on the water. Our weather forecast was for increasing wind on our stern, so we motored, keen to arrive before the wind came up too strongly through the straights. On the way we passed a stand of modern windmills, eerie in their languid, unsyncopated rotations.

At first our progress was opposed by a strong tide, but Lyra has a powerful engine and we still made over six knots. Africa loomed ever closer. We could see the white high rise of Tangiers catching the morning light like chalk cliffs and the serrated mountains to the left of it culminating in a giant massif. The sea was slight, but choppy, the surface laced with foam. Radio traffic was busy, with both amusing and alarming messages in English and a certain number of messages we could not understand. Rounding the corner we could see the big ships moving along the shipping lanes, which we kept well clear of.

We passed the lighthouse at Tarifa , which looked a pretty spot and caught our first sight of the crocodile snout of Gibraltar, nosing out from the next headland. At this point we picked up the tide and rushed along at over eight knots, the chill wind, still following us, coming up stronger and whistling through the rigging. 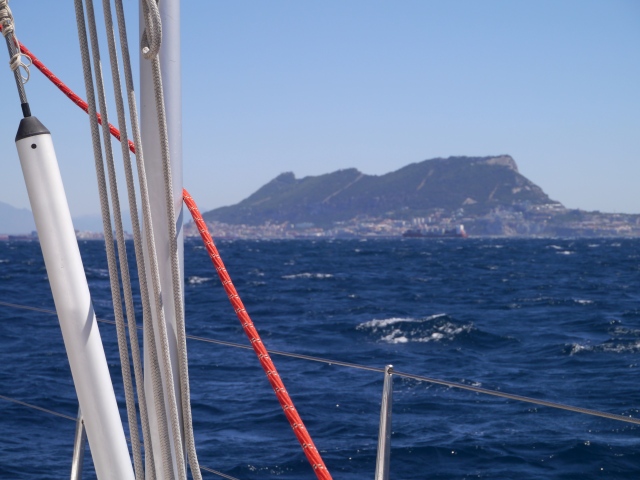 We turned early into the harbour to minimize the amount of side on motion we had to take from the choppy sea. 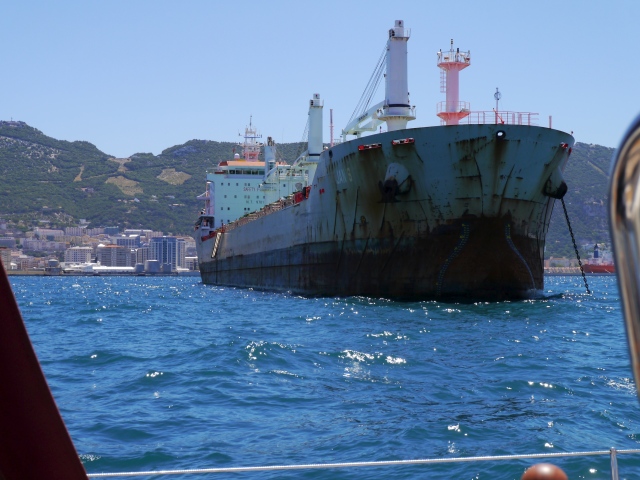 John was busy giving way to bigger and faster vessels heading for Algercias, dodging behind the huge ships at anchor and trying to spot the harbour entrance. I kept checking details about vessels on the AIS, but had to give up when the screen was full of red flashing targets. As we headed deeper into the bay, the soaring Rock grew more and more impressive. Finally we saw the marina entrance and John circled in the calmer waters of the outer harbour as I put out ropes and fenders.

We had elected to stay at La Linea, just on the Spanish side of the border, as we had been told it was less busy and more secure than marinas on the British side. The reception pontoon was a daunting concrete edifice, with what looked at first like metal girders bolted at intervals along it. These turned out to be hard rubber buffers, but not wishing to risk Lyra’s shiny gel coat we tied up round the corner in front of the offices. Despite being in plain sight of the main office, just round the corner from the fuel pumps no marinera appeared to take our lines. There were marineras about because the receptionist was busy flirting with them over the phone, leaving John hanging around waiting to check in, which did nothing to improve his mood. It also did not help that she treated him like a minor aggravation and failed to provide us with the usual marked up map of the berth we had been allocated. As we cast off to head for it two marineras suddenly appeared, drawn by the roar of our bow thruster, in time to smile, wave and say Hola as we pulled away. It was one of those occasions when I wished to be young, glamorous and able to pull off one of those “don”t you wish you’d come out sooner boys” sort of looks. Needless to say neither of them ventured out to help us come in to the berth. A neighboring yachtsman came over to take the lines, for which I was most grateful. We were securely tied up by the time the wind built up and later we saw the boat of the couple we had spoken to the day before also safely in. In fairness to La Linea it is a generously proportioned, immaculate and very sheltered marina, with an iconic view of the Rock. If you were to build a top hotel, this is where you would wish to site it. 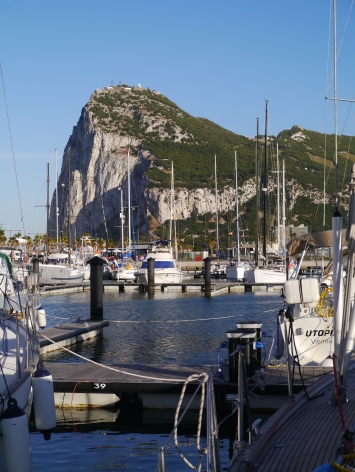 This entry was posted in Sailing and tagged Dolphins, Gibraltar, tide. Bookmark the permalink.