Our master plan was to make a swift passage along the French coast before the season really was underway, so it would be less expensive and so that we would be able to book into the busy marinas. Our delays due to weather had put us about a week behind schedule and we planned to move on each day this week to catch up, yesterday Bandal, today Bormes, tomorrow St Tropez and the day after Juan Le Pins. The plan lasted as long as Bormes les Mimosas, which was just too pretty to resist staying longer, so we have booked in for two nights and plan to spend tomorrow on the beach.

The day had not started well, when our bowline would not come out of the heavy chain. I tugged and wiggled it as best I could and then John came and tugged and wiggled it also to no avail, so we had to radio for the cavalry. A different marinera sped across in the same faded red tender and released us and we were off into a lovely morning. The wind was on our nose all the way, but there were plenty of yachts out for a sail taking advantage of it and tacking across us. John looked at them a bit wistfully and I asked whether he wanted to sail around a bit, but he fancied finishing the passage, which was a relief to me. The little marina here is very attractive wound about with low hills on which palm trees and pines grow together. As soon as John radioed in a marinera motored to greet us and show us to our reserved spot. John asked him for help with the lines and he made it all seem very easy. There are lazy lines here; we never thought we would be so pleased to see the mucky old things. John soon had us tied tight on both sides and we went over to the office to register. John still resolutely avoids saying more than Bonjour and Merci in French, so has taken to having me accompany him to the harbour offices. Since he has done this they have all spoken English and I just stand there like a spare part. At least here there was a lovely view from the tower of Lyra in the marina below, so I took some snaps with the camera. 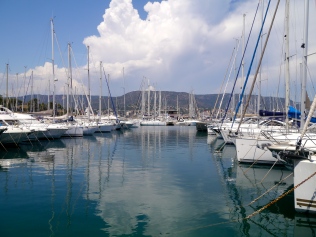 Around the marina are a few restaurants and bars, but most of them were clearing away as we passed by on our way to the office. In the spirit of exploration and a certain reluctance to be the only customers somewhere John suggested we have a look at the beach. It was just a few yards behind the marina, where the bay bends in and out again, and is just an idyllic crescent of golden sand. There was indeed a bar, fringed with short palms and staffed by the beautiful young. John had a beer and I had a Mojito, I had planned on an alcohol free one, but our barman set off confidently without looking where I had been pointing on the menu.

It felt very decadent sitting looking out over the loungers and parasols with our drinks, just come off our yacht. St Tropez is next, but we cannot think it could be as lovely as this and are glad to be staying longer.