In the marina reception at Bandol is a print of a poster dating from before the War. It is of the style of the old tourist illustrations by the likes of Graham Sutherland and John Piper, when they needed to earn money. It shows a group of elegant ladies in cloche hats and tea dresses on the palm-fringed promenade. In the foreground are by brightly painted lanteen rigged fishing boats. A similar boat was bugging us during our attempts to drift alongside the fuel dock yesterday. When we headed out into the town there was a whole raft of these craft and though the fashions may have changed the atmosphere with of the palm lined streets of tall buildings in muted colours with shabby chic shutters seemed unchanged from that evoked by the poster. We two did not present so elegant a picture as we strolled along the prom and then crossed the street to sit in the pavement extensions of a bar. The beer was wonderfully chill and as we sat John decided we needed a break from the boat and took out his phone to look for a restaurant recommendation for the evening. The top of the list had just two stars, the lowest rating John had ever seen. This seemed dire news as the website usually starts with the highest. Then he realized it was the place we were currently sat in. Tripadviser was obviously warning us to leave post haste. I will not name names. The beer was excellent though. John gave up on the internet and we planned to come out and wander round again later. 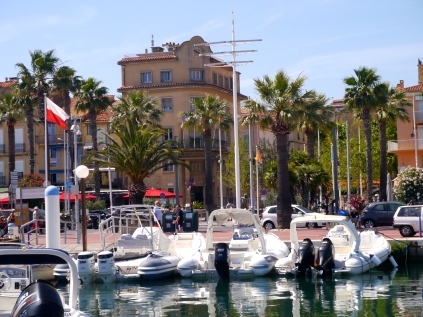 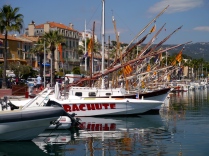 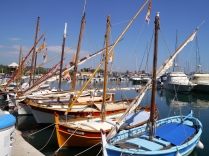 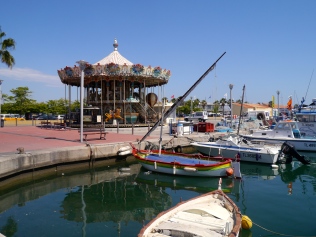 At around seven thirty that same evening a lot of the bars and restaurants were either in the process of closing or were actually closed. Just off the main street were a couple of restaurants with glass boxes set up across the pavement overlooking the shrubbery along the roadside. We chose the least posh looking and sat studying the menus printed on the tablemats. The waitress thoughtfully brought us over an English translation. One item at the top of the entrees, Antoinette, had not been translated. I had visions of some form of tart favoured by the doomed French queen. We looked it up. Little donkey, ‘our Gracie’ would be horrified. True to the English stereotype we both chose beef.