The Fort at Last

Saturday was a rough old night, we were tossed to sleep in a gigantic cradle and I was awoken at seven by the fishermen’s siren. Why they should want to be going out is beyond me. John slept through it, so I dozed along next to him. Half an hour later there were voices on the seaward side and the roar of a bow thruster. Still John slept. Then came a sideways jolt as we were buffeted by another boat. John was up and out the companionway. He came slowly back and said a boat had come in, a couple on their own like us, and the marineras had done a great job of bringing them in alongside using an inflatable to push the bow against the wind. He made a cup of tea and said he was feeling rough. I sat up to drink it and soon realized why. It is possible to feel seasick in harbour. By the time we were up and dressed neither of us could face breakfast, so we headed to shore. Most of the cafes were not yet serving, but I had an idea where we were heading. We had stopped once for a shudderingly strong coffee at one of the places with ranks of tables set outside overlooking the sea. John had looked through the menu, which a big plastic wallet full of laminated colour photographs, at which one could point. John had fancied a plateful of bacon and eggs. He was obviously feeling better. This time we ventured inside away from the wind. I looked through the menu. All sorts of things were jumbled together, but the smallest thing I could find was a chunk of tortilla with half a raw tomato. I could not face it, so ordered what looked like a smaller version of John’s breakfast, one egg and a couple smaller bacon rashers. It was rather a sunbleached image and when it came turned out to be escallops of pork, egg and chips. They had put me an extra piece of pork on for good measure, no doubt impressed by my constitution. At that moment in time I had my doubts, but felt I could not waste the food having ordered it. I like pork, but this was an effort and John helped me out, though I must say egg and chips for breakfast was surprisingly good. Set up for the day we headed off to try the fort again.

Success. We climbed the steps and the gates were open allowing us to climb a lot more steps, well over a hundred. Between the sets of steps the ground sloped up. To lay siege to this fort one would need to be fit, and possibly not to have just eaten a plateful of pork, egg and chips. We marauded slowly, pausing every so often to recover our breath, admiring the already impressive views. The Fort loomed above us, an irregular pointy structure with inward leaning walls made from a mixture of worn stone sections and smooth concrete. We assumed the concrete had arrived around the time of the Second World War as it had the look of wartime bunkers on the English coast. Eventually we reached the base and wound round to be greeted Renault five parked on a concrete platform offering a panoramic view of Roses. How it managed to reach that point was unclear. There were more steps up into the entrance, which suddenly looked very modern and businesslike with heavy glass doors on chrome hinges. 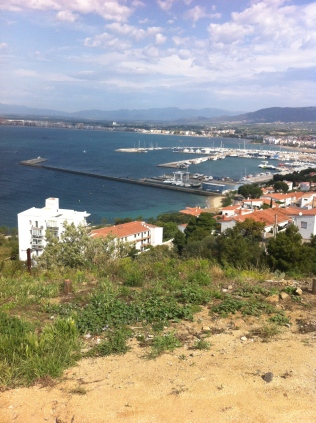 We paid at the large desk and were given a guide sheet in various languages out of which we teased the English bits. There was also a brochure in Spanish explaining the exhibition of photographs they were currently showing. We started with the photographs, which were views of the Costa Brava taken in the early thirties. We could just about make out the dates and places. They were full of the atmosphere of a world about to disappear. The places were unrecognizable, but for a few strong geologic features and a more ruined version of the Fort we stood in. Sturdy ladies posed against lanteen rigged fishing boats, children in oversized clothes gawked at the camera and gnarled men grinned over their cigarettes. Lorette La Mar was just a series of beach huts on the strand and made me think of Margery and Douglas, who we met in India in the eighties. At the time they were both seventy and Margery had warned me not to name my hoped for baby after any of the places in India. They had honeymooned in Spain and she had nearly called their daughter Sally after the pretty little fishing village where they had stayed. When she thought of how Lorette Le Mar was now she was glad. I wondered if this was the Lorette she had been so taken with and still think it a pretty name.

John handed back the paper about the exhibition and we started on the Fort. It turned out to be a prototype, built using the latest techniques, given the shape of a four-point star and sloping sides. Putting a fifth point around the entrance to protect it had later modified this. Last of all came God in the form of a higher level with a chapel on the back point. The concrete was very modern, put there as part of a massive effort to conserve the structure, with the idea of showing the original form, but making the modern additions obvious.

It allowed the reconstruction of the various interior levels, but leaves the place feeling entombed. It put me in mind of a Dr Who set, where the Dr and his plucky assistant find the walls of a futuristic alien city, when they are supposed to have time travelled to the Middle Ages. I considered writing the blog post from this point of view, but decided I would make a rubbish plucky assistant, glued to the Drs side, never venturing off on my own to court bizarre peril, and an even worse wimpy Doctor,

“Quick! Allons y back to the Tardis Plucky, it’s currently disguising itself as a black Renault 5.” And so forth.

Scripts to the effect will be considered for publication, though I am afraid to report out adventure consisted of just wandereding round the various dampish rooms, peering over at the giddying views afforded by the terraces and the latrines and making use of the very clean toilets. We encountered an English family with two small boys, a few French people and a German couple. No Daleks, but then they might have struggled with quite so many steps, I don’t buy into that nonsense that they float. I guess if Brexit carries the day we will be the aliens.

This entry was posted in Sightseeing. Bookmark the permalink.