Today was fine, but Lyra still tossed about a bit. Not so fiercely as yesterday, but with the forecast of worse to come. I suggested the beach while it was still fine. John suggested a boat trip to Cadaques, a harbour at the end of this piece of coast we had thought we were walking to on our various hikes. We settled for the boat trip, a useful rekey for our next sail. By the time we found the ticket booth the morning trip had left so we hung around town and had lunch ahead of the three o’clock sailing. Even though we were committed to a boat trip neither of us fancied waiting on our own boat. You may have guessed that I have now become a lady who lunches. We have been won over by the lunchtime fixed price menus here. For under fifteen Euros they offer a choice of three starters, mains and deserts, bread, water and a beverage of choice, wine beer or coffee. Today we found a place with a garden off the main street. It looked idyllic and we sat in the shade of a wisteria close to the back door, trying not to attract the attention of the flies. The food was good, but all was not well in the kitchen. Raised voices or rather voice denoted a Catalan Gordon Ramsey at work. Our waiter dithered about with plates of food he had forgotten where to serve, brought us sparkling water when we asked for still and brought John the wrong starter. We rolled with it. The water was pleasant and John waded through a plate of unwanted chicken wings. Then the water came up full of apologies, brought us John’s broad beans with mint and insisted they were on the house. We shared them and actually they were the best part of the meal. As we finished our main course the kitchen caught fire. Great flames licked towards the window opposite and the room was illuminated in an orange glow, which fortunately subsided. Our waiter did not appear for some time, but seemed none the worse for wear. The chef had gone quiet. We passed over desert, but risked coffees. By the time we paid it was time to head for the stone jetty where the tripper boat picked up.

A rambling queue had formed round a couple of anglers. The boat arrived at full speed heading straight for the middle, obviously from the same school as Captain Nemo II. Instead of a couple of burly chaps in the bows this had two slight girls, who tossed the ropes ashore and inveigle the waiting public to loop them onto the metal bollards. Everyone just stood looking at one another, so John was preparing to step into the breech when one of the fishermen did the honours. They lowered a metal gangplank on the end of a step ladder and we all embarked. Given the wind chill factor we decided to sit inside and put up with the clamour of the engine and the salt sprayed windows. As we set off round the point it became apparent that on our walks we had been skirting beneath some big hotels before we had come to the pretty scattered houses of Canyelles. It also dawned on us that it was as well we had stopped when we did. The footpath petered out after Canyelles Grosses, the coastline much wilder and Cadaques a long way away. On the way there the boat dipped its’ nose into a cavern and one of the girls took a photograph of the two of us. Before we arrived at Cadaques she presented us with a print in a wallet. Even though we were reduced to silhouettes it was not tempting to buy the copy, but she was very understanding. 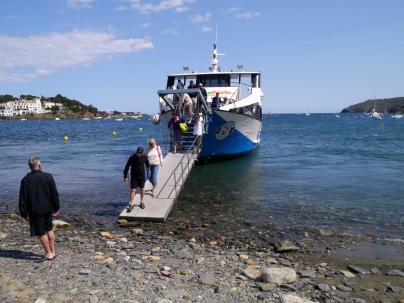 Cadaques lies at the head of a wide bay and boats on moorings and buoys were scattered all around. We were told to brace ourselves and after a couple of futile nosing ins the Captain took a run up the beach. The gangplank just cleared the high water line and we all threaded off for an hour and a half ashore. It is a very pretty spot, full of artists’ studios and artisan galleries. There is a statue to Salvador Dali, who managed to both be born and die nearby. A large pottery built into the cliffs tempted John to buy a sky blue bowl and jug. They had plates depicting the points of the compass, but naming the winds that hark from that direction, eight different named winds, no wonder we are struggling to move on. After an hours exploring we settled down to a beer overlooking the harbour and our ride home sitting on a buoy. At around five twenty he came back in, took his run up and the girls clanged the gangplank down. On we all went. For the journey back they had further entertainment, a competition to win a bottle of Cava by trying to take the longest uninterrupted drink from one of those spouted Spanish flasks. They had a roll of kitchen paper on hand to mop up the competitors, which was just as well as it was a bumpy ride back. We smiled and shook our heads. A young girl opposite us reached a count of twenty four and won the bottle. She and most of the rest of the passengers disembarked at the stop at the far end of Roses from the marina. We had not ventured as far as this as the high rise blocks leading onto the marshland did not look very appealing. The looked positively desolate at close quarters, though they are more attractive at night when they are lit up. It was a relief not to be the only passengers wanting to be dropped off in the middle of the harbour. Finally we approached our stop. With no helpful fishermen or prospective customers to catch the ropes one of the girls lowered the gangplank part way as the other ran down it and leapt for the rocky shore, where she took the ropes and her friend lowered the plank the rest of the way for us to use. Not sure they take part in many risk assessments here. Anyway it was a good trip and we know just how far it is to the point and I am very glad John is waiting for a decent weather window to set off.