Enthused by our first walk we were up early to venture further. As it was Saturday we headed up to the Fort again. It was still shut. We should have read the notice more carefully; it is only open from ten on Sunday on Saturday they start at three. Undeterred we set off along the footpath round the coast. It was familiar territory now and we soon reached Canyaelles. This time we made it past the restaurant on the beach skirted another that hung above the footpath around the corner and made it into the next bay. 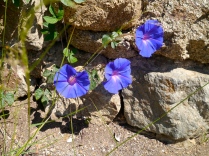 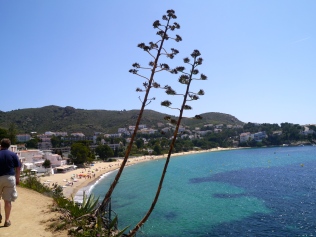 This is called Grande Canyelles Grosses, though it is smaller and much less developed than Canyelles. We sat for a while looking out over it all before walking down onto the beach. Along the front was a large restaurant connected to some beachfront apartments with cerise bougainvilleas romping up the balconies. In the center of the bay was another restaurant fronted by a series of low round tables under thatched parasols. Needles to say we ventured no further. 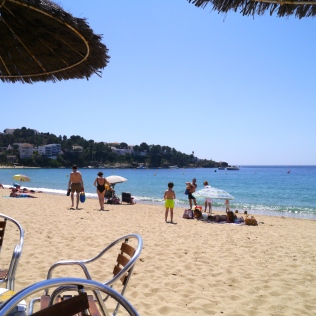 As we sipped our beers John Google translated the menu. Most of the daily specials involved a particular fish, Corvina, which was described as having firm white flesh. When it came to lunchtime we decided to share the fresh fried fish and a goat’s cheese salad. The salad came first, served artistically in a curled red lettuce leaf, the cheese encrusted with toasted hazelnuts. Then came the platter of fish and seafood. Surprisingly the fish turned out to be a fearsome looking shark like creature presented curled round on itself clutching its own tail with spiky teeth. It was not something I would have picked from the fishmonger’s slab. There was one each. Once the head and tail came off, helpfully as one unit, it seemed less formidable and turned out to taste very good. I hope we don’t come across their relatives swimming. I hope to do some swimming soon, the beaches are perfect, but John keeps muttering about cold water and preferring to look at the beach from the bar.

This entry was posted in Food, Sightseeing. Bookmark the permalink.