The following morning the weather had settled down and we motored through the busy narrow gap between Ibiza and Esplalmador, with what seemed like every ferry that travelled the route coming towards us as we did so. We passed Ibiza Town and where plane after plane flew in past the fort on the hill. We were heading for Santa Eulalia, where John had negotiated a berth inside the marina, but on the way hoped to make a lunch stop at Cala Llonga.

We had stayed in beachfront apartments at Cala Llonga with my parents and brother for a week in October the year before I had Emma. At that time there were three hotels, one either side of the bay and one up the hill further inland, our small block of apartments, a grocery shop, two bars and a small restaurant up an unlit road out of town. The meeting of three roads in the center of town was turned into a roundabout by dint of embedding a faded plastic beer crate, at the union. This also served as the bus station. It was a glorious holiday full of sunshine and happiness mainly spent on the long golden beach either laid out in front of the string of turquoise umbrellas or swimming in the cold clear water looking down through a mask at the riot of fish below. Occasionally I would gasp and splutter at the sight of a large white creature looming into view fathoms beneath me, only to realise it was my brother Dave, pointing at something on the sea bed, prodding it into animation if I failed to see it. After one singular failure on my part he erupted to the surface with a small, brown octopus twining round his hand, roared with laugher at my reaction before diving to put the creature back. One day Dave, John and I hired a pedallo and ventured far out beyond the headlands, where the water was too deep and blue to look into, the umbrellas tiny in our wake and the noise of the beach fading to nothing in the sound of the sea. Now there we were in Lyra slipping between the same steep headlands, with a sprinkling of pedallos heading out to greet us. Time slipped and touched fingers. The bay had not changed much, certainly not when viewed from the water. There was the long row of parasols dipping in the breeze, shiny and turquoise as a Disney princess’s gown marking the line of the long golden beach littered with figures. There on the right were the Del Mar apartments with the rickety wooden jetty threading out in front for the passenger ferries to dock. A new swish looking hotel had appeared on the left and a few more villas climbed the steep sides of the bay, but the scene was much as I remembered it. We anchored behind another yacht and swam from the stern. The water was still cold, but we were too deep to see the fish. 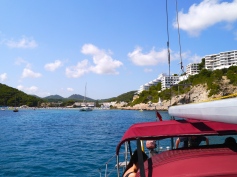 After our swim as we ate lunch on the deck Johnsey asked if we had imagined then coming back in our own boat. The answer was no. The yachts out at anchor would have seemed as alien as spacecraft, we had no thought then of ever owning a boat. We hoped for a baby and failing that planned to go walking in South America the following summer. Life has taken us further than we could possibly have imagined. Brimming with nostalgia we weighed anchor and motored on round to Santa Eulalia.

This entry was posted in Beaches, Family. Bookmark the permalink.