Now we are tourists for a few days, so today we headed for the beach. Not the main beach with its hawkers and palm readers, but the smaller one round the headland past Mambo. We packed our towels, a couple of paperbacks and a few euros in a sealable plastic bag, shouldered our mats and were off. Hopeful young folk handed us initialed tickets offering free drinks or discounts at the various sunset bars we passed, not the one that looks like a cave with a door on, we must be too far over the hill for them to waste paper on us. People were sunbathing on the flat rocks above the beach and when we were closer we could see why. The beach itself is not small, but was covered in ranks of empty sunbeds, no one wanted to pay for. Some sun worshippers were filling in the space around the loungers on skewed towels and others lay on a deck area above the beach or on the aforementioned rocks. There were no swimmers. In fairness it did not look terribly inviting, the sea was surging in with troubled ripples and access to the water from the rocks treacherous. After a brief consultation we decided to carry on round the rough coastal footpath to the tiny beach we had seen near the aquarium. 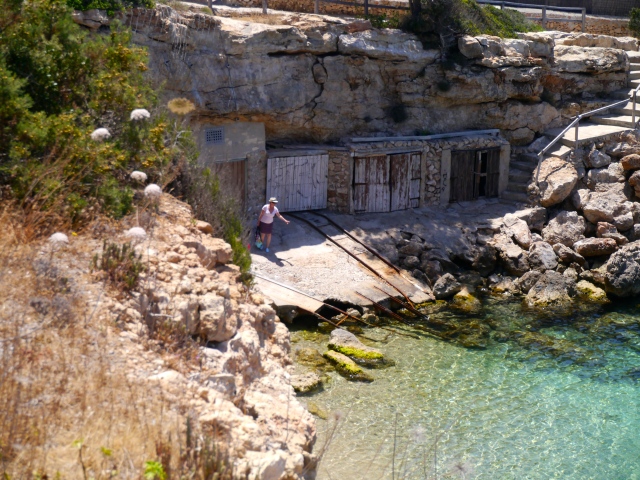 The beach was not as far as we remembered, but was just as lovely. We clambered down the steps at the side, skirted the men sat outside their cave with doors on and headed to the far corner to lay our mats out along the shaded edge. The cave seemed to be an old boathouse as there were metal tracks running from it into the sea. The wooden doors were propped open and three men sat on fold up chairs in the entrance chatting. They could have been surveying their allotments rather than the sea. Behind them stood a blackened half oil drum on legs, which was clearly a barbecue. In the middle of the little cove a Spanish lady was topping up her tan and after a while a young man came and paddled at the edge of the sea. The sea was much calmer here, protected by the wing of cliff, housing the aquarium. A group of boys arrived and jumped and dived from the opposite cliff, having a great time. Still our paddler was not tempted and climbed past us to sit on the rocks. We sunbathed and read before venturing in for a swim, we assumed the young man on the rocks had been deterred by the sharp stones underwater so kept our shoes on. Swimming in plastic shoes is awkward, but the water was lovely and we enjoyed ourselves. Then one of the old guys stood up and called out to us in Spanish. Neither of us had any idea what he was saying, but John thought he could be warning us about jellyfish. John had suffered a nasty sting in Mallorca one year and was not anxious for a replay, so we let discretion be the better part of valor and waded back out to dry off. By this time there was no shade to be had, so after drying we decided to head back. By this time the three amigos had lit the grill and it was giving off fragrant charcoal scents, but we would have fried waiting for the coals to reach cooking temperature. We eased past and retraced our steps, calling in at Mango for a cold bottle of Alhambra beer. Ah, memories of the Alhambra.

This entry was posted in Beaches and tagged swimming. Bookmark the permalink.