Today the sea was as different again, even though the wind was still blowing between forces three and four. We planned to go round the bottom of the island back to San Antoni, which was a fair distance, so we set off early. Just as Lara’s taxi driver had predicted, the wind was heading us as we travelled clockwise round the island, but we were keen to see a new stretch of coast, so we tacked. And tacked ad nauseum. We had what John classed a perfect sail and what I considered a repetitive trawl back and forth looking at first the horizon and then the same few rocks.

Lyra was bowling along making eight knots, hauled over at a steady forty- degree angle. Out to sea a fishing boat was pottering at two knots in the direction we needed to go. It was at first a pain having to make short tacks to avoid him, but then he overtook us and we could make a long swoop behind him. The GPS forecast it would take us four and a half hours to reach our next waypoint, which was the shortest leg of our journey to San Antoni. We were crossing the entrance to the big harbour of Ibiza Town. This was not a place I wanted to hang around on account of the constant stream of big fast ferries plying in and out from all directions. Also it is just the other side of the gap in the islands, through which every boat wanting a fast passage around the south of Ibiza has to cut. I wanted this stretch quickly behind us before relaxing and enjoying the sail up the south east coastline, with the wind on the beam. John was of the opinion that a fast beat to hand was worth more than the promise of a reach round the corner. After a long beat out towards the open horizon we turned to head back towards the hubbub. I had expected another close encounter with our fisherman, but he had turned and was heading back home. The rumble of thunder, yes thunder, may have put him off. Thunderheads were building over the land and it was becoming quite dark overhead. The GPS recalculated it would take an hour and twenty minutes to reach our waypoint. Quite how it does this is beyond me. The time difference on changing direction is too big to be based on the closest distance between two points, but not big enough to take a route around the entire globe and come back to our waypoint. Either way it was depressing. On we forged, John enthusiastically tweaking the sails to reach maximum performance, me increasingly sullen as we headed towards the storm clouds.

On our next tack John was disappointed we would still fall short of the waypoint. My expectations had never been so high, but my spirits rose when he glumly concluded we would have to pull in the foresail and turn the engine on. Of course as soon as we headed for the gap everybody and their grandmothers was trying to cross it at the same time. A big yacht with black sails insisted on sailing through, cutting everyone else up in the process, knowing we all had to give way to him. Plonker.

Once through the gap the weather as if by magic was completely different. The skies were blue and the wind dropped. Given the lack of wind, we carried on under engine. We would have had to motor anyway to make up time, but I felt a bit bad that I had been so grumpy about the sailing, 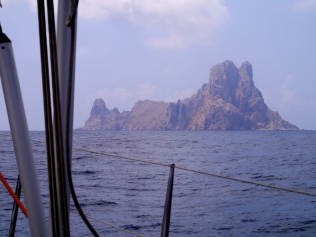 I had not realized there would be no wind on this side of the island. It did not seem to take long at all till we were approaching Vedra. The Bali Hai island looked much lumpier and less alluring from the south, clearly not its’ best side. As we rounded it I kept an eye out for the Captain Nemo II, as by now it was mid afternoon, time the catamaran was underway, trailing the Ritz eating seagull. There was no sign of Nemo either on the water or the AIS screen, maybe they were dallying in the grotto or up close to one of the beaches. Now we were covering territory made familiar by our boat trip, but Lyra has too big a keel for the shallower passage between the rocks, so our course took the long way round and into San Antoni Bay. It looked welcomingly familiar, freckled with wind surfers and sailing dinghies, the two big kites of the Parasenders sailing the sky. A few yachts were anchored behind the shelterbelt of the rocks and a couple more were heading in at the same time. We were a bit nervous about catching a Para-sender on the mast, but the speedboats trawling them wove out past us without an upward glance.

This time there was only one marinera out to meet us and he could not decide where he wanted us to go, rifling through his paperwork and calling across asking us the name of the boat. John feels we should have the name put on the boom to make it easier for them. Finally he beckoned us round onto an inside berth, just as three charter boats were arriving and milling about waiting to be told where to go. John threaded his way through them and reversed in, we danced the stern to mooring polka with one another and are now set for the next couple of days. At this time of year they would only accept a booking of two nights or more. We headed off to the bar, where the waiter remembered us, which was nice if slightly worrying.

This entry was posted in Sailing and tagged boat trip, sailing, San Antoni. Bookmark the permalink.