One of the attractions of San Antoni is an aquarium in a sea cave. Boat trips set off there from the main harbour, but it is only a short walk round the headland from the marina here, so we set off on foot. We headed directly up across the headland winding our way through streets with cafes and beach shops. We came out of town into scrubland and followed a path down to the shore, picking up a reassuring sign for the aquarium. A little further along the road ran out, but there was an even bigger sign advertising the fact that the aquarium was there, it had a bar but it had no toilet. Good job I went twice before we set out. As we wound along the dirt track we skirted an idyllic small beach, with what looked like boat houses, with wooden doors set into caves in the rocks behind. The entrance to the aquarium itself was also most picturesque. The bar area hung limpet like onto the cliff face with a wooden jetty thrust like a stage over the water. The water taxi was tied up to it, but left as we arrived. This was a great stroke of luck as we had the aquarium virtually to ourselves with just a few other fellow walkers. 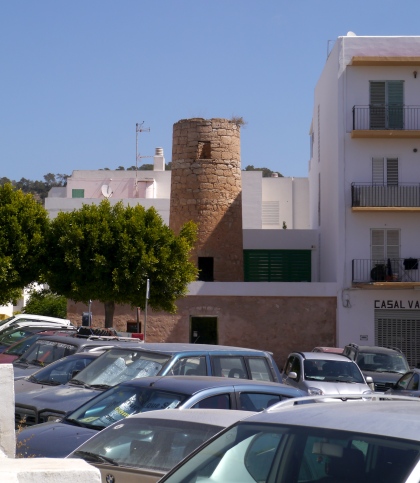 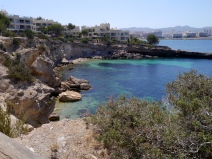 Looking back to Sant Antoni 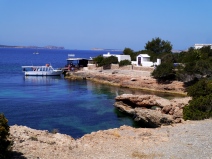 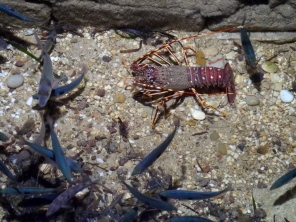 Aquarium from the back 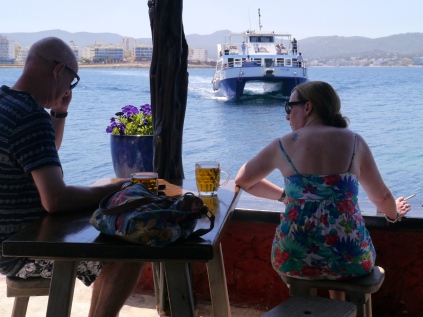 Tickets were sold behind the bar, the barman handed me a leaflet and gestured us to go into the cave mouth alongside. Part of the entrance fee money is used to conserve sea turtles. Inside the cave we had to bend nearly double to walk through the first few yards. We were walking on a deck above a shallow saltwater pond, on which natural light shone down from rough holes in the ceiling. Large fish threaded about below us, some very strange and ugly indeed. There were bottom dwelling fish warty and bug eyed, hard to distinguish from the stones around which swept assorted grey fish and three small black sharks. Seawater could come in and out through grates in the side, through which the fish were too big to squeeze, though one red starfish was having a good go. Once past the mouth we could straighten up, which was a relief. Another walkway led off at right angles bridging another pool in which lived bass, loach and some mutant fish with such large side fins I thought at first they were parasites. At the back of the cave was an area where seals once took their ease in the shade. Now it was home to a couple of big fish tanks home to some smaller specimens, including a row of little mermaid’s purse, strung like washing on a piece of fishing line. There were hoardings with printed information in four languages explaining the plight of the sea turtles and more worryingly of the seaweed. Apparently the native posidenia weed is a veritable rainforest in that it supports a myriad species essential to the ecosystem of the islands. It is under threat from another invasive weed, probably brought in by boats and from the activities of people. People like us, who drop anchors into the seabed and yank the weed up with them or those who scoop up the sea floor fishing for scallops and such. The Spanish are tackling the problem by designated areas where such activities are forbidden, providing licensed buoys for yachtsmen to use, so we can still visit and enjoy these places. The Columbretes is an example. Personally I would much rather catch a buoy than drop the anchor and would be happy to pay for the privilege.

Given the whole cave was effectively an ocean washed fish tank you can imagine the air inside palls after a while, so we made our way back to the entrance and were fortunate enough to find a free table in the bar. Remembering the notice about the lack of toilet, we contented ourselves with small beers. They came in dinky barrel glasses. As we sat drinking them a huge motor catamaran Captain Nemo II came thundering towards the bar, spume flying from its’ twin bow waves. We were beginning to think the Captain Nemo I may have gone down with all hands after colliding with a beach bar when, at the last minute, it slammed on the reverse and two guys jumped off with massive hawsers and tethered it to the shore. They deployed the gangplank and nigh on a hundred assorted tourists disembarked and threaded into the aquarium chattering. They must have outnumbered the fish three to one. We thanked our lucky stars our visit had been between boats. Needless to say they were not in there long and then were straight back up the gangplank and thundering off to their next port of call. The silence afterwards was exquisite, but brief. A small child began to fret and wail, it sounded tired and we dreaded had reached the stage of knowing it was unhappy, but being unable to remember why. Nothing her mum or grandma offered would appease her. The barman came to the rescue with a slice of bread. He stood on the wooden platform overhanging the sea tossing chunks to the free fish, which swarmed till the water roiled. When he had finished he headed back to the bar and the wail started up again, to be silenced at a stroke when our hero returned with another slice, which he offered to the child. She tottered with her mum to the platform, shrugging off any attempt to hold onto her, but finally being persuaded to sit to throw her bread in a crumb at a time. They made a peaceful picture as we left, returning by walking along the rocky headland.