Lara has joined us for the next week, so we spent Friday scrubbing up ready for her arrival in the early hours of Saturday morning. We went to bed with an alarm set for three a.m. Before it went off John’s phone blinged with an urgent message about miss sold payment protection insurance, so we were up in good time to receive the next text announcing Lara being on her way in a taxi. Fifteen minutes later we wandered out along the marina to meet her at the barrier and were passed by a taxi heading for our pontoon. Lara! 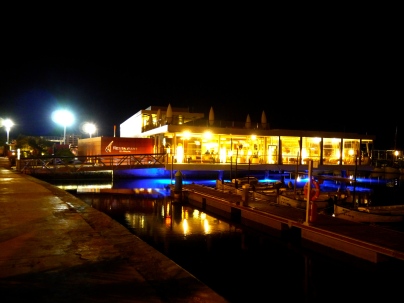 We turned around and walked back up to where she was climbing out and we all smiled and waved at her taxi driver. Turns out he was a sailor himself, spoke fluent English and they had spent the journey deep in conversation. It was the driver who had spotted us on our three am stroll and said, “I think that’s your Dad.” He advised going anti clockwise round the island to avoid having to tack so much. This was John’s ideal plan but in the event the wind was forecast to be from the south so we had to go the other way to be sure of shelter and did indeed have to keep tacking.

We stayed the weekend in San Antoni to show Lara round. The first day we did not show her much, it was more of a restaurant tour between naps. After our late night, we all slept in. As soon as Lara was ready we took her to Mambo for brunch. 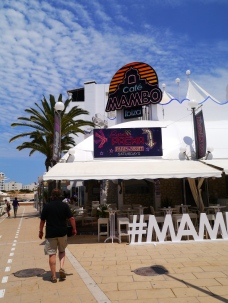 Mambo has a water edge restaurant overlooking the bay and considers itself famous as a long-standing venue with headlining DJ’s. We had lunched there previously and the waiter reeled off a list of names he assured us our daughter would have heard of. That lunchtime the DJ just seems to stand motionless behind his equipment, looking cool in shades, though the mixes did keep pumping and the atmosphere was very relaxed.  John had cheeseburger with excellent chips and I was very healthy with a beautiful beetroot salad. They served Alhambra beer and we chilled watching the antics of the para-gliders in the bay and resolved to bring Lara, to impress her with how cool we have become. Failing that we felt pretty sure Lara would approve of the food, so we made it our first port of call. This time John had a chicken burger, Lara nachos and I a goats’ cheese and quinoa salad, all were fresh and very good. Us girls may have pinched a few chips. After lunch we accepted a complimentary glass of Cava before setting off on a wander round to show Lara the town and the beachfront. We did not go very far along the main beach before Cava induced sleepiness took over and it was time to head back for a siesta.

After our hectic day we dined at The Curry Club, an Indian restaurant set in a small jungle, between two blocks of tall buildings. Despite the many signs it had taken us a few false starts to find, wandering about derelict apartment blocks and tacky bars, sadly aimed at drunken British lads. Once discovered it turned out The Curry Club was actually just a short walk up from the marina, behind the chandlers and was another place we had earmarked for a return visit. It is like stepping into another world, sitting outside under a gnarled tree by a fountain, eating delicious curries with all the ancillary trimmings, all washed down with bottles of chilled Cobra beer. As night falls the coloured fairy lights come up and the waiters light candles in the lanterns. The music is gentle, not to compete with the sound of running water from the fountains and the waiters whisk round quietly murmuring orders into headsets. Our second visit lived up to the first and we plan to come again in the autumn with the rest of the crew.

In one sense it had been a very full day.

This entry was posted in Food and tagged food, San Antoni, sight seeing. Bookmark the permalink.