Today we set off on the bus across the island to have a look at Ibiza town, check out the marinas there and explore the old town. At the bus station a world weary lady would only sell us a one way ticket. We could pay on the bus on our way back. The fact John could only muster a fifty-euro note did nothing for her joy de vivre. Clutching our flimsy ticket we joined a jabbering queue of older Spaniards, who all seemed to be together. On the hour our driver arrived, greeted us and we all filed on, the Spanish people filled up the front seats and we were on a higher level towards the back. We wove through the back of town, picking up odd people at stops en route, who duly filed through to sit behind us. Then were out into the countryside. There were no further stops till we passed through a small town of brilliant white houses and a large church, where we picked up three languid Rastafarians and a young English couple. The road was a major one, but the jolting of the bus made me wish I had taken a seasickness tablet. We passed what looked like circus fortresses perched on hills, with names like Privilege and Amnesia emblazoned on top of their ramparts. We were clearly heading into the heart of electro thump. We hit the outskirts of Ibiza town and several people disembarked at various stops. Then we pulled up on another seemingly ordinary street and the driver exhorted the Spanish party to leave. There was a lot of questioning and people to-ing and fro-ing, they got off, some of them climbed back on, others shouted questions up to the driver through the front window. The driver kept calling out in Spanish. John and I were not sure whether we were supposed to get off or if he was just answering questions. Finally we decided to chance it and disembarked and the remaining people still on board followed suit. As John forged a way through them the Spanish party were still holding discussions with our driver.

We walked on in the direction the bus had been heading and came into the top of a large square, shade by trees and dotted with monuments. At the other end of the square we found a tourist information office in a large wooden cabin. They furnished us with a map and John was prescient in asking them to mark the location of the return bus stop on it. We headed out of the square to the harbourside. All the marinas there looked rammed with craft. There was a fair amount of building work going on and some big ferries coming in and out, so all in all it did not look too enticing a place to spend the night. After a coffee looking out over it all we set off following our map looking for a villa, the name of which John kept saying, but I could not catch. He had carried out his customary research and seemed keen to find it, so I gave up asking. We headed off to the old town looking for his elusive villa. There was an impressive town wall and the buildings ranged steeply up hill inside it, culminating in a cathedral tower. John was not happy about the lack of signage, but we headed up a vast ramp, through a huge doorway in the city wall. Inside a girl in bright clothes was singing. We turned into the narrow streets and started to climb. At this point John realized that the Dalt Vila he had been looking for was the Old Town, which we were in. We had a chuckle about this and then decided to head to the cathedral and climbed up and up the picturesque narrow streets till we reached the battlements. There were breathtaking views of the harbour. John did another assessment of the marinas from up on high. They were still full to bursting. Looking round the views out to sea were stunning with rocky islands, turquoise waters and the sweeping trails of speedboats. We had a brief nosey into the Cathedral, pretty and cool and not at all grand with its whitewashed interior and stained glass. Then we explored a few alleys. For an old town a lot of building work was going on. There were workmen manhandling stones, and climbing up alongside us carrying long iron rods. Round one corner a forklift truck was bravely juddering up a steep incline trying to lever some stonework into place. In a few years some of the old town may not be quite so old. At the very top we came to an extremely derelict palace, which was for sale, some renovation needed, serious offers only. 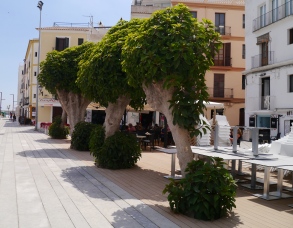 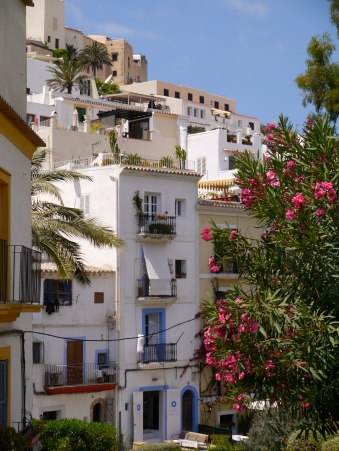 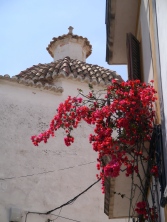 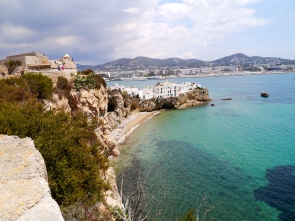 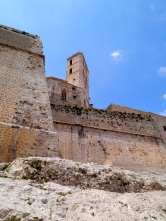 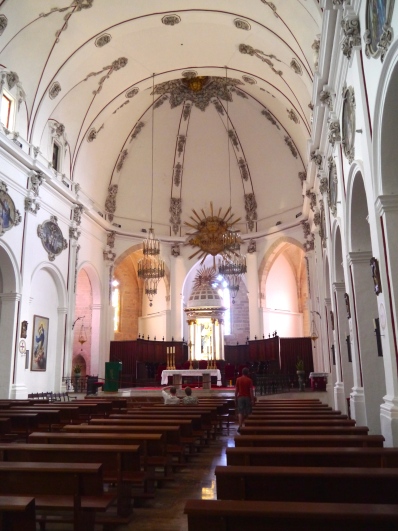 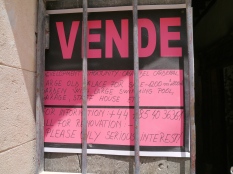 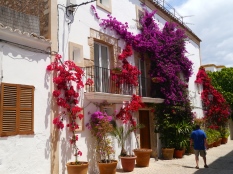 Looking across the Old Town

On our way back down we came into a pleasant square, virtually a balcony with a panoramic view, where several cafes spread their tables under the shade of the trees. The doorways were adorned with ice buckets full of citrus fruit and brilliantly coloured geraniums. We sat in one and ordered the fresh lemonade and then had lunch, sharing a salad and a plate of Serrano ham and Manchego cheese. It was pleasant, but rather overpriced. As we had finished and were waiting to pay a couple of youths with a saxophone and a keyboard set up shop to play for the captive audience. They were terrible. The keyboard player seemed to be out of key and then the saxophonist did not join him, but also chartered a wayward course. Fortunately our bill came before we were appealed to appreciate them. We left the square and set off down the hill, followed a narrow path past nice shops, which then began to lead uphill. We followed this through several swifts and turns to eventually emerge to the sound of slightly familiar off key music. At hasty retreated ensued and we headed back down to ground level, out of the door and over a real drawbridge, we had missed noticing on the way up, back into the harbour. On our way into the main square we passed an obelisk, a monument set up in tribute to pirates. Our guide booklet claimed this was the only homage to pirates in the world apart from a memorial to Drake put up by the British. There is obviously still a bit of sensitivity to Drake here.

Restaurants up on high 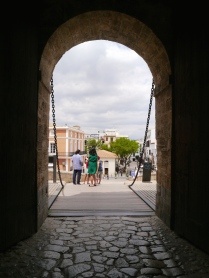 We tried to retrace our steps out of the square towards the San Antoni bus stop and had a stroke of luck, when John spotted our bus turning a corner and we tailed it to the stop and then only had to sit on it a few minutes before we were off back to San Antoni. Our trip to Ibiza Town had been most enjoyable, but we are not tempted to try the marinas there.

This entry was posted in Sightseeing. Bookmark the permalink.