We are still in Plymouth. We resumed our travels early on Wednesday 8th, keen to reach Falmouth before the worst of the weather. We planned to hug the coast this time. I felt a bit off. By the time we reached the breakwater I was feeling very off, and not from sea sickness. I retired to my cabin with food poisoning, one of those grim experiences when the toilet became my best friend for the day. Between bouts of sickness I lay on our bed and the room tossed and plunged wildly. This did not make me feel any worse, but I kept hoping John was strapped on up top. I confess I did not spare a thought for Graham. After a while the motion eased, perhaps we had rounded the headland and were in quieter waters nearer the land. Then I heard voices and the squeak of fenders and concluded we had turned back. The bad weather had arrived sooner than we had hoped and the remaining fit crew had made the sensible decision to turn back. I could hear them up above sorting the ropes out and John came and brought me water and dosed me with dioralyte, which was as grim as I remembered. I longed for Lucozade, the yellow glow of the bottle on the chest of drawers was always a beacon through my childhood illnesses, before the days of e-numbers and hyperactivity discredited it. I did not feel in much danger of suffering from hyperactivity. John was very thoughtful and took Graham out to eat, they spent the evening with the Old Gaffers listening to sea shanties and he brought me back a bottle of fizzy water, which actually hit the spot. Lucozade Placebo! 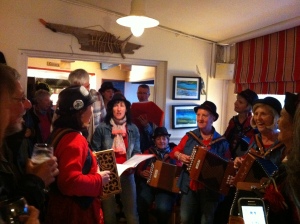 The weather unfortunately continued rough. We hung around the dock all Thursday, with me sleeping most of the day. That evening John cooked pasta and then we went to the bar where eighteen French accordionists were due to perform. When we arrived they were already vamping away to a packed bar. We squeezed in through their enthusiastic entourage, who kept breaking out into shuffling, huddled dances while singing along in French. The finale as far as we were concerned was the arrival of two pipers ,who played as the rest of the company danced round the bar holding hands in a sort of chasseying congo line.

Next day Graham had to head back home for a wedding. I think he was frustrated at not having taken us all the way to Falmouth, but we feel we have gained a lot from our experiences with him.We hope to take advantage of a weather window and finish the passage on our own before he rejoins us for the Biscay crossing. Of course we wish we were there with a weekend with Emma and Johnsey ahead of us. We did have the compensation of a lovely evening with John’s niece Annie and her boyfriend Rich. Annie is here in Plymouth working as a junior doctor in A and E. Rich is an Olympic class sailor, who noticed more about our rig in a few moments than I have noticed in months. They took us to the River Cottage restaurant for an excellent meal in a smart, but relaxed setting. In fact it is housed in the buildings we have been looking at across the water. We had no idea it was so nice over there. We were both touched that Annie and Rich made time to spend with us and really enjoyed their company. It has been lovely for John to introduce some of his family to Lyra. I miss being able to do the same with mine, but he has probably felt similar regrets over many other things living up North all these years.

Saturday was another windy day. We walked into town and up onto the Hoe, where we rode the Ferris wheel. I do like Ferris wheels, they are my one bit of dare-devilry. The views over town were excellent, though we did sway a bit at the top. Then we watched the cup final, with it’s fairy tale ending on the little portable on the boat. We still cannot decide whether to head off early tomorrow or not.

This entry was posted in Friends and tagged Annie and Rich, bad weather, Plymouth, Sickness. Bookmark the permalink.