After consulting the weather forecast, which predicted dire conditions on Thursday, Graham recommended we put in a long day and go straight to Plymouth. This would leave us with just a short journey to Falmouth before the weather broke, arriving Falmouth a day early. Consequently we made an early start, aiming to be off Portland Bill when the tide turned our way.

The Old Gaffer behind us had come to the same conclusion and had already set off, we were to catch up with him just outside the harbour, looking very pretty setting his sails. He elected to follow the inner race, as had been recommended by the harbourmaster. The notion of being swept along to come out the other side”… like a cork from a bottle” did not appeal. I had visions of Bogart and Hepburn clinging to the African Queen. Graham felt with our engine power we would be fine going the long way round, particularly given where we were going. So off we set for a long days motor and this time panoramic views – of sky and sea. 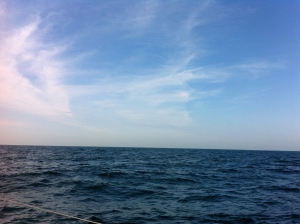 Cirrus clouds heralding the approach of the cold front, but we were travelling through slick seas with what little wind there was right on our nose. Towards afternoon the sea stirred itself and Graham suggested we put out some mainsail to stabilise the boat. This had a miraculous effect and we  had a very civilised picnic lunch.

As the wind came up we put out some jib to balance up the boat, then, as we turned for Plymouth the wind was directly behind, so we rolled away the main and gradually unfurled the jib, to help pull us along. All with the engine still throbbing. We arrived in Plymouth at around six and had a moment of drama, just inside the breakwater, when the jib would not furl. Graham went forward, wrestled it into submission and lashed it down, while John kept us head to wind. Then we puttered through Plymouth Sound to Mayflower marina and a berth right at the front of the pontoon. The men from the harbour office waiting to catch our ropes were a most welcome sight and John was complimented on his driving. The quiet after turning the engine off came as a relief.

We had a cup of tea, freshened up and in no time at all it was nearing eight and we headed off to the marina bistro for our evening meal. At a table across the room a party from the Old Gaffers rally, resplendent in blue jumpers and red neckerchiefs were also settling in for the night. As we ate our meal more Gaffers arrived, pulled up first chairs and then tables until an organic pier had crept across the room towards us. They were not due to meet till tomorrow, but like us, had arrived ahead of the weather and were clearly happy to meet up with old friends. Eventually we spotted our neighbours from the previous evening arrive looking tired, but soon revived by the company. There was a great buzz of chatter and the promise of singing later, but we had had an early start and were due another tomorrow, so left them to it. No doubt our table was then absorbed into the collective.

This entry was posted in Sailing and tagged food, Old Gaffers. Bookmark the permalink.