Breakfast Ashore and off to Ischia

Posted on October 7, 2017 by cathyharnett

We arrived at the café hungry for our pastries, sidled past a man collecting to send himself to Africa as a missionary and put our sunglasses on a table close to the interior. We both went inside to scan the display of food before returning to our table. Even though it was early there was a table of four young people already seated on our left. These looked slightly older than yesterday’s lot and all sported A5 sketchbooks. The young man sat drawing in his, but the girls just waved theirs around a bit before concentrating on their phones. The waiter brought them coffee and orange juice and then came to take our order. I went back inside with him to do the pointing and we sat enjoying custard filled Danish as a few more artists arrived to sit to our right. They reminded me of Katie’s first illustration assignment to sit sketching in cafes and felt it was an easier prospect here, where a cup of coffee rents you a table for an indeterminate length of time. Our time however was limited and we headed back to Lyra and set out to island hop. 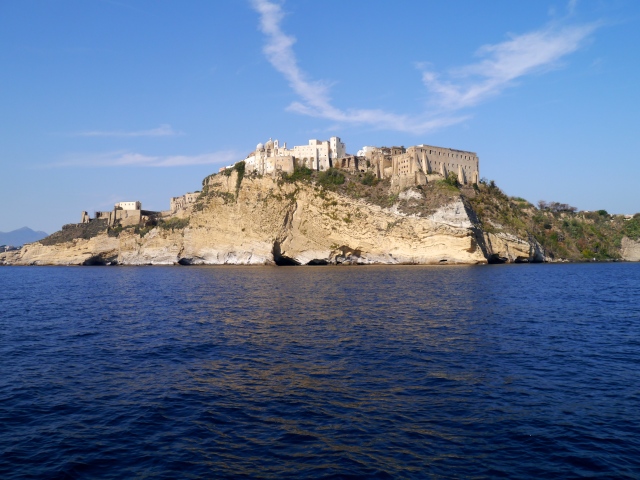 There was no wind, so we took the short passage along the south east coast of Procida to Casamiccola. On our way we had a view of Cala di Corricella from the sea. We took a turn around most of the island, cutting up the channel to dodge the ferry traffic, that heads along the island tops bound for Porto d’ Ischia or Cassamiccola and managed to pull into the harbour without a close encounter of the unpleasant kind. John had been unable to raise anyone on the phone to make a booking, so we loitered anxiously, while he called up on the radio. There was plenty of space in the harbour, but we were concerned the marineras had headed off to an early lunch and we would have to fend for ourselves. The prospect of having to jump ashore from the stern was not an enticing one and I mentally rehearsed what I thought I should do in what order and came to the conclusion there were a number of ways things could go badly wrong. It was a relief to see a white haired chap waving to us from the second pier, even though the space he had for us was not obvious until we had committed to the turn. We nestled in between two boats and John tied on the lazy line only to discover it actually belonged to our neighbour to port. The marinera found us another line, but the angle on this meant Lyra lay slightly skewed in the berth, despite the fact John had the line drum tight. All the surrounding boats had a similar tilt, so possibly something has moved since the lines were laid. The turning of the large ferries at the end of the pier may have had something to do with this. John headed off to pay, but came back a short time later with the news that this pier belonged to another enterprise and we needed to pay in town. Apparently we had been phoning a different marina than the one we had stayed with last time, so they had done the poaching when we arrived, so it was probably fair enough. John said he wished we were back on the other pontoon and when I set out along it and felt it give a Tacoma Narrows sashay I realised why. When the ferries come in Lyra moves less than anything here, including the pontoon. At least we are nearer the hotel where we used to stop for coffee and drinks. The waiter there was very pleased to see us again and we had lunch out as well as breakfast, a virtuous chicken salad and a naughty glass of white wine.

After lunch we had a wander round. There had been an earthquake centred on Casamiccola since we last stayed here and we had been concerned things may have changed, so it was reassuring to see all the sea front looking exactly the same. One of the buildings off the square had metal rods supporting some of its’ archways and there was a van full of rubble parked before one of the long passages leading off the front, from which came the sound of drills and shovelling. The shops along the front were exactly as we remembered, the wine seller, the mini-markets, the bakery and the more tourist focussed bars, gelateries and souvenir shops were all untouched, but further back the restaurant with the yellow walls was shrouded in scaffolding.

Undeterred by our gastronomic excesses of the day so far we walked into the neighbouring little seaside town of Lacco Ameno for dinner. It is a pleasant walk along the coast and the town is more of a tourist trap with its’ variety of shops and restaurants. The posher clothes shops all had fur coats and quilted jackets on display. We had dinner on a terrace above the harbour listening to the swish of the sea rattle the pebbles of the beach below. I must try to make pasta with ham and blond beans; it has a surprising taste of home.

This entry was posted in Sailing, Uncategorized and tagged Breakfast, Casamiccola, Lacco Ameno. Bookmark the permalink.

1 Response to Breakfast Ashore and off to Ischia