Lara was keen to visit the Blue Grotto and John resigned to going along too. We planned to save this for the second day and set out early, but when John checked the forecast for tomorrow there was talk of cloud and rain. Today the sun was blazing so we changed tack and set out for the smaller trip boats.

We were waylaid by a young man with a facility for speech. He showed us his boat and announced he was local and an excellent sailor, he could give us a tour of the island ending in the Blue Grotto, which cost extra and he personally thought was overrated. He would go this way round so we could see the Faraglioni rocks in the beautiful light. There were other excellent sailors who would be able to give us the same tour, but they did not speak such good English as he did and so would not be able to tell us about the island so well. John asked how much and the price was less than John’s online research had suggested for a private tour. As the harbour was already busy I could imagine reaching the Blue Grotto and John not wanting to hang around waiting to go in. I explained we had set out early to see the Blue Grotto. We could go that way round the island if the Senora wanted. 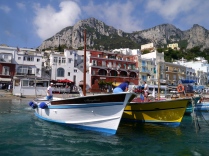 So off we set and he was good as his word. He did not talk all the time, but he pointed things out as we went round and filled us in on bits of history. At the Grotto he called out to the boatmen and persuaded one to pull over and take us in with hardly any waiting around in the melee of small rowboats. Our man was an old hand who seemed to cut the lines without anyone questioning him. We all had to lay in the boat as our he hauled us through the low archway on a chain. Inside the electric blue looking back at the entrance was uncanny. It was also bedlam with boats churning past each other in the gloom and various boatmen, including our own bursting into snatches of song. I thought about my Mum and took some video in the hope that it will give a flavour of the experience.

Then we were back out into the sunlight, back into our tour boat and off to the Green Grotto, and archway formed of green rock. This way round we ended with the Faraglioni and the famous view of them and we went through the arch in the center. All in all it was an excellent start to our day 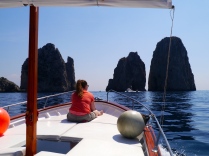 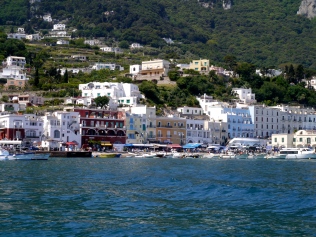 We took the funicular railway up into Capri town and visited the tourist information, the girl there circled a garden and a monastery as places of interest. First we had a wander round the little streets. There were lots of designer shops, expensively empty, a luscious pastry shop and gelateries piled high with coloured creamy clouds.

Down one alley we were caught by a restaurant proprietor and lured into his pizzaria on the promise of a roof terrace. This turned out to overlook air conditioning ducts of the next rooftop, but it was quiet and the food smelled good, so we decided to eat there. Every so often he would arrive with another party, John said the streets acted like a lobster pot for him. The food was good, but Lara thought the mineral water suspect, chateaux Trotter. We ordered the next one with gas and our host cast us a look as though we were trying to cheat him. On leaving we walked down a very pretty road built by Krupps to the garden. It was rather open and full of bedding plants and tourists, but did overlook the rocks. We joined the line to take photographs in front of them, Lara instructing us in the ways of Selfies. 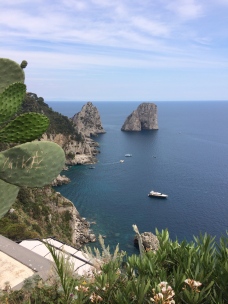 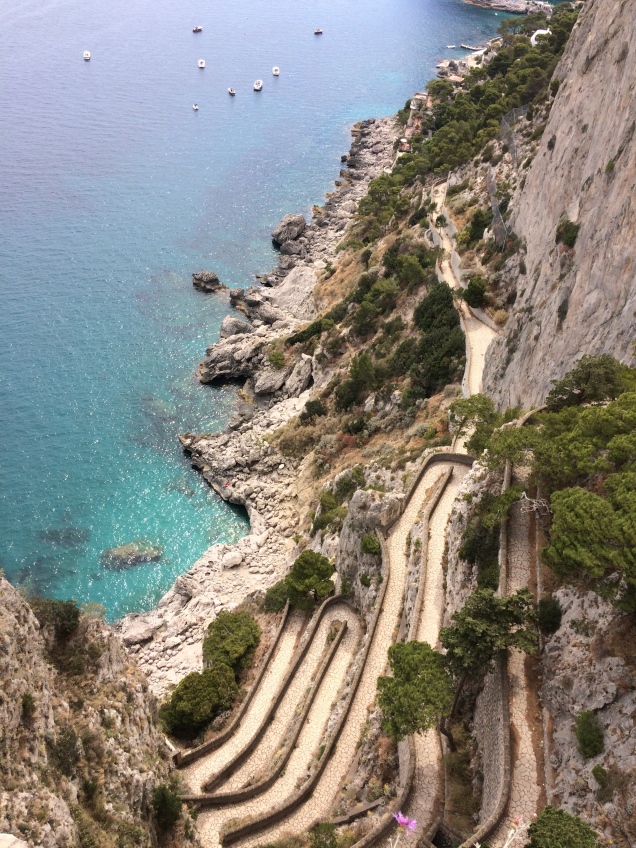 Back along the Krupps way and we parted from the crowds and found the monastery with had much wilder gardens, even better views and was deserted. It was amazing to find such a peaceful place with just us, and the odd lizard. Revitalized by the quiet, we retraced our steps into the center. There was a huge queue for the funicular so we walked back down using a footpath, which took us past lovely gardens of the painted houses. The only part of the Capri we had seen today that was familiar to me had been the rocks.

This entry was posted in Sightseeing and tagged Capri. Bookmark the permalink.

1 Response to Day 1 on Capri