I first came to Elba some over forty years ago and so hoped we would be able to stay on this enchanted island. My wish was granted and we had a couple of days, not long enough, but lovely. My memory was of a coach tour looking down through trees at distant beaches and of a narrow fishing harbour with sparkling clear blue water. Down to the harbour ran narrow streets with a charming mix of shops and houses. Outside the shops and at upstairs windows inside the houses sat tiny ancient ladies in long dresses with black head veils, their faces so lined it was hard to read their expressions. I bought a pale pink coral necklace, which I still have from one of the small shops.

Two days ago we motored round the headland into the main port of Porto Ferraio and were given a berth on the curved wall of the stone quay. The water was still crystalline, but none of the structures were at all familiar to me. Perhaps we had visited a different smaller harbour. This one is lovely with large square fronted buildings in subtle tones sweeping round the bay, climbing steeply up hills topped by a series of old forts. Once we were all tied up we headed along the front looking for the port office to register our arrival. It proved deceptively hard to find, which allowed us to explore much of the waterfront and to spot an open topped tour bus. Finally a port official pointed us in the right direction, we found the office on the first floor and paid for two nights. 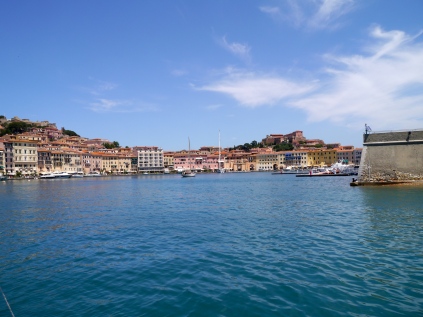 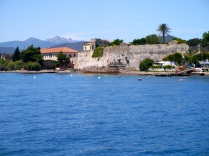 By this time some of the terrific heat had seeped from the day, so we explored the narrow streets and squares behind the front, steadily climbing until we arrived at a building claiming to have housed Napoleon. 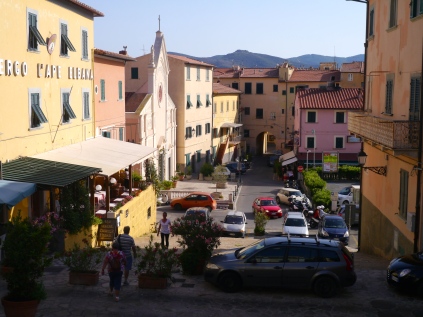 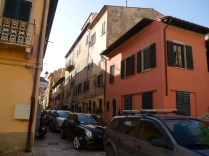 Napoleon was imprisoned on Elba, but after a year escaped to meet his Waterloo. During his time here he set up a civic administration and built roads and is considered to have been good for the island. A couple of places now claim to have housed him. This one looked a bit down at heel. It was only open for another hour, but John reckoned from the look of it an hour would by long enough. We wandered through a series of dusty rooms with faded ceiling facades, painted to look like draped fabric. On music stands in the center of each room notices in Italian, English and German gave facts about the furniture and paintings. There were lots of paintings and busts of Napoleon, but other than saying when they had been made and by whom no reference was made to the life and times of the former Emperor. John voiced the opinion that Napoleon had never clapped eyes on most of this stuff and certainly there was no claim to its having been in situe when he stalked these rooms. The formal gardens outside offered impressive views of the island and across the sea, one could imagine Boney looking out and plotting his escape. After Napoleon’s house we contoured round and eventually found a set of steps leading back into the town square. That night we ate in one of the restaurants in the square, with the residents watching Italy play on large screens.

Next day we headed to the bus stop and joined the tour to Napoleon’s other house.  The route to Napoleon’s house in the open topped bus offered often intimate contact with the local flora and views down through it onto the beaches, much as I had remembered. 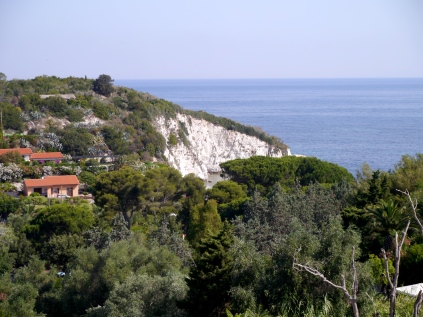 The bus had a live commentary in Italian and English, provided by a tall, blonde woman, who spoke into a microphone between bursts of pre-recorded background music. The soundtrack started with Pavarotti followed by the theme from Gladiator, morphed into reggae and Abba. We pulled over at the last beach for a photo shoot and as we left the music launched into Celido Lindo. All the ladies sat behind us started singing along and it was all very jolly, then came Volari, a tricky upbeat version, which they all knew the Italian words for. We joined in with the chorus and must have made such a good impression that our guide stopped the English part of the commentary. It is also possible that our guide forgot us after the stress of the bus breaking down. This happened after we had edged into a small car park in order to turn around, there was little space, so our hostess opened the door to hang out and give directions to the driver. After this the door would not close and an alarm to make the driver aware of this kept sounding. This put a damper on the singing as we headed off to Napoleon’s house. As they dropped us off in the car park our hostess told us they would be heading back to base to fix the bus, but would be back in an hour to continue the tour. From the car park we headed up through the usual encampment of stalls and bars that gather round a tourist honey pot and headed through large gates and up an impressive driveway to the house. 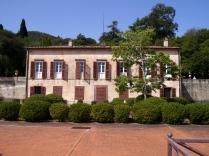 This was much the same as the Napoleon’s house we had already seen, but bigger and with an impressive lower arcade, in which were displayed some old satirical illustrations of Boney being exiled to Elba. The island was depicted as a rocky wasteland populated by gurning gargoyles. If the target audience of these scenes could have witnessed the state in which Napoleon had actually been kept, with his spacious houses decorated with royal eagles and imperial bees, they would have thrown the papers away in disgusted. The sparsely furnished upper rooms were rammed with tours of Italian speakers and the guides had plenty to say for themselves, but as we did not understand a word it was just more of the same faded spaces and dusty furniture. We edged round the tours, accomplished a swift circuit and wandered round the upper deck surveying the grounds, before heading back for a coffee ahead of the bus. From our vantage point in the cafe we saw it arrive and threaded our way back to join the ladies for the rest of the tour.

The music started up, but minus Pavarotti and the “husband to a murdered wife, father to a murdered son”. Soon the sing-a-long was in full spate. We visited a spa, but I have no idea why, stopped in the car park, no one got out, so we headed back to base. There was a different tour in the afternoon to visit a Roman Villa in a small fishing village, for which our tickets were valid. I wondered if it was the place of my memories, but we did not feel we could face a further bus trip and spent the afternoon at leisure.

We spent our last evening in the posh restaurant on the front, which had lovely food, but a rather uneven service, but a stones throw from the boat it hardly mattered. Back on board we had ringside seats for a fabulous guitar performance, which was literally stopping people in their tracks at a bar opposite. We sat with a glass of wine joining in the applause.