Another early start, even though we do not have so far to go today, because the early hours seem to pass quickly. We nosed our way out of the shallow harbour entrance, a feat not made easier by meeting the fishing fleet coming in. It was a still morning, the high crags looked spectacular in our wake. Curiously we never noticed the backdrop when walking around the town, either the mountains are further away than the view from the sea suggests or we were too busy peering in bars for a telly. Once out at sea it became calmer still, so that at one point the sea was glassy and mirror flat. There was no choice but to make way under engine. We passed a boat we had noticed yesterday, which was conducting hydrographic research according to the AIS. There were one or two other boats about making passage and a couple of big cargo ships at anchor. Just after ten we crossed onto the deeper part of the reef outside Leghorn, a strange sensation having the depth gauge suddenly plummet, but we were soon back in deep water and began our approach to Cala de Medici before noon.

This was nowhere near as stressful as yesterday, though typically the wind came up to force three as we rounded the headland. There was a string of little red buoys marking the shallow water by the headland and once inside the marina they were quick to answer the radio and soon came back with a berth number. The radio operator then asked if we would like directions to the pontoon, which is the first time in four years anyone has offered. John said please and our guide was very clear. We were on pontoon G 58, again right on the inside of the marina. As we set off slowly down the ranks of boats two marineras in a tender motored past us, waving that we should follow them. John turned around at the end of G pontoon and reversed down. One marinera was stood on the dock waiting to catch the lines and the other was in the tender ready to give us a nudge if it all started going pear shaped in the wind. As it happened John’s steering was spot on and we did not need a nudge. My throwing also went well which was a big relief as the second marinera stood with the lazy line in his right hand and his left extended like the Fonz, as if to say throw it here. I did so and he caught the line one handed and passed me the lazy line with the other without seeming to move. Faced by this stern master of the Universe I scuttled off down to the front to tie the line on before the wind caught hold of us. John came out and took the line back from him, so then we changed places as he took a second lazy line down the front and I tied off the other stern line. By this time our man was holding out a piece of paper, which I climbed down the back to take from him. He told us we should fill it in and take it to the office with the boat papers. The office would close at one. His companion in the boat had by now drawn up to collect him and said something in Italian. The stern one talked to the office on his radio asking about the hours and then announced they would open again in the morning. At which point he smiled and hopped into the tender. I think they were both off to lunch. We want to be off early tomorrow, so John headed straight over to the office and even though it was only twelve thirty had to dig the girl out to take our money. They have been brilliant here, but it was as well we set out and arrived early, they seem to work a very short day. 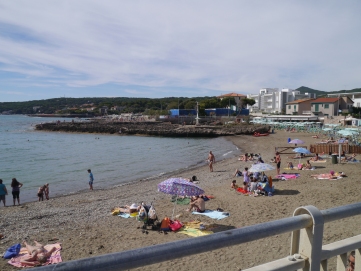 On exploring ashore we found a beach area, an apartment complex and a couple of bars and restaurants. We had a very nice Caesar salad at the Fuxy Bar, which had the most amazing ceiling of hanging light bulbs. Collecting a backpack we then headed further inland to find the town center, but were distracted by finding a huge supermarket close by the marina. This was actually just what we needed and we stocked up on fruit and water. In the evening we tried the restaurant above the other bar at the marina and this truly was gourmet and cost much less than our DIY crudités in Cannes. 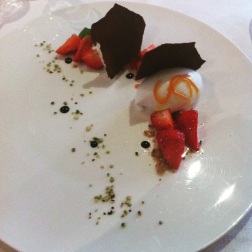