As San Remo is so steep we shouldered our backpacks rather than dragging the trolley and set off to sightsee and food shop. The sightseeing came first with the empty bags. We retraced our steps along the sea front, but then cut up into the town. The streets all around were lined with parked motorcycles, to a degree I have never seen before. In a busy square we found a coffee shop under the stone arches of a grand old building and sat in the cool shade there for a couple of cappuccinos. Italy is coffee heaven. After the coffees I had another memorable toilet experience, a single, normal toilet, but a unisex facility with a smoked glass door. Not a place to linger.

From the square we struck up into the old town. It was very old indeed. We entered under a deep archway low enough to trouble cyclists and the many bikers. At the end of the arch a narrower covered passageway sloped gradually up at right angles. It was an enclosed street only suitable for pedestrians, doorways and shuttered windows could open onto it on both sides, but all was shut up and padlocked. It was dark and rather dank with pools of light entering from other open streets that led from it. We headed along, looking up the side streets for a likely candidate. A man and a boy passed us walking down in the gloom and then a young woman in a hijab. We looked up the street down which she had come. It ran steeply uphill, with sloping brick and pebble steps, a narrow passage between tall buildings, but one at least open to the sky. The view ahead was hidden by serial arching buttresses of masonry, some with rooms on top bridging the street, drab washing hanging from the windows. The way ahead was also obscured by an old woman labouring up, leaning heavily on her stick. She took up the whole width of the street; so we passed on to try the next one only to find there was no next one. Our tunnel ended open roofed, but with a blank wall on all sides. We retraced our steps. Looking up the old woman had vanished, feeding the illusion we had entered a fairytale labyrinth. We set off up the street and it was hard going. Every so often we would pause to catch our breath and gaze around at the warren of buildings. As we climbed it became obvious that even narrower lanes led off at intervals and looking down one of these I saw our old woman, reassuringly real, leaning on her stick chatting to a pair of old men, who were sitting on kitchen chairs in a walled yard. 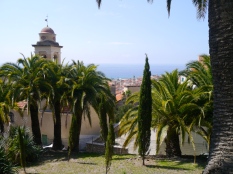 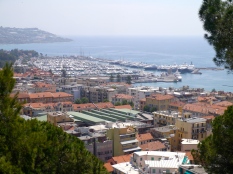 It was one of those hills that promise a summit, only to reveal another just as you reach it. Eventually we came out of the overhanging buildings onto a viewing platform with railings and trees. There were congregated a number of ruddy faced individuals of our own age, panting and determinedly enjoying the view, alongside a smaller number of nonchalant youths, who had come up on their scooters and were casually draping themselves before said view in front of their phones. It was spectacular, a panorama taking in the town and harbour below, the expanse of sea to one side and the shear green mountains to the other. Pretty terracotta buildings and domed church towers hid amongst the trees and roads on soaring concrete viaducts ran in tiers from hill to hill. Unfortunately there was also still an up to look at, with the main church at the top of a wide driveway paved in mosaic cobbles. Having struggled this far we determined to see the church and set off again. Inside it was cool, damp and catholic. Back outside the bell in its’ tower began to strike twelve. A bell of different tone also struck lower down the hill, but out of time in a clanging call and response. We decided to try a different way down and set off to the chimes past painted houses with green shuttered windows decked with tumbling flowers. But all roads led through the labyrinth and we were soon immersed once more in its’ tunneling alleyways. The center of the steps we had to walk down were of smooth brick, but on either side were cobbled pebbles, which I think were designed to give donkeys purchase. The sight of a painted sign reading Restaurant Muleteers, before a terrace on which a row of square tables with cheerful red checked cloths had been set, set me off with this notion. 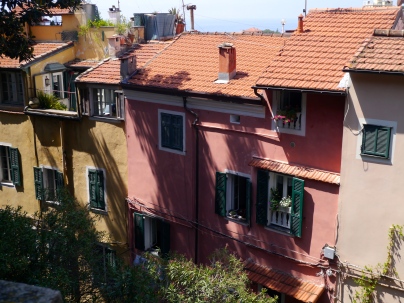 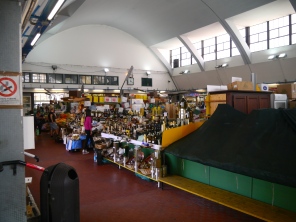 We came out by a large indoor market, so were seamlessly able to go about our shopping from glorious displays of fresh produce and such an abundance of mushrooms as to perfume the air. On our way back we passed through a row of seaside restaurants, stopped for a salad and ended up ordering the pasta of the day, an irresistible tagliatelli with prawns and following it with pannacotta. They brought us bibs to protect us from ourselves when tackling the prawns.

That evening we ate on board and then watched Italy play, first half in the marina bar and second half on our own little telly. I think they were luckier than England.

This entry was posted in Euro 2016, Sightseeing, Uncategorized. Bookmark the permalink.