All Tied Up at the Cap d’Age

The text I should have sent the girls on our arrival was “all tied up at Cap d’Adge,” but spelling has never been my strong suit and we had had another challenging experience docking. Katie immediately responded with the suggestion it should be the title of our memoirs. The “all tied up” was a reference to the cat’s cradle of lines we have woven around Lyra to hold her to the tiny pontoon on which she currently sits. We have been on such small pontoons before, but not since San Vicente and we have often joked that we only ventured there in blissful ignorance at the time. Moreover this particular pontoon is held in place by a length of blue rope, strung from point to stem, a fact we discovered when John undid said rope to clear the way for our stern line. The whole thing slewed sideways until the bulk of Lyra steadied it. John promptly hauled on the rope, brought the pontoon back into place and retied the it. How did we end up in this state? Well.

We started early when the air was still and managed to escape from between the poles by casting off the stern lines and motoring forward slowly so I could use my hook a duck skills to lift the front lines off one at a time. The ropes were surprisingly heavy on the end of the boat hook, but I managed both sides and John steered us out with just the fenders catching one of the poles. It was a tricky piece of maneuvering I would not care to do in a side wind. Looking around, the other poles where boats are tied permanently were well padded to protect the sides of said boats. It is remiss of St Cyprien to put people in such stark berths and to have no cladding on the reception quay, so we would not recommend stopping there. The poles provide a very secure holding, with the added bonus of one not having to drag a mucky lazy line around, but are a bit of a pig for two people to manage alone.

Once out of harbour, the sea was oily smooth and there was very little wind. Above us icy mare’s tails chased across the clear blue sky, but the horizon ahead was lost in haze and the shore shrouded in mist. This is an eerie experience at the top of the windiest part of the Med and we had our fingers crossed it would last as forecast. John put one of his playlists on to break the monotony of the engine noise. The weather is due to break after tomorrow, when some high winds and thunderstorms are forecast. We could not decide whether to stay in the big marina at Cap D’Adge once we arrived or to press on to the huge one at Port Carmargue, so decided to reserve for one night with the possibility of an extension and then think again. In deference to the French lunch hours we aimed to arrive just after two. On arrival the reception quay was much shorter than we had expected from looking in our pilot book. It was a stone dock, like a thrust stage with the reception at the front and the fuel dock along the far side. Against the near side a large orange coastguard vessel was tied between the quay and a large rusty buoy, which stuck out behind it restricting the approach. As we needed fuel we headed for the fuel pumps. John nosed in and I managed to climb off and secure the middle and stern, then an elderly French man came out and secured a line to the second middle cleat, so we had no need to attach the bow line. He smiled at me. John told him how much fuel we needed and he told us the price. We both nodded and our man passed John the nozzle and watched as John filled us up. Gathering my best polite French I asked if we could stay there, while John walked round the corner and booked us in. He was very sweet. He smiled and nodded. He said no; explaining he had to keep the fuel dock clear as boats could come in at any time. Given the marina has almost two thousand berths and the dock would only have taken us and another boat our size we could see his point and smiled and nodded back. He and John disappeared into the office to settle up. I plotted that another time I would keep my mouth shut, let John wander off and go and sit below waiting. Anyway we backed out, round the corner and approached the arrivals dock. This was much smaller than the fuel dock. They probably reason that it doesn’t need to be any bigger, because in spite of the large number of berths there are only twenty allocated to visitors. On the second attempt John managed to come steeply in between the rusty buoy and the end of the quay and turn sharply at the last minute, so I could climb off. In order not to go into the restricted fuel side we had to hang over the back of the quay, blocking in the coastguard vessel. No marinera appeared to offer help. In Spain they always come out even if it’s as soon as you’ve finished. John headed inside with the paperwork and I sorted out the lines and fenders for a stern to mooring, hoping there would be no poles. 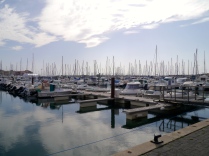 Some time later John came back with a plan of the marina. It was not poles. It would be a pontoon even, but there were no marineras to assist. John had been offered either a berth right outside the reception on one of the pontoons in the harbour mouth or one further in. Thinking of the weather to come John opted for the one further in. The receptionist had circled an area on the map. John had asked which number berth we had been allocated there. The girl had looked puzzled and said she usually just sent people down there and they chose an empty space. We set off, me moving fenders about and John trying to make sense of the map. The marina is so big they run boat trips round it, proudly boasting an eight kilometer round trip. We passed the island of the fishermen and negotiated the entrance into the inner sanctum. We crawled along looking for a berth along one side of the allocated pontoon. I stood at the prow to see better. They were short pontoons of the springboard type that are such a joy to jump down onto. There were three spaces and across each one the boat next door had draped a line, making it impossible for someone to come in alongside. This is naughty, but people do it to make themselves more secure next to an empty space. Usually the marineras ask them to move the line when they want to bring a boat in. Sadly in this huge marina there are apparently no such staff. John could see spaces on the other side, so we backed up and went down this. The pontoons were even smaller, but there was one with a double space so we went for it. It was so small John reversed in or we would not have been able to climb off, as it did not come half way on Lyra. I was crouched to jump when a man came over and offered to take our lines and did a marvelous job of tying them on and passing them back one at a time. I thanked him in French and, as he looked puzzled in English. “You’re welcome” he said to the English with a slightly German accent and hurried on his way before I found him another line to tie. Lyra was slightly skewed in the space, so John tried moving the blue rope and we realized why this pontoon was free. Reluctantly we too took a line across the remaining gap to hold Lyra squarer. In fairness only a jet ski could have fitted in there we are so much wider than the allocated boat width here. Lyra is the most stable thing here making the decision to move on tomorrow a no brainer.

We had our evening meal ashore at a restaurant full of Dutch speakers, La Taverne. The proprietor spoke fluent English, but I think he was either Dutch or German. One of the specialties listed was pig’s cheeks with red cabbage and as it was offered on the set menu that is what I ordered. It came with sliced, fried potatoes and was redolent of Christmas. The ham was worthy of Beaty my grandma’s cooking. I told him this and he seemed very pleased, gave us his card, which boasted home cooking (Kuche wie zu Hause, so German then) and asked us to come again. We regretfully explained that we had to move on. If you manage to tie up in Cap d’Adge I thoroughly recommend it.

This entry was posted in Food, Sailing, Uncategorized. Bookmark the permalink.