Nous sommes en Francais. We crossed over the border at eleven forty five this morning after retracing the route of our boat trip and then turning the corner and heading for St Cyprien. I already feel nostalgic about Spain. We have done most of our sailing in Lyra there and have travelled along much of her coastline. It has been really beautiful from Galicia and the lovely Rias to party going Andaluciathe and hardworking Catalonia. We have enjoyed our forays inland to visit a variety of historic cities. The coastline along the Costas has often surprised us with its’ beauty. The people have almost invariably been friendly, helpful and welcoming. Charming in their efforts to compensate for our lack of Spanish. Now we are going boldly with our school French, picked up sometime last century and in the Captain’s case promptly discarded.

We set off at just after seven and have discovered the purpose of the seven o’clock siren. As we were sat on deck eating our breakfast fruit John noticed the fishing fleet assembling beyond the marina wall. They were circling each other and shuffling like dinghies at the start of a race, ranging themselves against an invisible line in the water till the siren sounded and they were off engines roaring. All shapes and sizes of boat hitting the throttle at the same time, heading purposefully in the same direction bound by to some hitherto unheard of etiquette. John realized what they were up to and we held back so as not to be in the way again. Another Najad was setting off too. We had noticed her further along the sea wall; it is not often we spot another one. We waved to each other as they passed by, to pull up at the fuel dock.

It was a straightforward motor into a weak north wind, paging out the hours. John spotted a couple of sharks close to his side of the boat after we had rounded the point. One gazed back at him with a blank eye. An hour or so later he spotted a fin to starboard, which I also saw. They look nothing like dolphins, no dark undulating back just a single sharp fin cutting the surface, in each case a lone one. John thought they looked about four feet long, not quite jaws then. Low cloud lay draped over the hills and the sea was smooth and glassy. A few other boats were out taking advantage of the weather window to make passage, we could just make them out in the haze ahead and turned on the radar just to be on the safe side until our approach to St Cyprien. 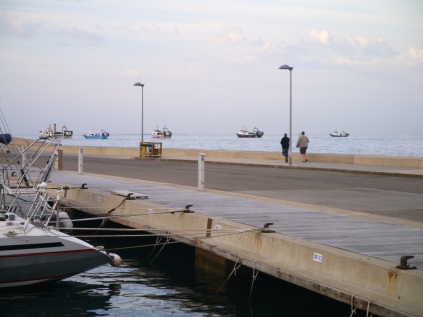 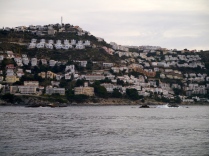 After consulting the pilot book we expected fuel to be on the welcome quay, so I readied the ropes and fenders along the port side. On entering the marina John could not see any fuel pumps, but after casting an eye around decided to just pull up on the welcome quay and sort out the paperwork. The quay is stone, quite rough with not a single fender or tyre along it’s length. We knew French sailors distained putting fenders along their sides, but had not expected the fixed moorings to be similarly denuded. I was in for another even greater shock when John came back after registering. We had been allocated a space, which involved passing between a pair of poles, tying on to both, one on either side and then taking ropes ashore. What was more the marineras would not be available till two, French lunch hour being as long, but earlier than Spanish lunch hour and apparently with no cover at all.

John said we might as well give it a go and unhooked the passerelle so I could more easily jump from the stern. First I had to channel Annie Oakley and lasso the poles with the bow lines. I tied big loops in the end of each line and John insisted I fasten them to the front cleats so the ropes would not fall in the water. He began to reverse and I made ready the stern lines. “Are you ready?” he asked, when clearly I was at the wrong end of the boat. I ran to the front, shouldered one loop and held open the other. Ready. “I think you’ll be better doing it from amidships as we pass through” he called. Fool of a Took, I should have known that the number of times we come into pontoons and I have to work the ropes from the middle. It is the widest bit of the boat and so comes closest to things. I ran the ropes down the side one at a time and of course I had tied them off too short and had to undo them, run down the side with the loop and then back to tie on again. I only managed to retie one before we were there, so I wound the other round the cleat ran down the starboard side with the loop and hoped. My efforts to hook the starboard pole failed miserably, but we were pushed close to the pole to port, so I ran across the deck and dropped that one on. Back on the starboard John had come to help, but we were now too far away. He went back to the wheel and used the bow thruster. Up came the pole again and I missed twice before finally managing to get the wretched thing on. Then I ran back to the bow to fasten the other end properly. John must have thought I’d gone mad and called down that I needed to be ready with the stern lines. Back down the length of the boats, pick up the windward line and clamber gingerly down the stern regarding the approaching stone quay. This one did have a couple of old tires to protect the stern and I had the ball fender floating behind us. Then fortune favoured us. A man on a bicycle stopped and offered to take our lines. He fastened the port line and then I climbed off with the starboard. I thanked him in my best French and he smiled and nodded as he climbed back on his bike. John tightened up the pole lines and Lyra was strung between poles and shore, with me on said shore. John had to wrestle the passerelle back on by himself and then we were set. 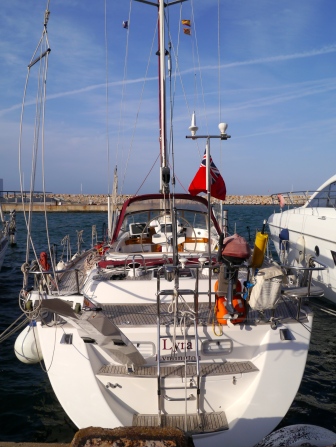 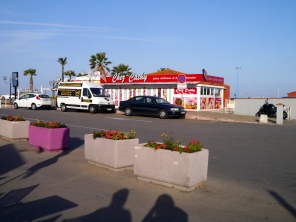 Later that afternoon the other Najad arrived here and spent a time circling looking for somewhere to land, so its not just us that is foxed by the French system. Afterwards John reflected we should probably have used the boathook. Another thing that becomes self evident as soon as someone says it. We will be ready next time, which will probably be in the morning if this weather holds.