We finally set off for Ibiza early on Monday morning. The forecast was for calm seas, no wind and occasional showers, mostly coming to Burriana in the afternoon. We thought we would probably outrun these and set off into a glorious sunrise. 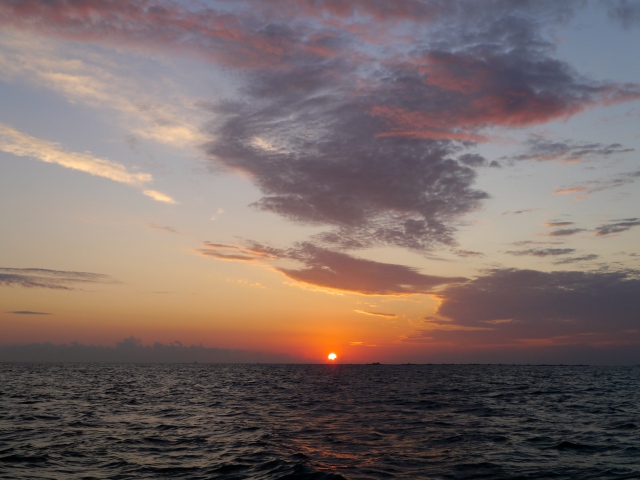 The Skipper took warning from this, but as we had to go anyway kept his doubts to himself. It is a long passage and started reassuringly as forecast. On we motored across a flat sea, after so long we could see the rain showers ahead to either side of us and righteously followed our course between them. About thirty miles out from San Antoni visibility suddenly dropped and as John switched on the radar a yacht loomed out of the mist to pass us on the starboard side. There was little else about, but we could see the purple washes of the rainstorms, even though John had adjusted the set to ignore rain. Large drops began to fall and became persistent enough to penetrate the Bimini. We donned our oillies and the heavens opened, rain pouring through the canvass as we cowered under the double layer provided by the overlap of the spray hood and Bimini. Lightning glowed in the cloud above; thunder rumbled all around and we could hardly see past the end of the boat. I consulted the pilot book to check the lights on the entrance to San Antoni and started making log entries every half hour in case lightening took out the instruments and we had to navigate the old fashioned way. John went out to stand stoically behind the wheel, so he could change course quickly if need be. His yellow oilskins glowed in the murk, slick with wet. The deck was overwhelmed as rain ran straight over the sides in a waterfall and every so often water slapped down from a puddle collecting in the roof of the Bimini as we swayed from side to side. 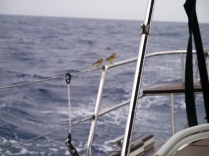 At this point we were joined by a small yellow bird, just a scrap of fluff and feathers, which landed on top of the winch and clung on. It looked cold and bedraggled, poor thing, and every so often let out a piercing piping noise. It is easy to see how fishermen and sailors become fixated by omens and superstitions. As it was, I needed to go below to the toilet and John told me to close the companionway hatch behind me to stop the rain falling inside. On my way back up the steps he gestured as though heading a football, which I took to mean that he was reminding me the hatch was shut and not to bang my head, so I opened the hatch. What John had meant to convey was that in my absence the bird had fluttered into the cockpit, staggered along the seat, hopped up to perch on the hatch in the shelter and was sitting directly above my head. As soon as I moved the hatch it flew up, the wind caught it and it was carried away behind us. We heard it peeping plaintively and watched helpless as it wheeled about. Then, suddenly, there were two of them banking and diving around us. They wheeled around the boat calling to one another before making several futile attempts to land, little wings thrown back in alarm as they came in, swept away each time by the wind as they touched down. Finally first one then the other gripped the rail and clung on. They sat next to each other, quiet now. They were so similar it was hard to tell if they were a pair or a parent and child, one did seem a bit less capable and more disheveled than the other.

Then the scruffier one disappeared, but looking through the windscreen I saw it hanging onto the jib sheet on the deck, the other piped shrilly at it. After a while the sleeker one joined it and eventually they both managed to flutter up to shelter in the ropes coiled at the lee side of the mast.

We all pressed on. After a while the rocks of Ibiza loomed out of the gloaming, the cliffs and islands round San Antoni and, away to starboard, the more distant beak of Vedra. It was a welcome sight. As we approached the bay our talismans flew off with a cheep. John reckoned they called “ Come away Big Bird, here is Land” in deference to his yellow oilskins. We plodded on without them, to be met by two sodden marineras in red fleeces bravely bidding us welcome as they took our lines.

That night the Skipper “tret me to a slap up meal” in the marina restaurant, after which we slept like logs.