Posted on September 6, 2015 by yachtlyra

After our Die Hard with an Anchor arrival at Burriana on Thursday things have calmed down as we wait for a suitable weather window to venture out. On Friday when the storm came through it was most comforting to be fastened up securely to the pontoon. The weather was due to die back on Saturday, but we decided to wait till Sunday before heading across to Ibiza to let the sea state calm down. The marina has not charged us extra for taking up three spaces, or indeed for damaging the standpipe we knocked over. It lay neatly along the edge of the pontoon just ahead of us most of Friday and then a couple of marineras came by, stood it back up and reconnected its water and electricity supply. John said it was sporting of them to allow us another crack at it on the way out. This will now not be till Monday as we woke up at six this morning to steady rain, again not forecast by some of the weather stations. After finding a Spanish forecast, which predicted the rain would follow us most of the way across, we decided several hours of drenching, with accompanying lower visibility, would be rather miserable and went back to bed.

It has been something of an eye opener to spend a bit more time in Burriana, which we have hitherto found a bit dull. In our previous stays we have not ventured much beyond the immediate harbour, taking the short cut across waste ground to the beach. On close inspection there are shops and cafes and, behind the initial rather forbidding line of high rise apartment blocks, a grid of pretty two storey villas with lovely gardens. We wandered about these on Friday night looking for a restaurant called Pinocchio’s, John had seen good reviews of online. In a surreal moment, just as we thought we would need to recourse to Google maps, a small van with a life sized Pinocchio figure sat on its roof came out of a side street and headed up to the main road. We followed the direction it had come from and found we had passed quite close to the restaurant on our initial sweep. 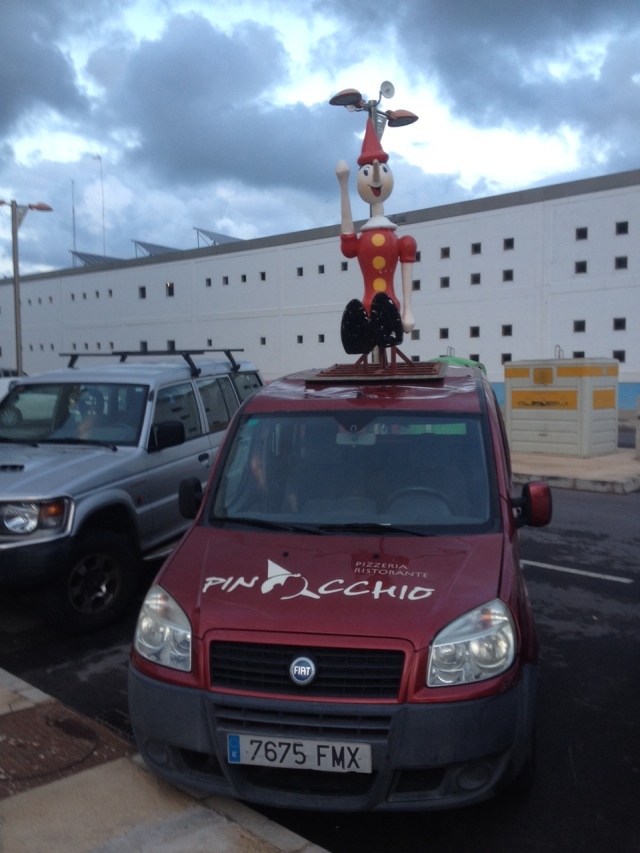 This was just as well really as they did not open till eight thirty and as it was we were their first customers. As the evening progressed the place filled, so that groups chancing a late entry stood waiting at the bar for a table. It was easy to understand why. The atmosphere and food were both excellent and the pricing very reasonable. Our meal? First we shared a starter of roasted vegetables from “Gepettos garden”, which seemed also to supply the local greengrocer we had visited earlier in the day. I am not sure I will be up to producing such an elegant fan of thinly sliced aubergine and courgette and am certain I will not manage the crisp wall of noodles, which embellished it. Then we both had sea bass, with a “seafood orchestra”, the bass was cooked to perfection and the players turned out to be scallop, spider crab and lobster accompanied by strands of seaweed and samphire all in yummy bisque. And yes, we had room for desert; I had an apple tart with homemade vanilla ice cream, but John’s pannacotta with raspberries was definitely the best choice. To round it all up we had lurid limonchello shots after our coffees and wobbled happily back to Lyra past the parked Pinocchio car. There were so many other appetizing options on the menu we look forward to eating there again.

Pork chops tonight, chez nous with another early start in the morning. Fingers crossed we set off as the girls and Johnsey arrive early Tuesday.

This entry was posted in Food and tagged Burriana Nova, food, Pinocchio's. Bookmark the permalink.

2 Responses to Time Passes in Burriananova