Despite our moving to allow it sea room the dredger did not immediately spring into action, but by the time we had arrived back from our boat trip it was sitting in the middle of the channel in full swing. The noise from it is horrific. There is a general low level rumble over which the plaint of metal on metal sends an irregular searing whine. A lonesome whistle that is going nowhere soon. When it does stop the silence echoes with wonder. There is no escape either below deck or in any of the marina bars. After one afternoon we decided an outing was in order for the following day and went to Alvor.

Last autumn our neighbours from home had taken us there and it was such a lovely spot we wanted to go again. This time we took a taxi, which went rather faster than Keith had. We whizzed  anticlockwise round the roundabouts and overtook all before us on the straight. Nearing our destination we passed a small airfield and our driver told us we could book to go parachuting from there for adrenolini, which seems to be the word of the moment. I was glad enough to arrive in Alvor.

He dropped us off at the taxi rank, which was unfamiliar territory. At first we took a few wrong turns before finding our bearings and after that we had the pleasure of navigating by passing places we remembered from our last visit. There was the Irish pub, there the wine merchants, here the walk round store, where Sheila had tried to find Marigold gloves and so on until we wandered down the hill to the pretty harbour. We had a coffee in one of the bars and then walked along the promenade in the direction we had not already covered. It soon petered out into a rough trail, for which my sandals were not fit. So we sat on the wall, dangling our legs and looking out over the estuary. 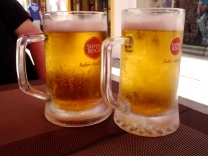 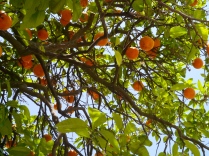 As we sat small martins dipped and swooped over the shore catching insect, if the birds skimmed too close to the water, a foment of small silver fish flipped over each other and disappeared with a clatter of splashes. our attention was caught be movement on the sand, hermit crabs, each with a single large white claw were two stepping about the strand, unconcerned by the aerodynamics of the martins.  After a while a brown wading bird with a long, bending, narrow beak landed and began walking along the wader’s edge. This time it was the crabs’ turn to flip into their shells in a prudent Mexican wave. The wader plodded past them unconcerned, more interested in poking about in the mud for grubs. Eventually we stood up to head back and caused pandemonium – birds scattered, fish flipped and crabs hid. We had been sitting long enough to become part of the scenery. Once back at Alvor we had lunch in the first restaurant, another branch of Navigator. We shared Portuguese paella, which had a touch of chilli and an abundance of seafood, watching would be windsurfers take their first tumbles in the harbour.