Yesterday was Mayday, we toddled off to Sopromar to tell them how delighted we felt about their work and to buy a welcome mat to protect the new deck. We also had a small electrical glitch to report. Since the fitting of a new gas alarm, the switch to allow gas to the cooker only worked when the autopilot was on. We saw Ricardo, he asked had we tried the new Torquedo electrical outboard, John said not yet, we had put the battery on charge. Ricardo exclaimed it was charged. John asked if he, Ricardo, had tried it. Ricardo’s face lit up, Yes! They were becoming reps and had ordered four more on the strength of the experience. He laughed out loud at our electrical problem and shaking his head took us across the yard into the electricians workroom. This was remarkable because it was so very clean and tidy and because of the pet. A large cage on the left housed a very fluffy, white creature, groomed to a silken gloss. A small wire brush clogged with long white filaments rested belly up on top of the cage. Sat in its house it was hard to tell if the animal was a large long eared guinea pig or a small, short eared rabbit. We both thought bunny, but at the time passed no comment, so actually it was the elephant in the room, as they all shook their heads and chuckled about our problem. The electrician is due to come out to sort it out today.

Naturally we then had to have a go with the outboard ourselves. John made short work of blowing up the inflatable dingy. We had a quick practise assembling the outboard in the saloon before launching the dingy. John climbed aboard, I passed him the outboard one piece at a time and he set it up, slotted in the magnetic key and was ready for off. Ever cautious, I passed him the oars before joining him and we had a swift, but satisfyingly quiet tour of our pool in the marina. It was magic, propelled by a gentle hum rather than a spluttering roar. We turned heads. People were probably startled, thinking they were being pursued by a fridge. What is more there is no way I could have passed the petrol outboard down to John without damaging something vital on either him, me, Lyra, the dingy or the outboard. We swapped places and I had a go. I have never driven an outboard, but this was very easy until I had to come back to Lyra. I was rubbish. I went left instead of right and forward when I should have gone back. We kept circling and having another go, tension rising, until I finally made it. John could not understand what was wrong with me. I thought it was having to work left handed, which is how he steered. We swapped sides again and were off  with the tiller in my right hand. This time I managed to dock first time, albeit at a rather fast closing speed. We are going to have another go today, in a minute. No doubt the ‘trician will arrive in time to watch me come in. 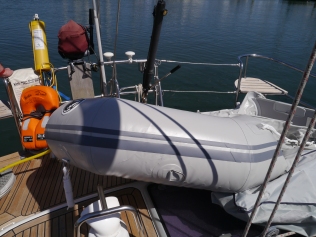 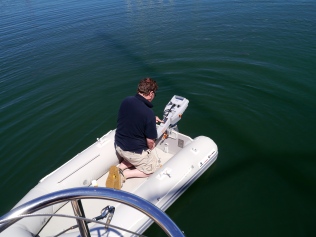