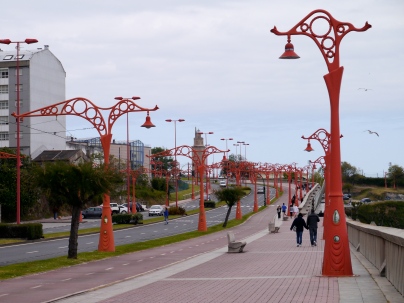 We were guided in to Spain by the only Roman lighthouse still in operation. It seemed only polite to pay our respects, especially as Torre de Hercules was but a mere stretch of the legs along the magnificent promenade from the marina. In high season trams run along the front under the elaborate orange lights. At this early juncture the prom is the province of a few keen joggers, cyclists and fellow walkers, a pleasant stroll in the early morning breeze. We stopped off to look around the small museum dedicated to the tower, where the English translation endearingly interpreted flashes as sparkles. Then we headed off to our lighthouse, which currently sparkles four times every twenty seconds. Intending to climb the tower itself we shunned the use of  rented Segways to take us up the approach ramp.

The tower itself is impressively tall and sturdy as a Scottish castle. Obviously not terribly Roman. It turns out the original Roman tower was encased in a massive stone facade in an ingenious piece of eighteenth century preservation. The helter-skelter relief climbs the tower to commemorate a ramp which used to wind around the outside of the original lighthouse, so that oil could be trundled up to the top to fuel the light. Inside the facade the original Roman structure of vaulted chambers, with irregular doors and windows has been preserved. We wound our way up through the various chambers, higher and higher to finally emerge at the parapet below the current electric light and fabulous views over the city and the sea. Though not always a one for towers I would recommend this one. The climb was up ample stone staircases with an excellent hand rail and lots of natural light. The labyrinth of chambers provided interesting resting points. Mind you I would not have fancied pushing oil up the old outer ramp, even if the tower was some twenty meters lower in Roman times.

Following our descent we headed off to explore the park full of art work that takes up the headland. We wandered at will and paused to bask in the sun on wooden benches cunningly formed in the profile of the hillside. The spring wild flowers were a delight and there was a variety of bold sculptures. I was particularly taken with Familia de Menhires by Manolo Paz (1994) and snapped away at this engaging family of modern monoliths. Eventually we wound our way back to the promenade, by which time the old legs were beginning to know we had climbed a tower, so it was good to arrive back on board and put the kettle on.

This entry was posted in sight seeing, Uncategorized, Walking and tagged sculpture, Tower of Hercules, walks, wildflowers. Bookmark the permalink.

1 Response to To the Lighthouse