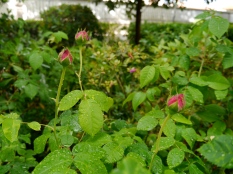 We set out this morning to visit the castle across the water only to find out it was shut. Monday is museum closing day.  On the way back we kept encountering English families and the occasional American coming towards us – a big cruise ship was in, leaning wonkily against the dock at low water. We headed up the hill to the Jardin San Carlos in the old town. Spanish families, mostly adults with older parents, were making their way out of the hotel. An unprecedented number of people were about.

Though small, the garden itself was an oasis of calm, formal, mostly green, reliant on shape and texture, but with roses and camellias blooming at the same time. We looked over the stone balcony at the dock and the huge cruise ship and I went through one of the iron gate and threaded my way amongst the shrubs. A child’s world of jungles and hiding places.

We left by a side entrance and meandered through the old town, into a church where monk music was playing,to the courtyard of the convent, with it’s Punch and Judy frieze of holy ladies and finally to the copper domes of the building at the top of the big square.

We sat in our ‘usual’ cafe and had cappuccinos, hearing words we understood being spoken, seeing people in holiday clothes. We headed off out of the top of the square to look for food shops and found a bustling hive of activity. Shops and restaurants, ladies wear and shoe shops, a hardware shop! We were straight in and managed to buy a small bread knife with a mix of our Spanish and the proprietor’s English. Triumphant we headed off into an ‘Urban Shopping Paradise’ to be met by metal shutters and graffiti, a venture abandoned before it had really begun, leaving a subterranean supermarket and some mood music. We came back out and the original food shops were thriving. Here were all the Galicians going about their business or sitting chatting under the trees. There was a bakery, where we bought bread and managed to resist the pastries. We carried on climbing the street with thoughts of fruit and local cheese to compliment out bread and bread knife. A picnic. The street climbed on and on, with uncharacteristic indecision we kept on going past lovely greengrocers and intriguing small supermarkets. We consulted the map. We were near the lighthouse, it would be worth going along and seeing if the aquarium was open. Aquarium Finisterrae, literally the aquarium at the end of the earth.

Open it was, and well worth the walk. As we came in we passed two groups of excited, very small schoolchildren, eager faces thrilled by the baby clown fish. We headed outside to huge sea water pools, where we watched the seals play. Back inside we headed downstairs and along a subterranean corridor into a majestic homage to 20,000 Leagues Under the Sea. A floor to ceiling, all encompassing sea bed, shoals of big salt water fish and a shark worthy of Damien Hirst swimming behind Captain Nemo’s desk. We sat on a leather Chesterfield watching them all circle, in sole command of the Nautilus. Back upstairs the fish continued; tropicals, marines- including tiny baby ‘Nemos’ kept safe from their elders in floating tanks- and  vast, creepy sucking loach. They were complimented by tanks of creatures ranging from tropical frogs to octopus. We could not follow the explanatory texts, but they appeared to encompass evolution, pharmaceuticals, archeology and comic strip superheroes and heroines.

There was to be no picnic. How could we resist eating at The Restaurant at the End of the Earth? We had the picnic for tea, on the boat, as the wind got up!

This entry was posted in sight seeing and tagged fish, food, Garden, seal. Bookmark the permalink.