The crossing to the small island of Procida, at the edge of the Bay of Naples is just a matter of about thirty miles, but with stronger winds forecast for the late afternoon we rose early and set off at seven, so as to arrive before lunch. It was not as still as mornings usually are, which made leaving our rather snug berth something to think carefully about. Fortunately we do have a bow thruster and John deployed it to good effect, though no doubt waking the neighbours. Although the wind had been strong enough to cause concern coming out of the harbour there was precious little to sail with, so we motored and listened to music. At around eleven we had our first sighting of Italian dolphins off the starboard bow. They were busy fishing, so we could just see their dark backs skimming the surface as they circled, with the seagulls gathering above. Ahead of us the steep sides of the headland and the islands of Procida and Ischia blocked the horizon. 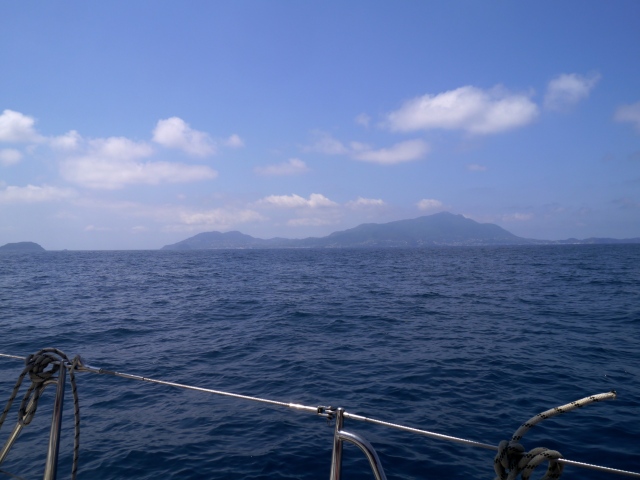 The better known Ischia is much larger and higher, but promised to be very busy in high season. We had decided to save it for later in the year and had managed to book into the marina on Procida. It was Sunday and as we approached the islands the weekend sailors were out in force. There were also lots of different ferries, all travelling at lightning speed and taking no prisoners. We held our breath watching tiny motor boats cut perilously in front of giant ferries. It was a nerve-wracking end to the morning and did not improve much as we entered the harbour. There were no passenger boats in the marina, but lots of other craft were milling around and a couple of other yachts were setting out. One of them had an azure Sunsail sail cover familiar from our chartering days. Now we were the people avoiding the charter boats, precious about our own yacht. The marina office picked up our call on the radio and said someone would come out to us. It seemed a long wait for them to do so. Behind us a man sat with his family in a grey rib was asking me where we were going in sign language and I had to just shake my head and shrug. Finally a marinera sped over in a tender and headed off with the usual ‘Follow me’. John tracked him across the small space and turned round to back into a berth at the end of a pontoon. We were nicely reversing in when a really beautiful little wooden boat came on our inside trying to cut the corner past us. John gave him no quarter and the interloper looked appalled and backed off to go round the front of us instead. The Sunday morning blood rush to hit the open seas was riding high and as we tied up more boats made there way out past us, all cutting the corner. 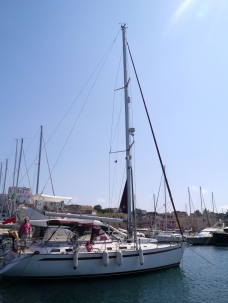 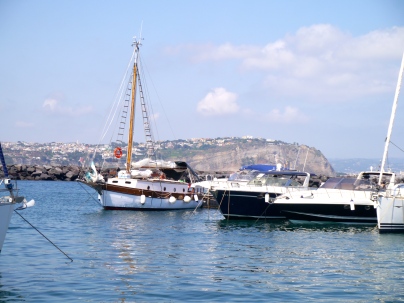 In our pilot book Rod had spoken fondly of Procida as not being tarted up for tourists like Ischia and Capri. Being tarted up is one thing, but it could have done with washing its’ face and hands. The harbour wall was lined with wheelie bins swamped by vast mounds of plastic bags full of rubbish. Litter blew in the streets, where grime abounded. On the upside the buildings were elegant in style, with faded and pleasingly shabby paintwork. The trees along the front were glorious, big oleanders smothered in blossoms in shades of pink. We picked a small café with tables in the shade of makeshift constructions. The Maitre D had something of Rowan Atkinson about him as he crept about, head slightly on one side. His food was very good indeed. John had linguini with seafood and I had gnocchi with cheese and tomato, which had great globs of half molten cheese and came with lashings of Parmesan. John had beer and I a small jug of slightly fizzy white wine. The place was deservedly busy with an interesting clientele, many of whom were on first name terms and came out from their tables to greet one another. 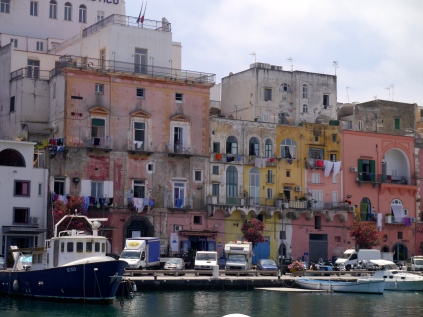 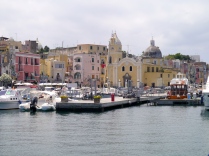 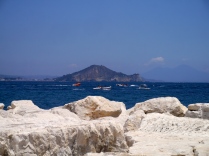 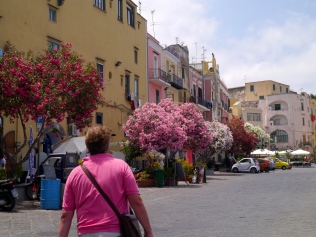 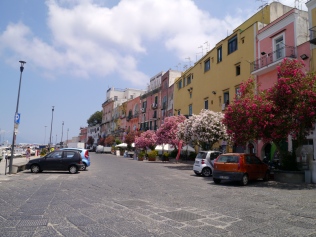 We waited until evening to explore further and then only wandered along the flat. We found a bar to sit outside of to watch the France v Iceland game and they brought us so many snacks to go with our beers we needed no tea. By the end of the first half France had settled the match, so we headed off back to Lyra. We have watched a lot of first halves in this tournament, partly as it starts so late here and we usually have an early start. As we walked back to Lyra we looked across at the glittering lights of the Bay of Naples, tomorrow we will be over there amongst them all.

This entry was posted in Food, Sailing, Sightseeing, Uncategorized. Bookmark the permalink.