Our journey is now taking us into the part of Italy where Grandad John was landed in 1944, to become embroiled in the fighting at Monte Casino. The marina at Nettuno is just along from Anzio, where the Allies landed on the Italian beaches. We think Grandad John landed further south, but he spoke of Anzio and was deeply critical of the American commanders who launched men into landing craft much too far out to sea, as they would not risk their ships. Many drowned. From the sea we could see a large white church and there is a big American cemetery full of young men who went no further. It proved to be the first in a series of mistakes made by those in command. The landings were virtually unopposed and forces could have pressed on to take Rome, but did not and were then trapped fighting to take Casino.  From now on we will be looking at places and wondering if Grandad passed through them. 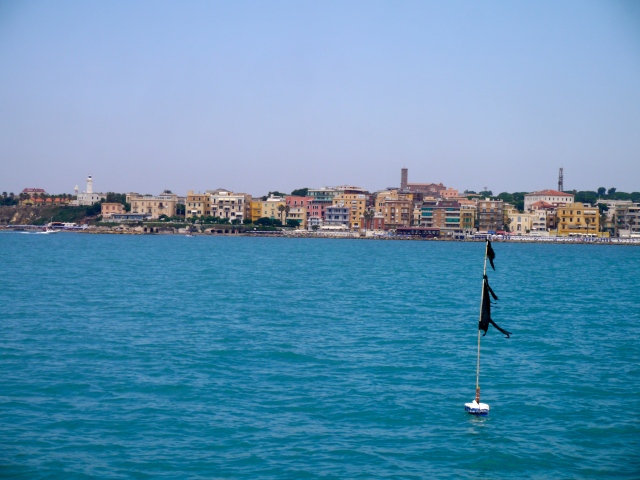 The marina has been built since that time, but is in the process of more building work, so the plan of it was blanked out on our chart. We had just pulled the fenders in for this short journey, so I dropped them back out and put the stern lines on before we went in. The entrance wound round on an uncomfortably tight twist, not helped by another yacht coming out cutting the corner as we headed in. There were piles of rubble and twisted wires all around. John radioed in and a deep voice told us yes he could see us and to keep coming left, to number one. We crept along the outer quay counting down numbers. If number one was in the corner someone else was moored there. We turned left again and started a second countdown. It looked as though we would be all the way inside, next to the boatyard. A little blue car hooted at us from the shore and the man inside it waved us on. The berth was right inside by the boatyard. John turned round and began to reverse. The man from the car proved to be rather large, he stood planted on the shore waving thick blue ropes at us. I took off our stern lines and he threw me his, which were already fastened to rings on the quay. This worked very well. Then he held out a lazy line and John took it forward. Our man stood watching till John had made fast the line, then nodded, said ‘Bye Bye’ and headed back to his car. We manoeuvred ourselves back close enough to deploy the passerelle and headed out with the boat papers. 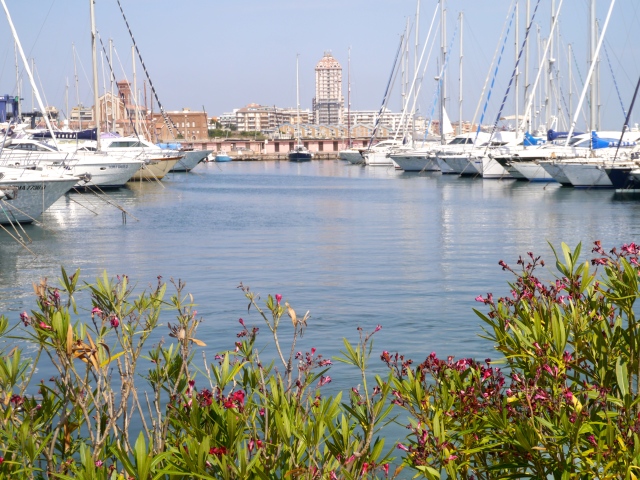 We waited till evening to explore. At the end of the marina an archway led up into the enchanting old town, narrow streets and cobbled squares on which tables were set out on the slope. 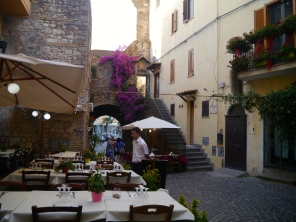 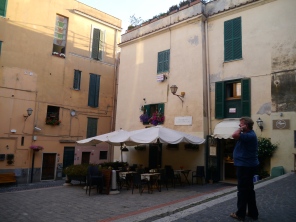 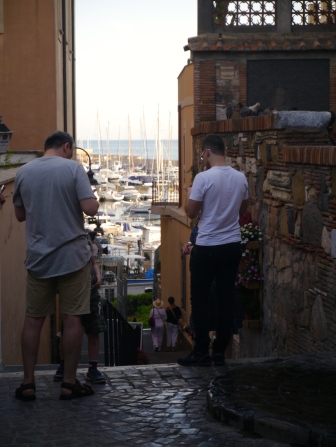 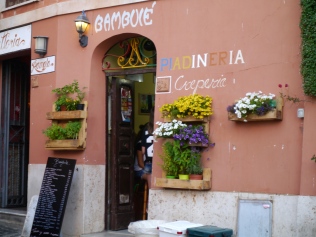 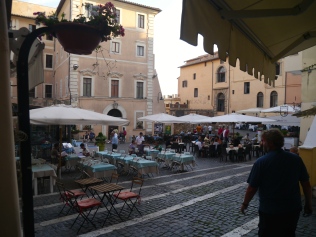 We ate in a large square full of flowering plants, where pigeons and people alike drank from a trickling wall fountain. As evening fell it became very busy and microphones set out in a balcony told of music to come. We both had fish with a rosti potato topping. When I praised this the waiters became very animated and talked football with us, commiserating us on our woeful performance and saying it had been a miracle for them to beat Spain. We came away the best of friends. It was not early, but there was little activity from the musicians and we had another early start as tomorrow is a long leg down to Gaeta.

This entry was posted in Food, Sailing, Sightseeing, Uncategorized. Bookmark the permalink.