Messing About in Boats

Sunday dawned and we set off before seven, having been unable to secure a booking at either of the marinas next on John’s list. If there is no room when we arrive we will anchor off as the wind overnight is due to be light and offshore. It was a long passage and John put the music on to pass the time. All the way down there was not a breath of wind. We were glad of the Bimini and the breeze stirred by our own motion. To one side rose the shadow of the mainland and all around were dark steep sided Tuscan islands, Elba behind us, Pianosa to starboard, Giglio ahead and in the distance off the port bow the storybook island of Montecristo. 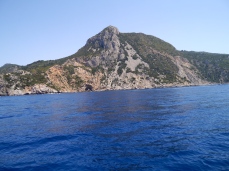 The sea was glassy calm so we easily spotted the line of flat rocks strung out off shore, the anticipated hazard of this passage. They are called the Formiche Rocks, which seems apt given their tabletop surfaces. The unanticipated hazard came as we passed between the island of Del Giglio and the high peninsula of Monte Argentario, which looks like another island from the sea. We came up closer to the Monte and suddenly there were boats of all kinds, everywhere. First we were passed by a massive police launch, kicking up a wake to set us tipping and tilting, and there were muttered complaints from the cutlery below. Then pandemonium broke out. Big boats and small boats, row boats and sail, weaving in and out of one another, we were the only people plotting a straight course. Each boat in this chaotic maelstrom was stacked to the gunnels with people. Whole families crammed into tiny motor launches, brown bodies reclined on the front of big motor yachts, people everywhere, none of them were looking where they were going. Still no wind, but the sea was churned up in streamers of milky turquoise and white and we racketed about on little choppy waves. The smell of water hung in the air, which buzzed with engine noise. All along the shore in the shadow of the mountain boats that had given up the chase lay at anchor. We rounded the headland and there were yet more boats whizzing around, and just to make things even more interesting lobster pots scattered at random. However these survived I do not know, but by the time we reached Cala de Galera, we were both feeling frazzled. It seems that on Sunday in Italy instead of all gathering for a large family meal, like they do in Spain and France, everyone sets out in their launch to create mayhem on the open sea.

True to form as we approached the harbour wall the afternoon breeze came up and by the time John was radioing in it was blowing Force three. The good news was that the harbour itself was half empty, drained of all the berth holders, who were out charging up and down the nearby coastline. Even better news there was room for us for the night on the visitors pontoon. The marineras came out and helped us onto a berth, where we rested in splendid isolation till around six when the fleet all came trouping back in. They made an orderly file and the marineras dealt them efficiently into their various berths. It took a couple of hours in all. Tonight we are hoping they are all off home after the weekend and we will be able to have a nice meal out.

1 Response to Messing About in Boats