Today we started our new French logbook with the journey from Ste Maxime to Cannes. It was an early start and by seven thirty we were following the buoyed channel out of the harbour. This was partly to avoid the ferry boats, which start at eight and partly to make sure we arrived well before lunch, given our experience of being turned away from St Tropez yesterday. It was a very still morning and very clear after yesterday’s rain, so we motored along enjoying the high mountains of this stretch of coastline. At around nine we could see Cannes ahead with the stunning vista of the snow clad Alps ranged behind it. As we drew closer they disappeared as the nearer hills behind Cannes rose up dominant.

It took two hours to arrive by which time there were a few other boats around. Unfortunately they all seemed to be trying to go into Cannes. The radio traffic on Channel 16 was hectic, with boats talking across one another in both French and English. One French lady kept coming back, just as it seemed safe to put out a call and she was going on at length about something. By the time John was able to speak we were in the harbour itself with boats every which way. He handed me the radio and I managed to get through to the English speaker and to explain we had a reservation. There was an ominous silence, then he asked if we had booked over the Internet. ‘No, by telephone.’ More silence then he told us we were on Hash huit, H8 on the East side, the seaward side. We looked across the bewilderingly large number of pontoons and could not see any of the lettering. Boats were piling up behind us, so there was no stalling or turning round. I asked if he could direct me to H8, please. ‘H8 came’ the response, a bit tersely now. John was asking ‘where is it?’ also somewhat terse, though understandably so in the circumstances. I was beginning to feel some sympathy for the garrulous French woman. Then an American voice with a strong New York accent immediately above me said ‘That’s H straight ahead of you there, I think 8 will be right in at the far end’ I looked up, wondering if God was from the Bronx, and there was a man in baseball cap, high up on a big power boat looking down at me and pointing. As soon as he had pointed to it we could see the H. We both thanked him profusely as John headed towards the channel. ‘No problem, they’re a pain in the ass here’ and we could hear him negotiating his own entry with the control tower, having helped us.

We turned to reverse, but did not go far as another boat was in the channel ahead of us loitering. It then became clear that they had ventured down the wrong channel and wanted to back out. It was hard to know which side of us they needed to pass; probably they did not know either. John pulled out where he could, they reversed past us and we tried again, counting the spaces down and sure enough 8 was near the far end. By now I was standing on the end of the stern holding both lines planning to jump for it with them. As we rounded into the berth John spotted a man sat peacefully fiddling with something on the end of his own boat, the one we were coming in alongside of. I called to him in French to help me ‘Bien Sure Madame!’ He downed tools, took one line and looped it on a cleat, swapped me the free end for the other, both of which I made fast and then was able to step onto the pontoon and hook the lazy line for John to take forward. I thanked him and he just nodded and disappeared back to his task. 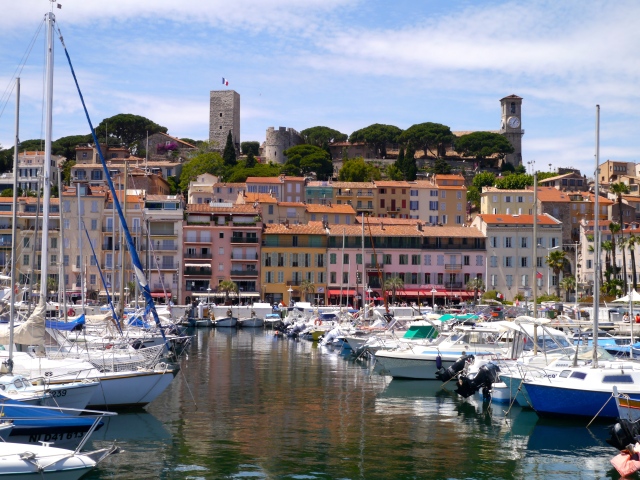 We set off for the marina office and were fortunate enough to be going out through the electronically operated gate as someone else was coming in. We did not realize at the time that this gate was extremely flakey, even those with a regular berth and a card pass struggled to trigger the mechanism. There was a button to press in order ask the control tower for assistance, but the lady who answered had been appealed to so regularly she was abrupt to the point of rebuke. Every time someone managed to open the gate there was a rush of people in the vicinity taking their chance to pass through. It engendered a certain camaraderie that crossed the language barrier. The office, when we found it, was upstairs again giving a panoramic view of the harbour. There were the pains in the ass, there were three of them huddled together and they looked hard pressed. Two took turns to speak on the radio, probably depending on the language needed, and the third consulted a big computer screen and relayed information from it. We were served by a different front of house staff, another trainee, a pleasant young man this time, supervised by a severe lady. They were all obviously working flat out. Given how much calmer everything was later we must have picked the most hectic time to arrive, with some people just calling in for a lunch stop. Several came and left on the opposite side of H to us, two of them whacking the unfortunately well named Impalla as they did so. As we headed back onto the pontoon our American helper was also coming in and aided us again when John’s temporary card would not open the gate. This time he was trundling a pushbike. He and his wife were running a cruising business. He was really generous and told us about the food market here, how good cruising was in Turkey and Croatia and various ports he recommended were worth visiting on our way round Italy. ‘In my opinion,’ he added modestly, filling me with nostalgia for Columbo. 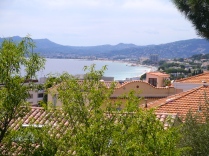 For the afternoon we climbed up the steep hill to the castle, which now holds a museum, containing artifacts collected from India, Europe and South America. We were particularly taken by the headdresses and dance masks from Ladakh, which we visited thirty years ago this August and witnessed people still wearing similar items in a festival. Hanging in the museum the objects had the slightly derelict look that costumes bereft of people often have, but our memories tumbled from them. Outside the castle the views of the harbour were spectacular, and there was Lyra in amongst the jet set. On our way back we passed down a narrow street of restaurants and resolved to come back this evening.