We are sitting in the shadows on the back of Lyra in the evening dark sipping our tumblers of chilled wine. The night is still and the swallows have left, abandoning the insects to the bats.

Earlier in the evening the quay was both playground and shower room for various dogs and their owners. First the dive school came back. The main boat goes out with two dogs on board, one sleek with a brindled coat and big pointed ears like an Egyptian hound, he is the lead dog, fit and active, quick to the heel. The second is a young golden retriever, smaller, fluffier and eager to play. The two raced around the concrete playing the ear biting game as the divers shed their wetsuits and dumped their gear into the disinfectant tub. Then it was the turn of the dogs to have the salt hosed from their coats, first the brindled dog came at a word and sat tolerating the hosing down. With one look at the proceedings the retriever turned her back and mooched slowly away with leonine tread. To no avail, she too was called back as her partner in crime shook efficiently and stepped back. She came over reluctantly, sitting still some way from the hose and being hauled over by the collar. She fidgeted with little jerks of the head and escaped at the first opportunity. That would do. The divers disappeared in ones and twos and the dogs bounded after their owner.

Next on the scene came a small, skinny black dog with tan ears, walking ahead of a young couple, an eager little beaver with his pointy nose in at everything. He had clearly no experience of boats and was keen to come up the gangplanks. He was called off and scampered away, bandy legs, attached at the four quarters his barrel body, flying in all directions. On his return he evinced a definite experience of the cold water hose. He backed off and would not come close when called. Eventually he had to be caught up under the tummy by the young woman and held squirming as her partner sprayed them both. As they retreated a boat came in behind us with a French family on board. They may have been locals for a man on shore was there to take their lines. A young lad dropped fenders out and his dad did most of the work and afterwards stood chatting to the man from the shore. Meanwhile the family abandoned ship, entering stage right. The youth swung on the posts around the quay and his little sister sauntered along it twirling occasionally to watch the effect on her cotton frock. She looked to be seven or eight, with shoulder length straight hair and a coy tilt to her head. Their dog scuttled across the concrete, a tiny Yorkie, clearly used to boats and glad to be back on dry land. It had the hunched gate of a dog in need dump, scurrying to find a safe place. The woman followed it hugging her jacket, still chill from the sail, ready with a plastic bag. Business managed and disposed of she scooped up the dog and retreated back aboard, the two children followed.

The final dog of the evening was one we had watched before. A beautiful long haired golden retriever. A glorious Aslan of a dog, you want to go up and hug him, threading your fingers deep into his fur. He loped along after his owner, a tall thin man and they disappeared, exit stage left. The swallows came out. They are huge here and they swooped and dived across the quay in the gathering dusk. The young girl from the French boat came back out in her warm trousers and continued her twirling, softly singing to herself and dancing in the light limbed way of children. The retriever and his man returned, the dog’s coat damp from a swim. The man called him across to the tap and he went straight away and sat head up as he was given a thorough rinse, standing and sitting to order, impervious to having his head doused. It went on for some time, the young girl sang and the dog sat patiently. Then the tap was turned off and the dog stood, paced a few steps and waited. At his owners word he shook, a luxuriant slow motions swinging with fur and water slaying out. He stood and once more the command came and he shook again. Then he and the man walked away, but the man must have decided the dog was still too wet and they stood and the word came and he shook again. Then they regarded one another a moment before setting off home. 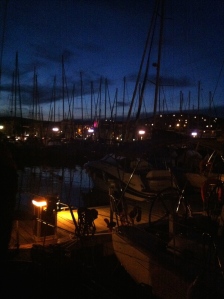 Our chanteuse continued oblivious to us, or so we thought. We watched over her. John went below to pour us a drink. He had not been gone long when the child looked across to where her mother had come out on deck to call her in. Then, for the first time she looked straight at me, “Bon soir Madame,” before skipping back to her own boat. I suddenly thought she had probably been told she could stay out whilst ever we were there and was sure to reply, so her mother could hear that I was.

This entry was posted in Strangers, Uncategorized. Bookmark the permalink.