A brief history lesson: The town of Aigues Morte was constructed by royal decree at a time when France was a little country encircling Paris with no sea coast, let alone ports. The King, Louis III struck deals for a tract of land to build a port on the Rhone delta; built a fortified town some way inland, dug canals to the sea at Le Grande Motte and had them dredged persistently. This he then decreed was the way to bring goods into France, even though the ships had to wait off a lee shore while smaller vessels transferred their goods up the canals to the town. Louis offered tax incentives for folk to come live there and kept a good few soldiers on hand. It must have cost a pretty penny and he went off on Crusade to gather some loot. This went badly wrong when he was captured and the enterprise cost a King’s random. Undeterred Louis did enough crusading to be made a saint and left the town of Aiges Morte as a testimony to his determination. Later France won more territory and ended up owning Marseilles, a natural harbour actually on the sea that did not need lots of effort and incentives to maintain. It soon took trade away from poor old Aiges Morte, which gradually silted up and moved even further inland under the ongoing precipitations of the Rhone. The good part of all this is that Aiges Morte was left in a backwater of history and remains a walled mediaeval town. Today we set off to visit it.

Our first intension was to go by bus, but the first one didn’t set off till nearly one o’clock, so we opted for a taxi. We had to phone one, as there does not seem to be a rank here. A pleasant man in a white taxi picked us up by the hotel on the corner and drove us past lagoons studded with blush coloured flamingos to the main gateway into the walled part of the town. As he dropped us off he gave John a card and said if we called him he would come back for us. In we went through the big stone gateway, into a veritable theme park of an attractive French town. 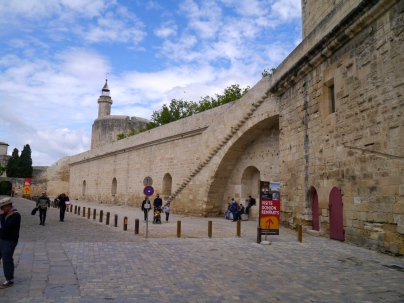 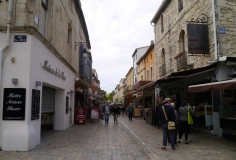 Cafes shaded by trees through which hung strands of fairground lights spilled their tables onto the streets. Down the main street the shops were open fronted with fabulous displays of biscuits, sweets, soaps and wines. Two shops specialized in biscuits and a third offered a dozen meringue like cakes of nougat as well as troughs piled with gelaterie. There was a chic artisan ceramics shop and a cheerful pottery. Behind the only fully glazed window was a frightening display of glittering weaponry, a fan of swords surrounded by big knives laid out like fishing floats. Eventually the street opened up into a square in the center of which a muscular King Louis stood above a fountain. The square was pleasantly shaded by plane trees, with an encampment of parasols demarking the areas laid claim to by the various bars and restaurants all around. Before heading into the square we took a left into the church. There was a hush about the place and people were going about their acts of worship as well as those of us just noseying. 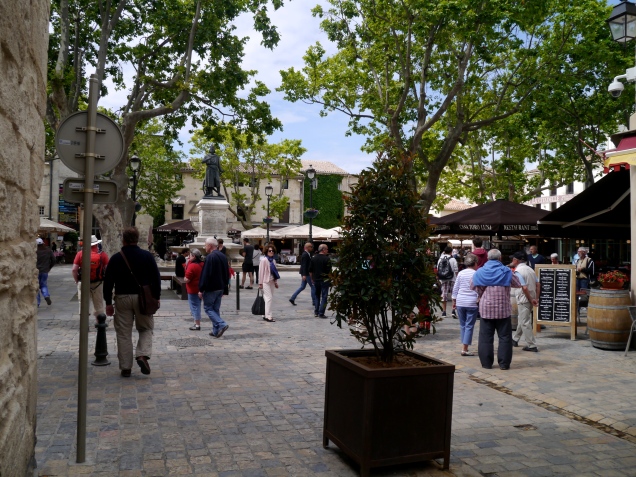 It had been restored so sitting inside the mediaeval archways the windows were of a modern, painterly coloured glass. Patterns of lozenge shaped colour, chosen for its’ symbolic meaning floated in arrays in each window. The whole place was flooded with light from them. The walls were also punctuated by a few of the usual plaster saints gazing down on their arrays of winking candles. In a prime location under an archway decorated with copper oak leaves stood a plaster Louis. There was a bit of him in a Snow White casket in a niche to his left. The literature did not specify which bit, but not a big one from the size of the box. Eventually we went back out and sat in the square for a coffee, after which I had my first exciting experience of a stand and deliver toilet. No wonder “French women don’t get fat”, no doubt Davina would approve.

After consulting the booklet we had been given by tourist information we decided to tour the city ramparts. We headed back to the gateway to buy our tickets and, given the threatening clouds, decided to walk the walls first and look inside the main tower afterwards. It was quite a way round and afforded lovely views across the pantile roofs of the medieval city and showed the layout of its’ modern seeming grid structure. Most of the town looked lived in, with only the central arcade devoted to tourism. Occasionally there were glimpses of courtyard gardens, but mostly the closeness of the buildings kept them private. The colours were of subtle pastels, faded apricot, ochre and chartreuse on walls and shutters, just shabby enough for faded elegance. 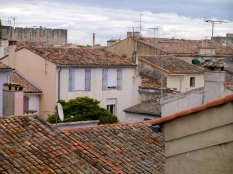 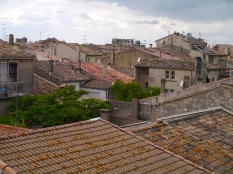 Looking out from the north wall the more modern part of the town also favoured the same hues and did not look out of place with the old part. In the street just outside the main entrance stood a beautiful two-tier carousel and a vintage roundabout. We carried on round with the threat of rain in the air. On the eastern wall we looked out across farmland, which gave onto the salt flats, which ran all along the southern flank. Two massive hills of salt had been made at one end. In the towers of the southern wall we viewed displays explaining the history of the salt works. Black and white photographs showed the salt piled in an array of cones across the flats, like haystacks. Muscular laborers with dark skins and immense biceps ferried barrows of salt around this moonscape, hard men, but obviously well fed. One of these big-armed giants must have posed for the statue of Louis that adorns the fountain. 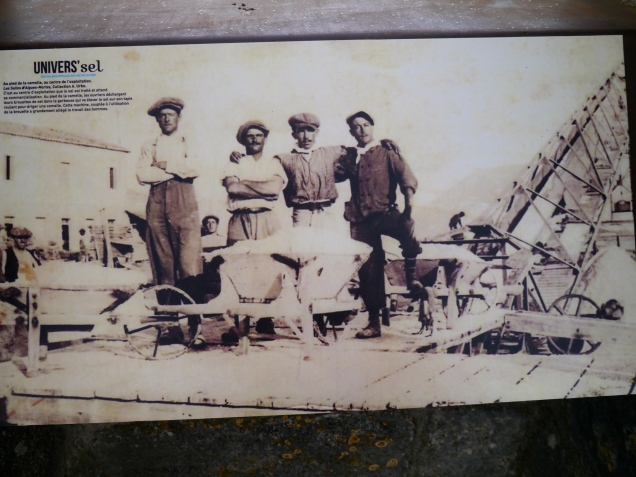 Along the western wall ran the canal, with the road and railway both running alongside it. At the end by the moated tower we could see the canal basin, currently populated by small pleasure craft. Thus we arrived back at the Constance Tower, the only piece of Louis original fort to have survived subsequent renovations. 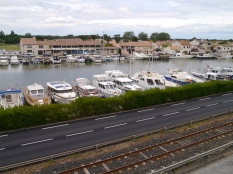 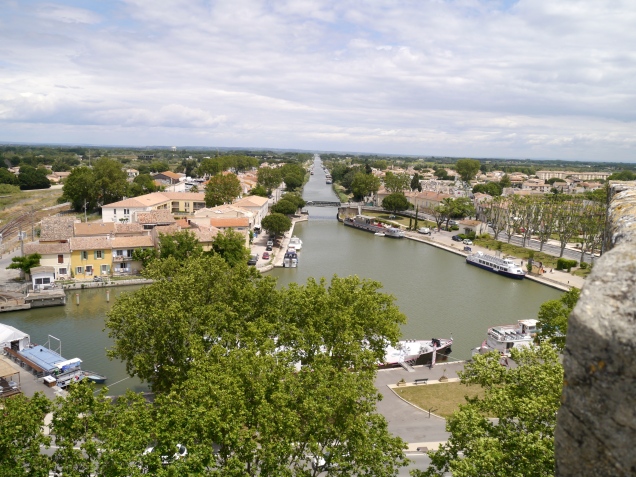 It was rather beautiful. There were two stories, each with a high vaulted ceiling. The walls were six meters thick, with a staircase spiraling through them. A high gallery ran round the lower room, with archways through which we could look down into the chamber below. We climbed further into the second story chamber, to find it a smaller replica of the room below, which gave me a disconcerting feeling of still being on the ground. Up we climbed again and out onto the roof of the tower, in one corner a lighthouse climbed still higher. From here we could see the triangular apartment blocks and some of the masts of Le Grande Motte and the lines of the canals plying towards it. Then it was down, down, down and back to the square for lunch.

Rather than sit under the melee of umbrellas in the center we chose to sit under a covered porch in the shape of a Monet arch, festooned with trailing greenery, very pretty. Le Minos specialized in beef, there was a picture of one of the black Carmargue bulls on the sign, so after a starter of salad for John and mussels for me, we had steak and chips, quite chewy but very tasty. After lunch we hit the shops. We managed to resist the potteries and sweets, but we needed soap and who could resist pick and mixing biscuits? With a smart tin full we made our way back through the gateway to the real world and after having no joy finding a bus stop phoned our taxi man.