Last year we took the girls into Valencia by taxi, but in a spirit of adventure we decided this year we would try the Metro. This the first time we have made a trip by tube here in Spain. Our first challenge was to find the stop. We succeeded in finding the stop after the one we were looking for by the simple expedient of John spotting a train pulling away from it. It came as a surprise that it was operating over-ground, rather like a tram. We had been looking for a subway with the Metro sign over it. By dint of having seen one we were able to surmise which side of the tracks we needed and duly crossed them. The next problem was working out how to buy a ticket from the machine. There was a touch screen which was not particularly sensitive to touch and hard to see in the sunlight. Fortunately a row of flags came up and after some determined pressing the Union Jack activated the English screen. While we were peering at it and trying to order two returns a train came and went without opening its’ doors. I looked inside it, there were only a couple of carriages and no conductor, so we had to persevere with the machine. John could go through the process for one ticket, but not find a way of ordering two, so we bought them one at a time and hoped Barclaycard would not alert the fraud squad. Then I noticed a sign telling us to be sure to activate our tickets before travelling. John gamely poked his ticket into various slots we had not already used. There was information about what the slots were for in Braille, but not in English. None of them reacted to John’s ticket, which was probably just as well, had one swallowed it he would not have been amused at this point. Just then a young girl arrived and swiped her ticket across a huge red button we had somehow both failed to notice. Had we been Oyster card aficionados we would no doubt have spotted it right away. Anyway we swiped our tickets and sat on a bench to wait for the next train. More people gathered so when the train pulled in we were able to observe the process of pushing a button on the doors to open them. We were off.

After three stops the ground duly swallowed us and we had to change trains to the green line. The next train was huge, but still had the open bendy bus structure of the smaller tram. Inside it was indeed green. From our seats along the wall we could look down the length of the train and see it twist and bend along its’ route. Other people sat along the sides weaving across our line of sight. It was a bit unreal, like looking down a hall of mirrors. When the girls were small we had a green plastic snake made from rigid, jointed sections. By holding the tail you could make it waggle sinuously from side to side. It felt as though we were catching a ride inside the snake. We followed the tube line graphics on the wall counting off the stations and successfully arrived at our planned destination. Then the fun began again. After riding the escalators back to the surface we were faced with a line of those barriers that flip open to allow one person through. John tried poking his ticket into a likely looking slot. Nothing happened. I suggested he swipe button above the slot. John tried this and the doors in front of me, rather than those in front of John swung open and I automatically walked through. This left me on the outside with an unused ticket and John on the inside with a used one looking exasperated at me. We swapped tickets across the top of the doors and he joined me. This would later turn out to have been a smart move on my part. We headed out into the street.

It all looked very familiar, but we had no idea where we were. We followed signs to the cathedral, but really we wanted to find the Market, as we knew it closed up after the morning. John had the foresight to have brought a street map and we found our way to the big square with the fountains. There were too many impressive buildings and too few visible street names amongst the hoardings and balconies. After touring the square we went into a coffee shop and the waiter showed us where we were on the map, so we were able to set out confidently buzzing with caffeine and after that it all began to link up with our memory.

We came to the back of the Market and plunged in to the same glorious displays of produce we remembered from our last visit. I had been concerned that in such a cornucopia of fresh goods we would be hard pressed to find treats to withstand our remaining time here and the journey home. We settled on some spices and tin of olive oil and headed off to treat ourselves to some cheese. The cheeses were amazing and the cheese monger spoke fluent English. Blessed be the cheese mongers. He vacuum packed our purchases, so we are saving them till we come home girls. Then we visited a fruit counter and were served apples, oranges, figs and peaches. The neighbouring stall was a bakery, so we bought bread and small pastries. Good job we had brought John’s new rucksack to carry it all, though I took no chances with the tender fruits and carried them separately in a plastic bag. 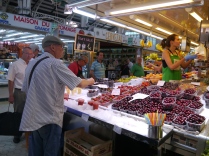 After the Market we visited a nearby Roman Catholic church in which swashbuckling statues of Joseph of the Technicolour Dreamcoat fame and his band of brothers lined the aisle. John had a marvelous time on the interactive features in the glass cases under some of them. Instead of lighting a candle in the old fashioned way supplicants can drop ten Euros into a slot, at which point an electric bulb on an array of artificial candles lights up. Some cases had red bulbs, others white and I had to restrain him from trying them all.

After our round playing the slot machines we went to the old silk market, which was a lovely set of trading buildings built around a small Islamic orange grove. John and I entered following a column of schoolchildren, all chattering excitedly, to find a whole waist high throng of them assembled in the garden. 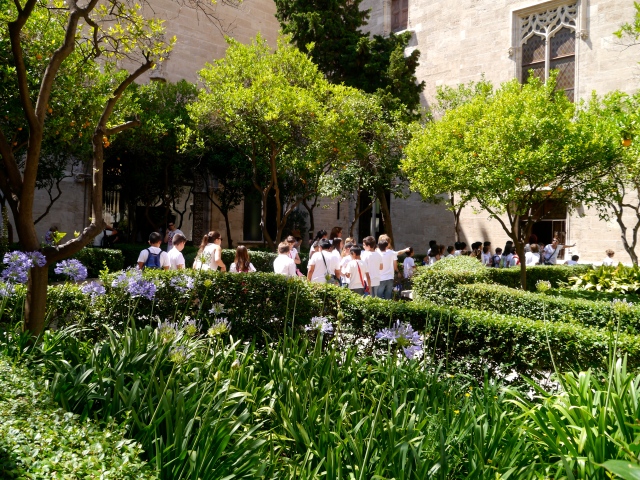 John and I waited until we saw which way they were all filing out and then went through a different door. We came out into the main hall, two storeys high, the roof supported by narrow columns, twisted like barley cane sticks and spreading at the top like palm trees. All of a sudden in they came, a group of the children, swooping onto the columns and craning their necks to see up them. It was enervating to see the place through their eyes, a playground of discoveries and the freedom to run through it. The responsible adults, poor souls I remember it well, clearly did not share my enjoyment and were busy shushing. We moved on. The adjoining room showed a short film in Spanish with English subtitles, but it moved on at such a pace that I had to choose between watching the images or reading the words. I did a bit of both and had mastery of neither. Entrance to the upper level was via an exterior staircase, leading from the garden. Up we went and it was like entering a swimming baths. All the children were there, jabbering together, with women trying to form them into groups and then two by two lines. They drained from the room and it breathed a gentle sigh.

Outside on the street we skirted around the echoing sound of high-pitched excitement, trying to head away from the noise. Unfortunately we would just be lulled into a false sense of security by the dwindling volume when a new crescendo from another faction would erupt. Then, eerily, all was peace. We surmised the whole school must be ensconced in the thick walls of the cathedral. This we had toured it with our girls last year; viewed the display of antique musical instruments, shuddered at the relic (a preserved arm, not unlike the hams they have here), searched for and found the Holy Grail. The better part of valor was to give it a wide berth this time. One of the back streets led to a small square in the far corner of which a few tables hugged the shade of some trees. It looked too inviting to pass up. They had a daily menu hand written and photocopied with about three choices of starter, main and desert. Fearlessly we opted for the Valencian paella, which has rabbit, chicken, mushrooms and snails, instead of our usual seafood. It was an excellent, much richer and earthier than other paellas we have sampled, and even the snails went down and stayed down. Replete we set off back to the underground. There was a small hitch when the machine swallowed John’s ticket as it turned out he had only bought a single on his second go at buying our tickets this morning. Once again I was one side of the barrier and he was stuck on the other. This time John had to go to the ticket office to buy another single. Told you my switching tickets on him earlier had been a smart move.

This entry was posted in Sightseeing and tagged food, Metro, Valencia. Bookmark the permalink.