We should have been leaving El Arenal today, sailing off the Cabrera Islands, just off the coast of Mallorca. The Cabreras are part of a nature reserve and it is forbidden to even visit them without a permit. To stay there we have to apply for a permit and book a buoy to tie on to, anchoring being a complete no no. John applied online, filled out copious forms and entered his credit card details. We heard nothing back, but then it was the weekend, so we decided to wait. John checked his e-mail on Monday morning and still nothing. He phoned them up. Apparently the website sometimes drops the final screen. He should try again; there should be an instant acknowledgment. He did and there was. The buoys for tonight had all gone, so we are booked in for Tuesday and Wednesday. It seemed silly to move just for the sake of it, so we decided to go back into Palma and look round the castle, Castillo de Bellver, a rare circular castle on a hill to the north of town. Off we trotted to the taxi rank, which was beginning to seem like a personal service. John asked for Castillo de Bellver in his best Spanish and we were off on our own Bouzas style adventure.

Out along the road to Palma through the froth of pink bushes and the broken windmills and then, on the outskirts of town, off at a roundabout and into a side road. We pulled up at what looked like the back of a retail park, lots of high brick walls, topped with barbed wire, impersonal and deserted. We started shaking our heads and neither of us moved to leave the car. John asked again for the Castillo, the castle and, after an awkward moment, realization dawned on the face of our taxi driver. He apologized for his lack of English, held his wrists together and explained carcel was jail. He had brought us to the main prison. We all laughed. Just as well we hadn’t left the car, I don’t expect it’s the easiest place to pick up another ride. Back into town we went, with our driver still apologizing into the rear view mirror. It’s probably a bit mortifying to have mistaken a couple of tourists for prison visitors or worse. He announced that it was a set fare to the castle, five Euros less than was currently on the meter. This was very decent of him since we had not come very far out of the way. This time he took us through the city center and up into tree lined streets, which looked much more promising. The houses petered out and we spiraled up through the woods to the walls of a proper El Cid castle. 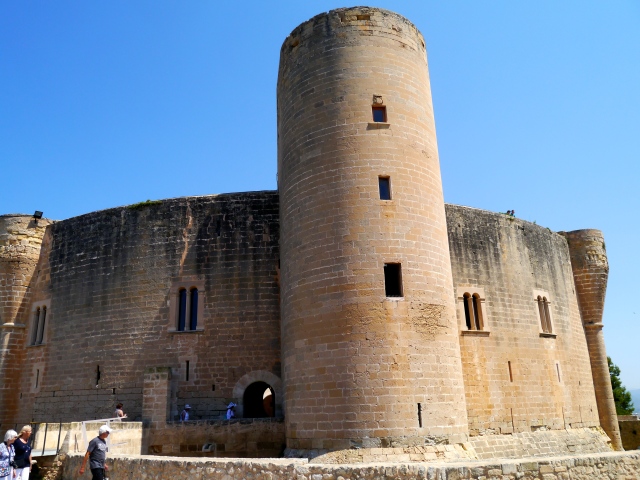 There were magnificent views over the city to the sea in one direction and across to wooded hillsides in the opposite one. The castle is a two- storey stone circle set on a square-ish walled foundation, with round towers in each of the corners of the square, one tower being of much greater height accessed only via an arched bridge from the second storey of the main circle. There is a moat between the outer square wall and the rest of the structure, which we entered over a wooden drawbridge. 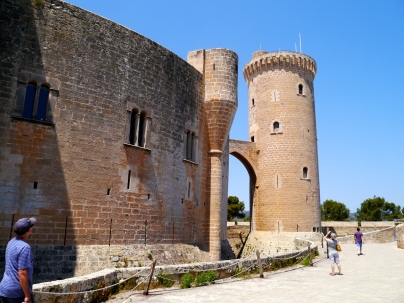 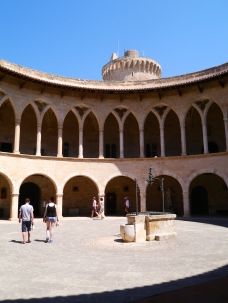 Once inside the windows into the central courtyard were much larger and more ornate with an elaborately arched walkway all around on the second level. We went into various rooms with models explaining the history of Mallorca and then went upstairs where some of the rooms housed an art exhibition. 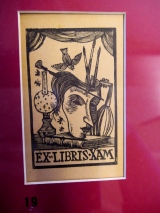 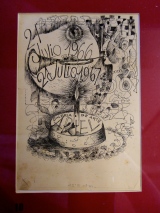 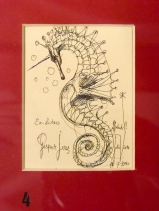 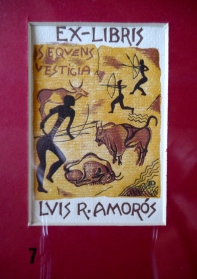 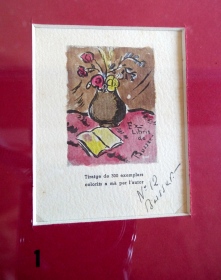 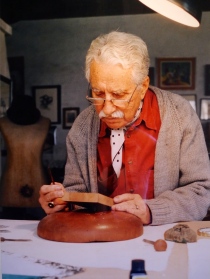 This turned out to be a collection of bookplates, something of an art form in Spain aimed at those with personal libraries. The collector was an artist himself with the pen name Xam and I had a marvelous time looking round the various prints till the lights began to go out. At first we thought they must be on some sort of timer to preserve the works and pottered off into the next room, which contained an oil painting of James I in his Viking crown. A man shut the door to the outside on me waving me away saying Vamoose. Apparently the castle was closing for siesta. We quickly backtracked through the rooms and made a break for the stairs up onto the battlements. From here we looked round at the views and down at the caretaker closing doors and shooing people out below. 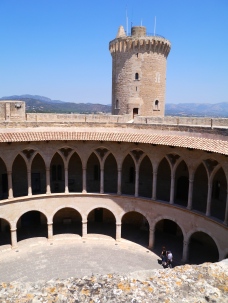 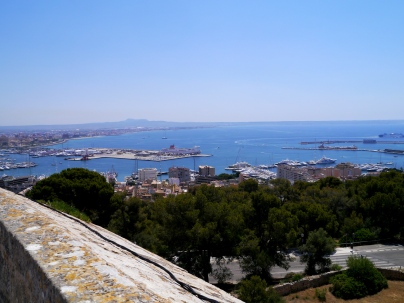 Finally he caught up with us and we had to make our way down and out with the remaining stragglers before the castle turned out to be a jail after all.

5 Responses to Go to Jail, Go Directly to Jail!