We woke early on Saturday too, so thought we would set off, do a bit of sight seeing, before the day became too hot, and call at the supermarket on our way back. This time we took the map. The first point of interest was not on it, just a number one and an arrow pointing off the paper. The second however seemed to mark the start of a line of Roman bits and pieces ending conveniently at the Supermercado. To start there was an amphitheatre at number ten. In the photographs it looked spectacular, so we set off climbing a steep incline and skirted the dilapidated curving walls till we arrived at an entrance that would do justice to an old fashioned cinema It was all boarded up, peering through the cracks the inside was utterly derelict. So much for the spectacular photographs. Moving on through the University campus we headed for site two, the Centre for the Interpretation of the Punic Rampart. We will never know. The Centre was enclosed behind impenetrable glass walls. Next we could find no sign of the House of Fortune, apparently only a mosaic floor remains and it has taken refuge beneath some apartment buildings. We gave up on the Augusteum and the Forum District. The trouble was none of them opened until eleven o’clock and it was still before ten. Supermercado did not let us down and we returned to Lyra with our supplies.

After lunch we set off again. This time we tackled it from the opposite direction and went in through the Roman Theatre Museum. This very new and impressive building displays finds made during the excavation of the amphitheatre. You go through a tunnel into the crypt of a ruined Cathedral, which had originally been two rooms of a Roman Villa. There are mosaic patterns on the floor, which we assumed to be replicas, as we were allowed to tread all over them, while other bits of floor were protected by a floating deck. Then came a light filled three-storey space with escalators. On the different levels were displayed pieces of architrave and column, some with restored sections. The restoration was deliberately different from the original, but sympathetic enough to give a feeling for the grandeur of the undamaged artefact. The top storey housed a model of the amphitheatre, which had been conceived by Augustus and looked very grand. We left the building on that level and emerged into the mid section of the amphitheatre. Here the same principle of restoration had been used on a massive scale. Stepped seating spread out in an arc, ranging up and down from where we stood; slightly above the seating to our left an intriguing cave mouth yawned, below to the right was the stage and a clutch of intact columns, behind, when we turned, were the ruins of the Cathedral. Surrounding the site were modern buildings, the propped up facades of older ones, and some shabby apartment blocks with washing across their balconies. A large piece of graffiti art looked out from the blank side of a building. Into the distance spread the city of Cartagena, over the plain disappearing into the haze of distant hills. From this hill groups leaned over the perimeter wall, taking in the vista for free. After exploring we too headed off up the hill, looked out over the port and finally climbed to the fort at the top, which housed a museum explaining the history of Cartagena. This took the form of a couple of films with English subtitles for fast readers, replica artefacts and strange, little tableaux, where projected figures populated tiny models. We realised the derelict amphitheatre with the marble front at the start of our morning explorations had been the old bullring. We also discovered there was a launch pad style lift and bought tickets to go down in it. Most people come up that way and walk down through the ruins. 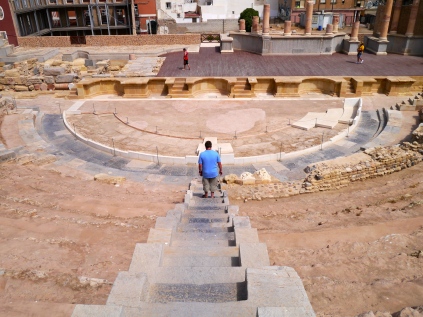 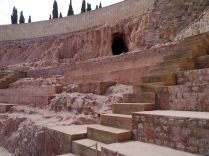 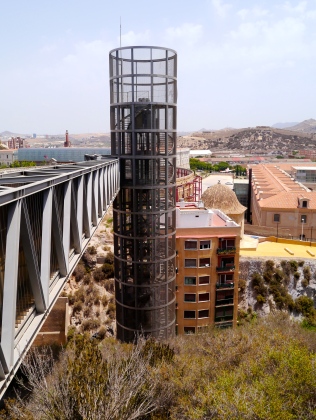 That evening we discovered another amazing restaurant, this one serving local dishes, but to gourmet standards. Even so it was no more expensive than last nights Italian. We started with a cold garlic and monkfish soup, served in a glass with a sliver of cheese toast and a manufactured olive globule to burst on the tongue. I know it sounds bizarre, but in fact it tempted me to run my finger round inside the glass to extract every last morsel. I resisted, but it was a close run thing. Next we shared a thick steak, fried on the bone, and chips. Then John had chocolate brownie and I demolished a gooey chocolate fondant. We were both very full, and are now spoilt for choice as to where to take Lara on Thursday.

This entry was posted in sight seeing and tagged Cartagena, food, Lara, Romans. Bookmark the permalink.