There is only one train a day to Ronda and we were up early to make sure to be on it. The journey itself is a treat. At first you travel through neat orange groves, where the soil is the same colour as the ripening fruit. Further away are conical hills, covered in scrub and dotted with white painted houses with pantile roofs. Climbing higher the glossy green of the orange trees give way to looser, silver rows of olive plantations. Then the train goes into a tunnel, a long one. Emerging with a roar, the blistering light shines on sheer rock precipices. A green river rushes tortuously far below and directly opposite are narrow walkways for hikers. From the train the cranky nature of these footpaths and the perilous state of the rusted metal supporting them is all too apparent. I just hoped the track beneath us had a less hazardous structure as we hurtled into the darkness of a second tunnel. After a sequence of strobe lit glimpses of the soaring rugged beauty we emerged to a high plain, where olive groves, planted in tan soil undulated with wheat fields, the grain already ripe and buff, streaked occasionally with a graze of poppies. In the distance were further sharp peaks. I must make prints based on this landscape the colours alone are an inspiration. 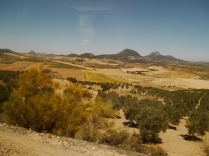 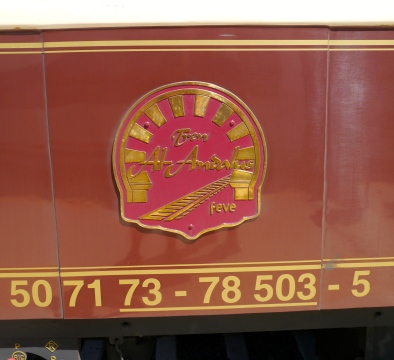 Eventually we arrived at Ronda, where we had come to see the old town and the breathtakingly high bridge across to it. There were no signs to point the way from the station, so we followed our fellow travelers and were soon jostling shoulders with hoards of shoppers in a modern looking town, with a much flatter geography than seemed likely from our research. Eventually we zigzagged our way to the tourist information office, which was situated near the edge of the precipice we had expected to find. We had not prepared for the scale. Photographs of the bridge show the narrow chasm it fords, but the town is on the edge of a plateau, with sheer rock faces dropping to reveal a daunting panorama of the plain below and distant mountains. A girl played the harp in a bandstand at the centre of a fan of viewing platforms and we joined the other tourists taking photographs, which cannot hope to convey the spectacle. We strung along with our fellow tourists meandering round the parapet towards the bridge. The New Bridge, to denote it from the older much less ambitious one, set away from the ravine, plunges narrow and deep, a Victoria Falls of a bridge. On postcards it has three archways, all are narrow, with the central wider one supported by a smaller arch low down, currently filled in. The top of the bridge is utterly innocuous, the retaining wall reassuringly ordinary and traffic rumbles across along with pedestrians. Look over the edge and you plunge giddily down smooth stone face, the lines of the arches seeming to converge. Once across we were able to see the other equally vertiginous face before the river turns a corner, so that the old town stands isolated on a soaring pillar of stone. 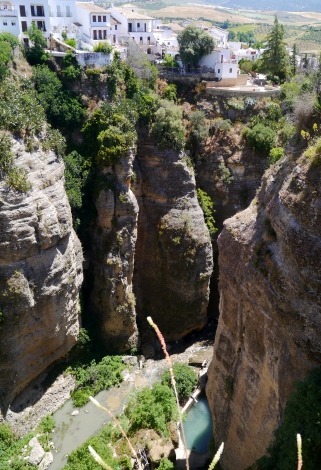 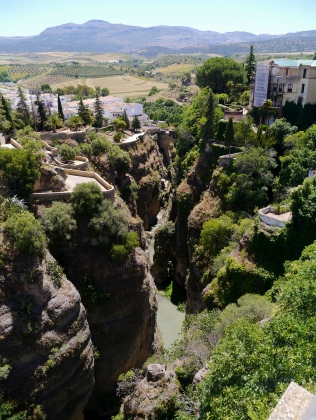 Stepping away from the bridge we wandered into the old town map in hand. Once off the main street it was remarkably peaceful there. We searched along the narrow streets and found the hanging gardens, which overlook the bridge. As we approached a peacock within let out an ear piercing call. The girl on the desk explained his mate had wandered off, so every few minutes he called for her. He stood droopily by their food where the dappled shade camouflaged his gorgeous tail feathers. Our visit was punctuated by his unrequited siren call. The garden was small, but lovely with a white garden, where pots of geraniums and daisies surrounded and water lily clogged pool fed by a wall fountain from the rill above, at its centre. Stone steps disappeared into the cliff face on the way to an old mine entrance and the river far below, but we stayed in the garden, so do not know if a wayward peahen was down there hiding. 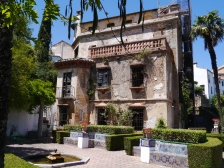 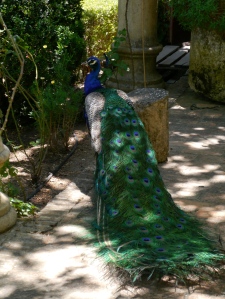 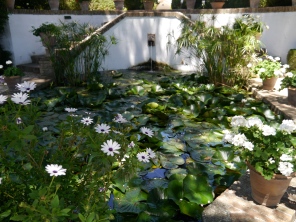 We headed through the maze of pretty streets, hardly encountering a soul and came out on the opposite town wall, to a shady square with a Spanish guitar player. After another consultation with the map, we wound round the edge of town to a combined palace and museum. We stood by the entry prices behind a woman waiting to buy postcards, to pay for entry. There was only one counter and some Japanese ladies were deciding which souvenirs to buy, wandering back and forth from the till into the small shop. A group of people walked past us and in through the door and the girl serving started up, harried and disturbed by this, but said nothing. We waited a small queue formed behind us. Finally all the ladies were served and the assistant told us entry was free today. Feeling foolish we headed on in. Followed by a small, disgruntled crowd. I found out later some museums are free to EU citizens, so maybe she was dubious about whose who walked in, but usually you still need a ticket and say where you are from, which they make a note of.

The villa part of the palace was lovely. More interesting enclosed courtyards, leading on to garden rooms, fountains, hedges and flowers in geometric simplicity. The museum part was distinctly odd. One minute we were in an upstairs room looking at objects in glass cases, and then we passed through a doorway and into a fibreglass cave, with an arrangement of old bones in one corner, behind glass. Hastily exiting the cave we walked along the corridor to find a caveman mannequin, who had seen better days, sat huddled over some flints, in the room behind him a standing female regarded him stonily, the back wall of her room appeared to be a thatched roundhouse. Gamely we ducked under the thatch, to find it gave access to further similar exhibits until we reached a dead end where a couple of figures were busily smelting iron in a corner. It was probably very avant-garde when it was put together, but seems sad and dated. Back we tracked to the present day and out past reception, not tempted by the shop.

On the street it was hot, so the shady square by the convent with tables set under parasols was a welcome place to stop for a late lunch of cold beer and warm tapas. Under the trees opposite a young Johnny Depp sat on a low wall playing classical guitar. Gradually people we had encountered on our travels filtered out from the various corners and we were all held under a spell in the calm.

Finally we had to head off for our train. Back at the bridge all was still hectic with trippers, strange, but wonderful that so few explore the enchantment of the old town. On our way back John had wanted to look at the bullring museum, but on arrival there we could not face it. Outside was tethered a poor horse, dressed in full regalia, wilting in the hot sun, a blackboard in front of it offering rides. We headed back through the shopping center, pretty much closed, but still thronged with people and found our way back to the station with surprisingly little difficulty.