To Marbella and Beyond

We set out from Estapona into a glassy calm sea and a clear, blue sky. Off to starboard was Gibraltar, ghostly in the sun, from here it looks like an island, but then so does Africa. Behind us the big brown mountains towered, every line and crevice clearly etched by the slanting morning sunlight. We turned to starboard and set off on our course, a little sooner than we planned, to avoid a fishing boat, turning in a wide circle ahead and sat back to enjoy the ride. We had expected to have to motor, so changed our planned destination of Fuengirala to Benalmadena, as that took us a bit further on our way given we knew we would make eight knots in a straight line under engine. Motoring is less fun than sailing and the noise monotonous, but in the absence of lobster pots there is little to do. I had a snooze, doped by the seasickness tablets. So far the Costa del Sol had been much more attractive than we had expected with the dramatic mountains plunging down to the sea. When I woke the white Sierra Blanca mountains awesome, but the high rise littered their feet along the shoreline. From our distance they looked like so many circuit micro chips stood on end in clusters. We were passing Marbella, but the buildings continued in a ribbon along the coast. As we neared our destination the wind picked picked up annoyingly, so we had to moor in a force six again. The harbour here is massive, but we are squeezed into a narrow slit between two tall motor cruisers. John did really well steering into this one. We have come exploring. It is a little bit grotesque so far. 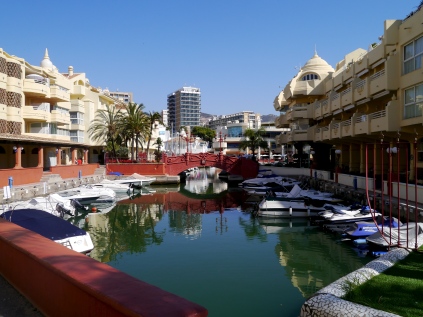 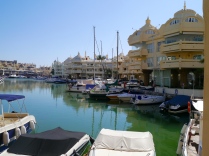 The Marina is all part of a resort complex built around a lagoon. The style gives a nod to Moorish architecture and a wink to Gaudi. The buildings look to be molded from the swirling mounds of ice cream they sell here, in suitable colours of pistachio and vanilla. Three story apartment blocks mushroom on four islands, surrounded by similar structures on the surrounding land holding restaurants and bars. Luckily these are all on the opposite side of the islands to the part of the harbour we are in. The islands are linked by a series of Venetian style bridges, lit by muti-bracketed streetlamps. The look may improve with a bit of age to add contour and plants to conceal. There is a theme park feel. It would hardly be surprising to turn a corner and run into Ja Ja Binks chatting to a couple of Jedi and see Empire white storm troupers policing the walkways. As it is, a promenade along the seemingly narrow walkway past the restaurants is to run the gauntlet of a series of folk, whose job it is to hook in customers. During daylight hours the opposite side, along the waters edge, is riven with hawkers trying to take you on a boat trip or sell you a hat or bib with a name embroidered on it as you watch. Through the permanent operators weave black youths with arms full of watches, sunglasses and baseball caps and big smiles, it all very quickly becomes very wearing. We did expect such a modern development to be served by wifi with excellent bandwidth, but so far the experience has been of an intermittent weak signal in a bar vamping house music. The signal did not even stretch as far as the terrace.

This entry was posted in Sailing and tagged Marbella. Bookmark the permalink.