The Marina Puerto America is built in the remains of an old fish dock and they have been careful not to change the ambience of the place. Manoeuvring is tight, but John’s steering was spot on and our lines were caught by a marinera and a kind Australian lady from the next boat. We arrived mid afternoon after a much shorter journey than the one from Vilamoura to Mazagon. Even so after the rollercoaster journey I felt exhausted and went to bed for an hour. John was hungry rather than drained and I heard him rustling packets to make himself a snack, before I fell asleep. This meant that when we walked into town later in the evening I was hungry and John very tired. It is a fifteen minute walk, first through the docks and then along a pleasant esplanade along the sea front. On our way we passed the statue of Gades, an allegory of the city she stands gazing out to sea, luring her sailors home. The sea still looked pretty rough. Once in town we came down from the high walls and plunged into the labyrinth of narrow streets.

Try as we might we could not find an open space with cafes and restaurants. When we returned the following day it was hard to imagine how we had managed to miss them so comprehensively. Eventually we stopped and sat at a table outside a bar in a busy thoroughfare to regroup over a drink. Our waiter was very busy and rather stern and tapas was not on offer.  I could have taken a bite from the table. The whole of Cadiz seemed to be promenading past us, all going at quite a smart clip. The air was full of the babble of their chatter. John looked mesmerised by the constant flow of people. We set off into it again trying to find a restaurant following John’s phone. This time we found a square, with a restaurant on the corner, but it was the wrong one, so it was back into the narrow, thronged streets. I was beginning to recognise people we had passed before. Finally we came out into a quiet square, with a restaurant in the corner, still not the one from the phone, but strategically placed behind a taxi rank and we went in.

By this time anything would have tasted good, but the soup we were given, as a pre starter was truly excellent. It was a teacup of chicken broth, with a sprig of large leafed mint on the saucer, which our waiter said we could decide whether or not to plop in the soup. We both took the plunge and the brew was miraculously reviving. After a thoroughly enjoyable meal we then stepped  out  straight into a taxi home. The driver weaved thunderously through largely empty streets, so narrow that at one point a woman with a buggy had to dive into an alley to let us pass. We stopped for nothing, flashing at each crossroads and popping out like a cork onto the main road to the docks. We slept very well that night.

On the following day we set out again with the plan of circling round the outside before venturing back into the web of alleys. The sea was even rougher with white horses all the way to the horizon and waves crashing onto the cement blocks below our walkway casting spume high into the air. We walked along the perimeter, first along the walls and then through the various narrow pleasure gardens running alongside them to the fort of Santa Maria. It was free to wander round inside and there were immaculate toilets. Further on we stopped for coffee overlooking the beach and then made our way to the towering hulk of the cathedral. 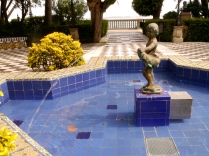 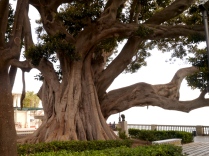 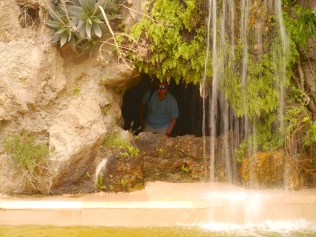 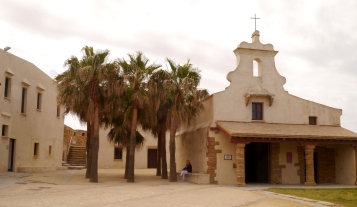 Finally we had found a small square with tables set outside simple cafes, so we sat and had lunch, steadfastly refusing a stream of pedlars and beggars working the tables. One black girl cut a striking figure in her bright robes, arms festooned with the jewellery she was selling, a sleeping baby swaddled to her back and a basket of smaller trancklements balanced on her head. As we chose not to buy from her I did not feel it right to take a photo. After lunch we went into the cathedral, which was not free to enter. Inside it was pale grey and soaring. Nets had been strung across the vaulted ceilings to catch flaking plaster, which lay in dusty patches high above us, lending the place a neglected, Miss Faversham sort of air. We went on to the art and archaeology gallery, which was free and we very much enjoyed the archaeology section, with its’ Phoenician remains of intricate jewellery and a pair of dumpy sarcophagus.

Then came the frustrating part of the day. We tried to buy a data only sim for our Internet dongle, rare as hens teeth they are. Neither Moviestar nor Orange were very helpful. Somewhat frustrated we walked to the station to find out the train times to Seville and then wandered around a bit till we came across a supermarket, where we replenished our supplies. Footsore and weary we decided to have tea on the boat. That was when we realised a Mariachi band rehearses near the marina. The discordant melody continued well into the night, the same piece over and over again, fading away and then blaring loudly forth. We think they must march up and down as they play. They certainly need the practise. We remembered the Alamo.

This entry was posted in sight seeing and tagged archeology, art, Cadiz, food. Bookmark the permalink.