The final leg of our journey this year was a voyage of some eighty miles to Lagos, where we are to overwinter. It involved going round Cabo de Sao Vicente, the other end of the earth. We set off at dawn. All was quiet and still, but there were stirrings along the pontoon as the two Dutch boats we have been threading our way along the coast with were also setting off. Seadrive was out before us and looked pretty in the early morning light as we passed her.

The wind did not blow as forecast and yesterdays unscheduled blow had set up a robust swell, which I struggled with. Hours passed. We saw a couple of dolphin, but they were busy fishing and stayed in our wake. Finally the Cape crept closer and as we rounded it the wind came up and our hearts rose at the prospect of a nice final sail, a fast reach into Lagos. The wind promptly died. The same could not be said for the swell.

The Atlantic swell met big waves coming out from the east and set up a lively interference pattern. Lyra rode it all, but it was not the most comfortable of passages. 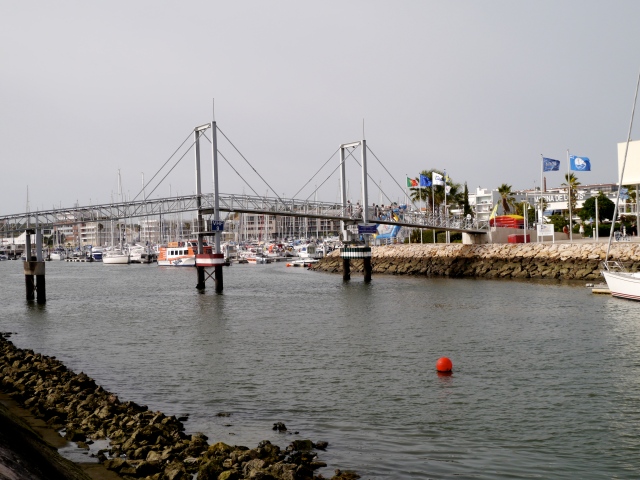 The entry into Lagos is up a long walled passage at the end of which is a lifting foot bridge, where boats have to radio in and wait for it to open before they can pass through into the marina. It brought back worrisome memories of queuing for locks, long ago on our holiday with Mum and Dad on the Caledonian Canal. Fortunately it all went well. We tied up at around six thirty. It felt like a very long day. Next day we met up with the crew of Seadrive. They had planned to anchor off behind the Cape, but had decided it was untenable in the chop. They were moving on that day towards Alicante. We wished them better winds and calmer seas. That will be us next year.

Lagos seems overrun by us foreigners, at least as far as we have seen. English girls are waitressing in the bars and all manner of British food is on offer. A stepping stone to home. We are spending a few days settling the boat down before flying back on Wednesday.

This entry was posted in Sailing and tagged Lagos, Memories. Bookmark the permalink.