We were beginning to be rather blasé about the dolphins, waiting for them to show up as opposed to hoping that they would. At first we saw nothing on our way to Cascais, then John spotted a tuna and finally there was a big dolphin on our bow. We could see a few more in our wake. Cutting across the wake behind them came a yellow fishing boat.

John said I would get a good close up and sure enough I did. They were busy laying net. Hurling swathes of green nylon over the side to sink and form an underwater train. I felt sick at the thought of the dolphins and that net. Thankfully John soon saw them again, first the large one ploughing along at the bow, then the others cavorting alongside. They stayed with us for ages, our longest sighting yet. When we left them behind they were circling in our wake, obviously doing their own fishing well away from the net.

Although the sailing was pleasant, we were zigzagging about making quite slow progress, so at around four we put sails away and the engine on, so as to reach Cascais at a reasonable time. As we turned in to the final stretch the wind blew up to force five and the surface became frilled with white horses. It was too late in the day to sail, so we motored into the shelter of the harbour and headed for the marina in the top left corner. It was another case of tie up outside the office and complete paperwork before heading off to a berth and again the pontoon was a hive of activity, but this time we had a helpful marinera to take our lines. He spoke perfect English and said he would also help us berth. He was as good as his word and sent us off with a request that we go slowly as he only had a bike. This is a huge marina and our berth L23 was right at the far end, near to the cafes and bars. As we chugged slowly along we could see our helper flickering between the masts, peddling hell for leather along the opposite wall, like Tony Curtis in “Some Like it Hot.” We rounded the corner by the wall on our side and peered about, trying to spot our berth. There he was, minus bike, waving at us. He helped settle us into position and then was off to do the same for the next boat.

There is a pleasant walkway from the marina into town, indeed a walkway extends along the coast and we had a gentle evenings wander along it, past the crowded beaches. 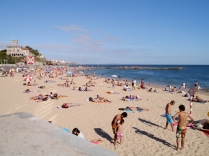 Bands of youths were lined up, daring to jump from the piers into the Springs high tide. One lad made an enormous leap into the sea right in front of us, but the ladies he jumped past gave him a hard time about it and proved even more fearsome than the drop. We have walked into town several times and explored the shops and stalls. There is a very up market area inside what used to be a fort, with a hotel and posh restaurants. There are some lovely looking bistros in town and many enticing places to sit out for a drink. There are even a couple of Irish bars and several Indian restaurants. After the hot days out our evenings have so far been spent either eating on board or in the marina restaurants. There are several to choose from and all have been good.  It is a very up market marina with a Riviera feel. They certainly know how to charge, but we have been happy with the service and it is by far the nicest place we have stayed so far in Portugal.