Every Sunday in Galicia seems to elicit either the sounding of guns or the setting off of fireworks around mid day. Just lately this has been extended into the week. We heard the booming Monday morning, along with the sounding of foghorns and wondered if the shots were sounded to warn of the fog. As we were due to spend the day with an engineer, having a look at fixing our generator we did not really pay much heed. The generator was a worry. We had it installed by Berthon over the winter and had been running it at regular intervals, not because we needed it, but to keep it happy. On the morning we were due to set off home, four weeks ago, John tried to run the generator, to set it up for our absence. It would not turn over. He tried a few times, whilst I read the manual.  The manual was a gem of pigeon English, with some cute illustrations of the generator as Wagner’s Brunnhilde.  The only clear message was a dire warning against pulling water into the engine, at which point it made clear all bets were off as far as the guarantee was concerned. John was sure that as the engine would not turn over it would not be pulling water in. We e-mailed Berthon and they were much more helpful and thought the battery was not charged enough to fire the diesel engine. This sounded sadly familiar. We had lost track of yet another needy battery.  At this point we had to set off home, leaving Lyra with a faulty generator and a dodgy hatch.

The hatch had been another small mishap, just before we were due to leave. The hinges had snapped and John had ordered new parts to come to home and had fixed the hatch down temporarily, sealed with an application of plumbers grease, which seemed to have worked in the fierce downpours we then experienced.

We had been relieved to arrive back in Spain, primed with a battery charger and new hinge fittings and find all was as we had left it. John immediately set the generator battery to charge overnight. Next day the generator still did not manage more than a dry cough. John looked at the dipstick and found water in with the oil. Woe. We kicked the problems into the long grass till after the family holiday. On Sunday the holiday was definitely over and we had a go at the hinge, so that if we could not fix it we could present the engineer with the full calamity on Monday. The hinge repair was a bit fiddly, but all in all went surprisingly smoothly. We were less confident about the generator.

Two men arrived late morning. The engineer and his apprentice. They spoke no English, we spoke no Spanish and knew even less about diesel engines. Diesel engine maintenance was the one course we had not taken over last winter. I fear it is on the syllabus for next winter. We showed them the engine room. Being a centre cockpit Lyra has an extensive space under said cockpit devoted to the engine accessed by it’s own small door. The generator sits in the middle of this space. Men generally wax lyrical about our engine room, the amount of room, the access to the engine, virtually a chaps own shed away from home. I am not sure it has the same appeal after having been crouched in there a while. We pulled forward the companionway stairs to let in a bit more light and air. John chatted to the engineer through the gap and the apprentice took instructions and passed tools through the small door. They seemed to have an accord, there was a lot of tutting. Eventually the lad was sent off and returned with another young man who spoke English, Spanish and engine fluently. There followed a very thorough diagnosis, the outcome of which was that they were going to change the oil, then the engine might start, if not there were a number of suspects of varying expense and availability. If the problem involved spare parts we would be advised to leave well alone and wait till the winter layoff, after the oil replacement the engine would be ok to wait. They would go now for the oil and be back later.

Six o’clock that evening the first pair were back. The oil was changed, the cylinder flushed with some magic spray. The engine would not start. Back came the translator, they had done all they could, we all looked sad and resigned. We thanked them for trying and the two younger men left up the companionway. John rocked the stairs forward and the older guy was still in there, sat astride the generator, not a man to be easily defeated. He had John try the starter again and it almost caught. His assistant returned and there was further tinkering and spraying, two more false starts and then the generator throttled up and chugged away. Tantalisingly he stopped it and started it up again twice, just to be sure. Each time it sounded better. Our hero showed John how to top up the oil and use the magic spray and emerged triumphant. A huge worry lifted by one man’s persistence. What’s more, next day when we went to pay we were given a discount on our berthing fee, because we had had the work done there.

This allowed us to set off for Baiona on Tuesday. The weather was still murky, so we motored along slowly, taking the long way round to avoid the hazards. Baiona is set against steep wooded hillsides, and must be beautiful to approach when they are not shrouded with mist. 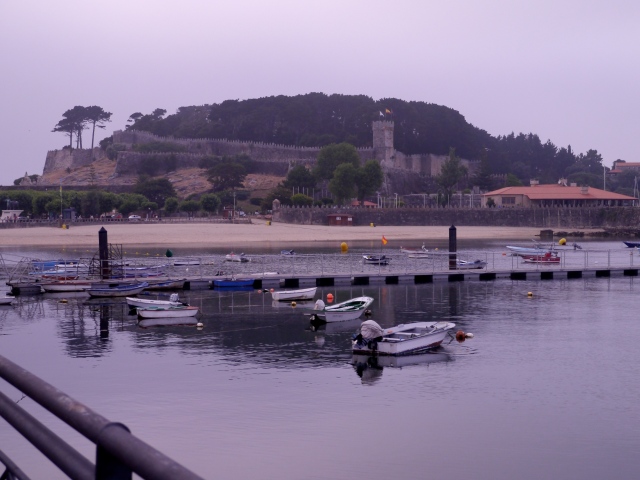 On our arrival we could hear the familiar booming and fire cracker noises coming from the old fort. The girl in the marina office explained it was a holiday and the supermarkets were closed. We had a wander along the promenade and saw where a replica of the Pinta, one of Columbus’s three ships, jostled with the other masts.

We walked round in front of the fort to see the rocks we had come past way out in the mist of the bay. We wandered through the narrow streets of the old town and passed an open doorway through which was a splendid altar. Just beyond this a stage had been set up and plastic chairs were being set out in rows. The streets around were thronged with people drinking outside bars and children playing. It reminded us of Weymouth on the bank holiday back home. We found a quiet restaurant up a side street and had just ordered when the booming began in ernest. It was like a very slow, rather uneven twenty gun salute. Then came the sound of bagpipes and drums. A procession was winding round the streets around us. We saw it pass the end of our alley. First silver lanterns carried by children, so that they wobbled precariously, then the pipes and drums with elaborate feathered head dresses, then smart men in suites, then a huge effigy of the Virgin all in white on a bed of white flowers carried at shoulder height leaning forward precariously at a rakish angle and finally a brass band playing soulfully. The music reminded me of the old John Wayne film about the Alamo. We discovered later it  is a ceremony in which flowers are spread on the sea and the Virgin paraded to commemorate fishermen every year on July 16th.

Today the booming has stopped. It is not a holiday and the weather has been glorious. After the holiday the shops were packed, so the food shopping left John traumatised. We had a lazy lunch and later walked up and around the fort. The views were spectacular, the battlements were littered with the cardboard remains of fire crackers. We also saw the old canon pointing out to sea, still there to repel invaders. Our plan is to stay on board tonight, for tomorrow we are off to Portugal. 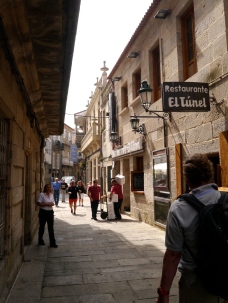