The Curious Incident of a Dog in the Nighttime

Wednesday June 12th was forecast to be a much better day than its predecessors, with the wind due to drop and the sun come out as the day went on. We felt ready to move on, although San Vicente is an idyllic spot it was becoming unsustainable as, after the weekend, the bars and shops stayed locked fast behind their shutters, with the notable exception of the bread shop, for which we were most thankful. It was a short passage, so we waited awhile for the promised better weather, paid our dues and manoeuvred very smartly out of the marina. Once out of the shelter there was still quite a breeze and the sea was rather lumpy, so putting the sails up felt a bit uncomfortable. Once they were up and reefed though, we beat along at quite a lick, cutting through the chop. The turn to round the headland brought a more comfortable point of sail and we chose to travel beyond our waypoint, before gybing to enter the Ria at a good angle. Gybing is so much easier with the automatic winches. Ria Arousa is the largest of the Spanish Rias and has a number of islands and rocky outcrops, adding to the beauty of the surroundings and the shelter afforded from both the wind and the swell. There is an increase in the complexity of the sailing as a result of these obstacles, but we managed to cover most of the length with just a couple more gybes. 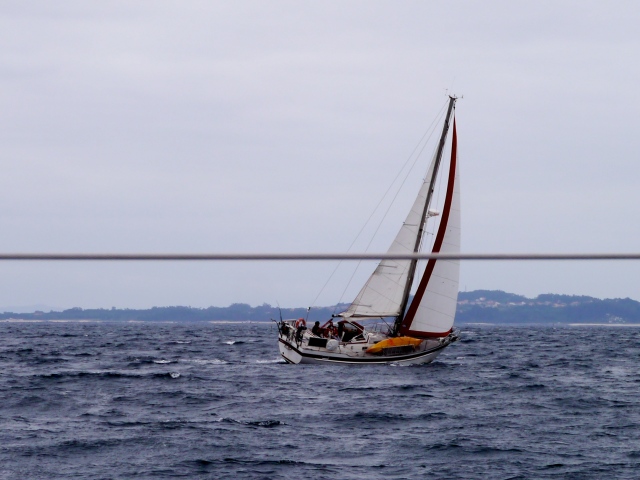 At a narrow part we met another sailing yacht and low and behold she was another Najad! We waved to each other as we passed by and I took photographs, to have an idea of how we look under sail. As we neared Vilanova, our destination, we could see the long rafts of the mussel farms and turned to wind to take the sails in before we entered the passage between them. We motored down the checkerboard of rafts looking left for the spur into the marina. Having reached it, there was an obvious wider channel, though we still needed the red and green posts to identify the marina entrance, as the stone of the harbour walls blended together.

Once inside we were met be a very cheerful marinera, who directed us to one of the longer finger pontoons near the entrance, and made short work of tying us up. The pontoon here is not such a long step down either. We headed up to the cabin with our boat papers and were told we needed no keys for showers etc, there would always be a marinera to let us in. This seemed most trusting at the time, as there was no lock on the outside gate and it is a busy yard with lots of equipment around. From what we could see they do a very good job. After all our self catering of late we had decided to treat ourselves to lunch. No such luck. We tried the bar at the marina and had two excellent large chilled beers, but no food, not even tapas. Undeterred we headed off into town and made for the church. It was all very quiet. We found another bar, had two more, smaller beers, but still no tapas. By this time it was rather late for lunch even in Spain and beer with no food had rather gone to my head, so John guided me back to the boat for bread, cheese and pate.

Consequently we were late setting out for our evening meal. We still felt the urge to treat ourselves, particularly we had now gone through all our perishables and the store cupboard had rather lost its charm. A further ramble round the streets of Vilanova yielded some pretty garden areas, 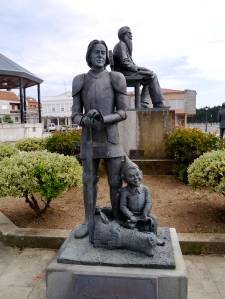 some very odd statues and a quartet of Galician pipers wailing away on a street corner. We found a few more bars, at this time serving tapas, but not in great variety. Eventually we settled for a mix of the usual suspects – calamari, tortilla and jamon, and they were good. The bar was noisy  though, with the television, showing previously broadcast football, so we decided against coffee and headed back. By that time it was dark. We opened the marina gate and a loud alarm sounded. We closed the gate behind us and it stopped. Out of the dark came a German Shepherd dog, huge, with fur like a mane. His handler was behind him, calling out in Spanish. The dog seemed to pay no heed, but perhaps he was being told to play nicely, because he seemed more than happy to be petted by John. Then he bounded up to me and I stood still and let him sniff my scent and spoke in friendly tones. Up he stood on his hind legs, with his paws on my shoulders, looking down at me with his head on one side, panting. I said “No”, rather sternly, and his handler arrived and he jumped down to be collared and held, the man walking bent over to let us through the gate to the pontoon, apologising for the enthusiastic welcome. Later we heard a deep resounding bark and knew were being watched over as we slept. Next day our guardian was fast asleep at the far end of the boat yard, but he gave the same resonant bark when we rang the bell to be let in and watched us disappear down the gangplank, before flopping back to sleep. 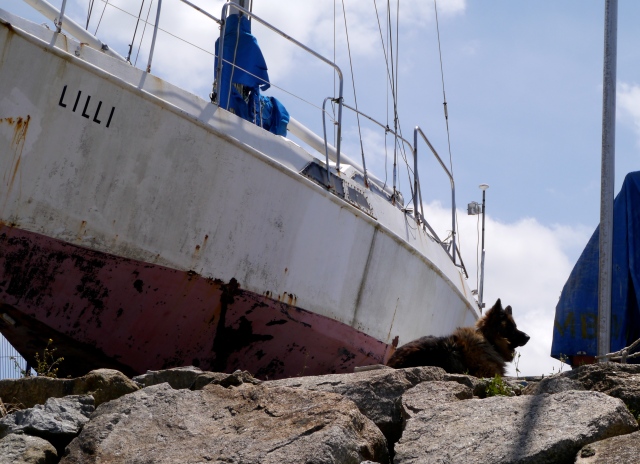 We had been out negotiating the supermarket. The staff there were really helpful, we had our loose vegetables weighed and bought fish and chicken and had the first cleaned and the second sliced into escallops. I managed these wonders by just saying yes to whatever was offered me. The sun was shining and the bells were chiming, not the church we had found, but a set of bells clearly rung by an enthusiast.  On the half hour were a few bars of All Things Bright and Beautiful and at noon a burst of Oranges and Lemons was followed by a complete verse and chorus of Ave Maria. Surprisingly familiar and charming in the sultry air. Back on board we stowed our supplies and pulled our spare ropes out from the locker to air in the sunshine. We headed off to the marina bar where we could keep an eye on them as they got on with it. This time the beers came with warm spaghetti tapas and the coffee with squares of cake. Lunch!

During the afternoon we decided to walk across the pilgrim bridge along the coast and Vilanova showed us her more enchanting face. The path wound between sandy beaches and the immaculately lawned long gardens of a variety of houses, interspersed by vacant lots of even greater beauty, where the wildflowers rampaged at will. We passed a restaurant with a pretty garden and a campsite. 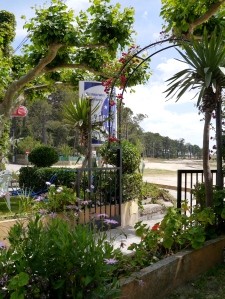 As we rounded a corner we saw the long road bridge, stretching across to an island and the town of Arousa. There was a restaurant with outside tables, shaded by  palm trees and rose arches. We sat with a view over the sands and drank chilled wine. A long way off in the estuary, John spotted a dolphin, then another and as he pointed I could see them, lots of them. Even at such a distance we could see the water heaving as they rounded up fish, weaving and jumping in an ever decreasing circle. Not good news for the fish, but exciting to think that such a large pod is to be found so far into the Ria. Worth keeping our eyes peeled as we sail around. We retraced our steps back along the quiet beaches. 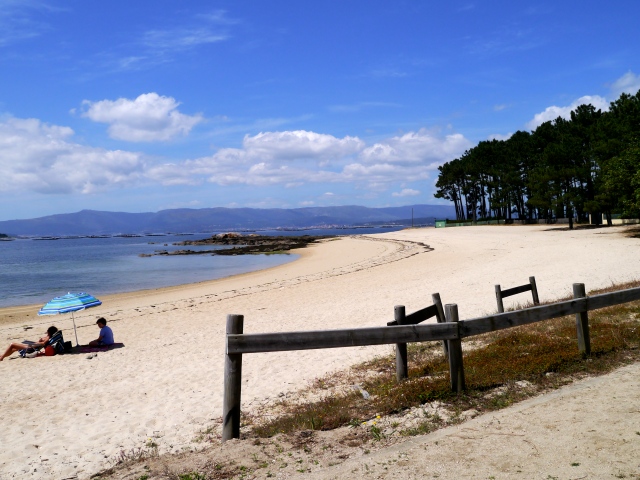 That evening John cooked the fish, which was really fresh and delicious, we played our music and stayed on board, so there were no more close encounters of the canine kind.